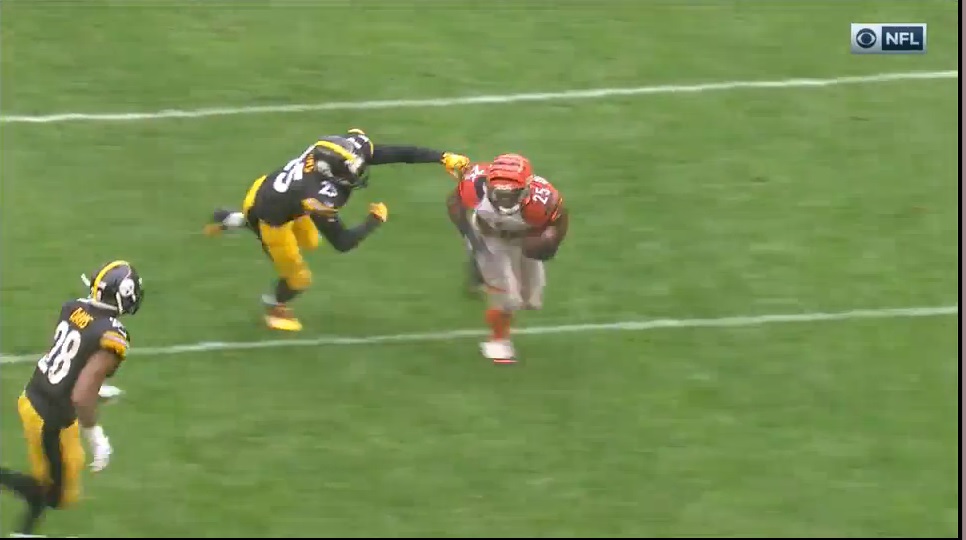 In nasty conditions Sunday at Heinz Field, the ever-improving Pittsburgh Steelers defense had another strong performance, holding the Cincinnati Bengals to just 16 points to pick up a 24-16 win.

Like I did following the Week 1 win over Washington, I’ll take a look at missed tackles by the Steelers defense and break down some of the most egregious misses against the Bengals.

Coming out of the Week 2 performance against the Bengals, once again a rookie defensive back is at the top of the list for missed tackles in a game, but this time it’s Artie Burns, who played a season-high 34 snaps defensively.

Outside of the two missed tackles, it was great to see Burns playing meaningful snaps early in the season against a division foe like the Bengals. That shows me that Burns is really progressing quickly and will be a big part of this defense moving forward in 2016, which is a real positive in my book.

Burns did tie for the team lead in missed tackles with Sean Davis, William Gay and Ryan Shazier, but I don’t think anyone on the list from the Cincinnati game had a bad overall performance whatsoever. In fact, I felt Davis improved from Week 1 to Week 2 and Shazier really showed no signs of a lingering knee injury in sloppy conditions.

Overall, it was a solid game for the defense despite the conditions. A few of the missed tackles can be chalked up to the conditions as some defenders slid off of tackles due to soaked jerseys and slick gear, so keep that in mind.

Let’s take a look at the most egregious missed tackles by Burns and Davis, so we’ll fast forward to late in the fourth quarter with the Steelers holding a 24-9 lead.

On the play you can see that Burns is dropping into zone coverage with what looks to be curl/flat responsibility. With the dump-off to Giovani Bernard in front of him, Burns is in great position to make the stop for minimal gain, but by taking a sharp angle towards the center of the field and breaking down far too early with some distance between himself and Bernard, Burns gives the Cincinnati running back an escape lane to the outside with a simple spin to the sideline after making the catch.

From there, Burns is in recover mode and can’t accelerate fast enough to close off the lane down the sideline. With Burns making the first mistake on the play, Davis is expected to come in and clean up the mess, but the rookie takes a very poor angle to the sideline and easily gets beat down the boundary for the score.

Fortunately this didn’t come back to hurt the Steelers, but the tackling from two rookies that will be counted on in this secondary has to get much, much better as the season progresses.

Now, let’s go back to the start of the game and take a look at Davis’ first missed tackle of the game.

In similar fashion to his missed tackle in Week 1 against Matt Jones, Davis comes blitzing off the edge untouched and has a free shot at the running back, but once again the rookie comes in out of control, leaving him to attempt an arm tackle on a powerful running back.

I love that Davis gets into the backfield so quickly and puts himself in position to make the play off the edge, but the rookie needs to learn to break down and make a sound, technical tackle for a loss here. Granted, this missed tackle didn’t come back to bite him on the play, but one of these games Davis is going to whiff on a tackle like this and it’s going to end up going for six points.

One last GIF of missed tackles for you and then you can go back to reading something positive from yet another win for the black-and-gold.

This play should have been an easy stop for Stephon Tuitt and Gay, but nothing is ever really easy in football, especially tackling.

Tuitt is actually in coverage on this play and reads the dump-off to Hill in the left flat perfectly. Look at the amount of ground the big fella has to cover here; remarkable.

The issue is that when a man of Tuitt’s stature gets moving, it’s hard to stop, and that’s exactly what happened on this play. The defensive end does a great job of pursuing the ball all the way across the field, but with Hill running out of room Tuitt doesn’t break down and flies past Hill, who makes a nifty move in the open field to avoid Tuitt’s tackle.

Things get messy from there, as Gay’s tackle attempt is well … very, very poor. He’s simply grasping for jersey instead of going for Hill’s legs to get the big back on the ground, allowing Hill to dive forward for another couple of yards to complete the play.

All game long we saw Gay make punishing tackles, so it was strange to see him so passive here. Fortunately for the Steelers they were able to hold Cincinnati to just 3 points here, which went a long way towards the 8-point win in the rain.