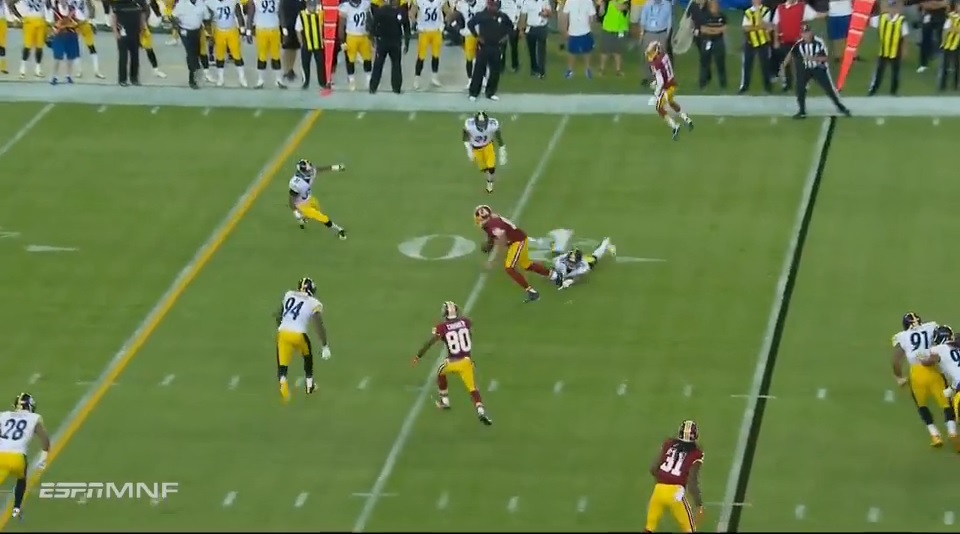 While things couldn’t have gone any better offensively Monday night against the Washington Redskins to open the regular season for the Pittsburgh Steelers, it wasn’t always pretty for the defense, which had tackling issues once again.

Like I did during the preseason, I’ll take a look at the missed tackles each and every week and see which players were the biggest culprits.

Lets start with the obvious; Sean Davis had a rough regular season debut as a tackler. Five missed tackles is certainly a very concerning number for a rookie that will be counted on to play quite a bit in the nickel this season for the Steelers, but much like he did in the preseason following his first rough showing against Detroit, Davis turned it around.

That’s what the Steelers have to hope for heading into Week Two against Cincinnati because another five missed-tackle performance from the rookie could be disastrous.

In the clip above, Davis has a clear shot at Washington running back Matt Jones, but the rookie goes low for an ankle tackle on a physical runner. That will never work.

I like the way Davis breaks down in the hole and squares up Jones, but the diving at the ankles and losing any power behind your tackle against Jones is a recipe for disaster.

With Davis missing the tackle that leaves it up to other defenders to try and get the big back on the ground. This is where William Gay comes up with his first missed tackle of the night.

In similar fashion to Davis, Gay goes diving at Jones’ lower body, which the Washington running back just powers through for the first down before a host of Steelers get to him.

Later on in the game, Davis and LJ Fort are in great position to bring down Washington tight end Vernon Davis for a short gain on the check down from Kirk Cousins.

On the play, Davis gets his arms around Davis’ waist, but Fort comes in looking for the big blow and bumps Davis off the tackle — as well as himself — resulting in two missed tackles on one short catch.

I don’t blame the rookie much in that spot because Fort did bump him off the tackle, but it’s a tackle that Davis has to make quickly in this league.

After Davis is able to shake free from the two Steelers it sets up Lawrence Timmons’ missed tackle as the veteran linebacker comes flying in out of control and whips right past Davis, who finally goes down at the 1-yard line.

Timmons was good against the run versus Washington, but when it came to tackling in the open field Monday night he really struggled.

This missed tackle from Timmons was his first of the game, and it came on Washington’s opening drive of the game.

Cousins found Reed quickly in the short flat twice to start the game. On a big third down, Timmons has Reed dead to rights near the sideline to force a punt, but the veteran linebacker seemed to amped up and came flying in like a bat out of hell, whipping past Reed into the sideline for the missed tackle.

By not coming in under control to make the stop, Timmons’ missed tackle resulted in a first down for Washington.

Also on the opening drive, Ryan Shazier and Davis both missed tackles in the open field. Davis added a missed tackle in the first half on special teams on a kickoff.

Tuitt broke free into the backfield at the snap but took a bad angle and missed Jones, while Mitchell came flying up from his safety position to dive at Jones’ ankles, whiffing badly.