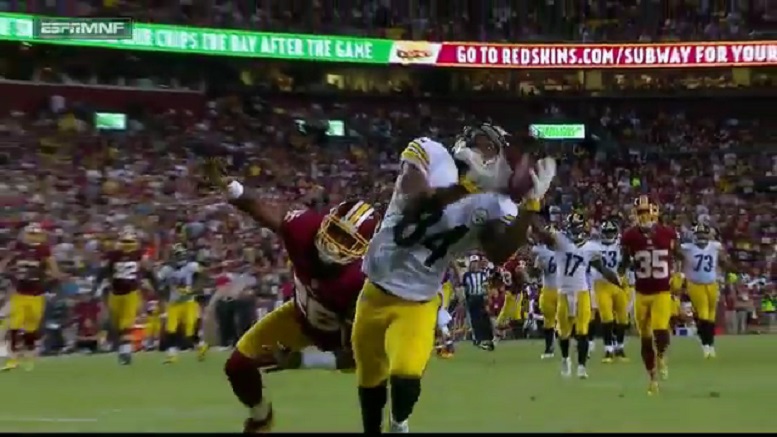 Pittsburgh Steelers wide receiver Antonio Brown had a great start his 2016 season Monday in the team’s 38-16 win over the Washington Redskins as he caught 8 passes in the game for 126 yards and two touchdowns.

Brown’s first touchdown catch in the game came on a 4th and 1 play from the Redskins 29-yard line with 5:58 left in the first half. On the play, Brown was singled up against Redskins cornerback Bashaud Breeland, who didn’t really have any safety help over the top. After an excellent play action fake, Steelers quarterback Ben Roethlisberger threw a perfect ball to Brown, who had managed to easily get a step on Breeland.

While it will go down in the books as a gutsy play call, head coach Mike Tomlin said after the game that that was the play call when asked if Roethlisberger checked to it.

Brown’s second touchdown reception of the game, a 26-yard bomb from Roethlisberger with 7:01 left in the third quarter, also came against Breeland, who once again had no deep safety help. The pass was delivered perfectly by Roethlisberger and was Brown’s 500th career catch from the Steelers quarterback.