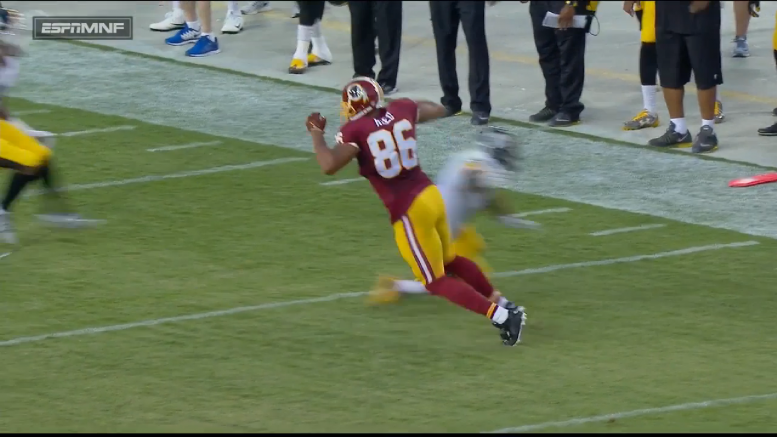 Now that defensive tackle Steve McLendon is no longer in town, it’s pretty evident that Pittsburgh Steelers linebacker Lawrence Timmons is the most polarizing starter on the defensive side of the football when it comes to the fan base.

While Timmons is certainly no longer the player he was a few years ago now that he has hit the ripe old age of 30, the amount of criticism that he’s currently receiving for his play after the Steelers first two games from some certainly seems to be non-objective.

StarSpangledSteeler wrote recently in the comments:

We are paying Lawrence Timmons $8 million this year ($15 million cap hit) to play 60% of the snaps. I don’t care how solid he has been over the years or how much of a team leader he is, that is a terrible use of cap space. He has looked extremely slow in coverage, and has given up some big plays because of it, and nobody is talking about it.

I asked StarSpangledSteeler to point out the big plays that Timmons has given up so far this season in his opinion and he obliged. So with that, let us take a look at each of them and him accusing me of not pointing out the bad plays that I thought he had.

The slow in coverage comment made by StarSpangledSteeler is way off the mark as this was a zone drop by Timmons, something the Steelers do a lot of with him. StarSpangledSteeler then states that Timmons whiffed on the tackle and I don’t think anyone will argue with him when it comes that part of his analysis.

Did I get on Timmons publicly for this? I will let you decide by reading the tweet below that I posted during the game.

Another zone drop here by Timmons, who then has to account for Redskins wide receiver DeSean Jackson crossing in front of him. So, how does this happen? The Redskins ran two vertical routes on the left side and safety Robert Golden carried one of them which left the defense with no flat defender on that side and it opened up Jackson on a crosser at the numbers.

In case you missed it, here’s what Jon Gruden said right after that play was over:

“There’s a lot of different coverages that you can play but you don’t want Lawrence Timmons covering DeSean Jackson on anything. Blown coverage by the Steelers.”

I agree, Jon, and it’s silly to think or expect the Steelers would design any coverage that includes Timmons having to cover Jackson.

My public thoughts on this during the game? See the tweet below.

Timmons covering Jackson? No thanks #Steelers

No tackle? Yes, no tackle.

Slow to disengage and then slow in pursuit, wrote StarSpangledSteeler.

Timmons has to stay in his gap and if rookie safety Sean Davis, a favorite of StarSpangledSteeler’s, makes this tackle, then Timmons doesn’t have to track the running back down. This REALLY appears to be biased analysis by StarSpangledSteeler, in my honest opinion.

A TON of missed tackles on this throw to the tight end with Timmons indeed being one of them. I say bench all of them and that includes Davis and linebacker L.J. Fort, who both missed the initial tackle attempt.

Ah, StarSpangledSteeler has got me here and without a doubt this was Timmons’ worst play of the first two games of the season and it resulted in a touchdown nonetheless. Did I call Timmons out publicly for this? You bet I did.

Looks to me like Timmons did enough on this play. Does Golden get a missed tackle as well on this 2-yard gain?

Curiously enough, I broke this explosive play down in a recent video which StarSpangledSteeler obviously didn’t watch. The offensive lineman certainly has a head of steam and Timmons chooses to go over the top of him instead of underneath him in order to make sure he forces the running back inside, just as Davis did. If Timmons tries to go underneath, the running back might very well have gone for even more yardage than he actually did.

I can only imagine what StarSpangledSteeler thinks about Stephon Tuitt and William Gay on this play that Timmons got credited the tackle.

Bang-bang play off of play action and I really don’t see the issue here. Seems a bit nit-picky to me by someone who obviously is biased against Timmons.

“He has looked extremely slow in coverage, and has given up some big plays because of it, and nobody is talking about it.”

Yes, Timmons has been far from perfect in the Steelers first two games of the 2016 regular season, but with that said, he certainly has made more positive plays than negative ones as evidenced in the successful tackle post I did Thursday evening.

It’s not Timmons’ fault that he makes $8 million this year and as far as his playing time being reduced this season, which very well could wind up being his last in Pittsburgh, I’m pretty sure that we all could see that coming late last season. We wrote and talked about that quite a bit as it relates to how the Steelers were likely to play more dime personnel groupings this season and it certainly makes sense to do so in today’s NFL. With that said, while Timmons is no longer the three-down linebacker he once was early in his career, he’s still a more than adequate two-down linebacker who is capable of playing not only in the Steelers base defense, but their nickel as well.

The Steelers still have a lot of games left in the 2016 season and for all we know, Timmons might just blow a few tires along the way. With that said, he certainly hasn’t played as awful as StarSpangledSteeler would like you to believe in the first two weeks of the season.

I will leave you with this from StarSpangledSteeler:

A lot of people are quick to criticize our rookie (Davis) for his missed tackles, and that’s fine, I admit he has had some ugly whiffs. But Timmons has whiffed MULTIPLE times per game as well this year and I’m hearing crickets from you on that. At least be fair to both players. That’s all i ask.

I think you will all agree that when it comes to me and my objectivity related to Timmons that there certainly haven’t been any crickets in my corner.

… And let’s end with this just so you know why and how this post came about:

Why don’t you post a new thread with the 9 clips of the 9 Timmons plays I cited and see what Steeler Nation has to say? We’ll let the fans decide.

Ok, StarSpangledSteeler asked that I post all of this for you to see and now it is your turn to chime in on how good or bad you think Timmons has played so far this season. This should be fun and I’m off to make some popcorn.