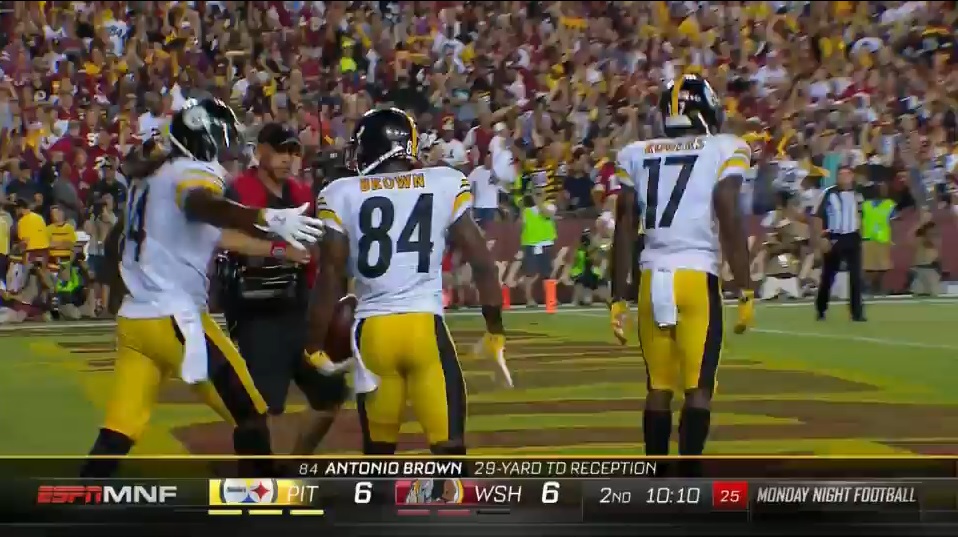 Here is one stat from the Pittsburgh Steelers’ Monday night victory over Washington that you might find surprising—I know I did. Throughout the length of the contest, on 37 pass attempts, quarterback Ben Roethlisberger only completed a pass to five different targets. In fact, he only targeted those five players throughout the game.

The pass-catchers: the starting running back, the starting tight end, and the top three wide receivers. That’s it. Shockingly, Antonio Brown led all Pittsburgh players with 11 targets, catching eight of them. Eli Rogers was targeted seven times, catching six of them, and Sammie Coates caught two of three targets.

Tight end Jesse James caught five passes on seven targets, while running back DeAngelo Williams caught six of nine targets. That all amounted to a 27-for-37 day for Roethlisberger, whose actually accuracy is belied by those numbers, as there were a couple of drops and instances of players not being on the same page factored in. Yet he still completed 73 percent of his passes.

A typical Steelers game in recent years, however, has generally featured more than five players catching passes, sometimes substantially more, in the territory or nine or even 10 players catching at least one pass, or at least receiving a target.

Among those who participated in the game without receiving a target in the passing game are running backs Fitzgerald Toussaint and Daryl Richardson (who did indeed play), wide receiver Darrius Heyward-Bey, and tight ends David Johnson and Xavier Grimble, who played more than I anticipated that he would.

No doubt part of the reason for the low number of different targets had much to do with the fact that there were so many new pieces involved. It’s no surprise that Brown and Williams accounted for 54 percent of Roethlisberger’s pass attempts during the game.

Heyward-Bey only saw a small handful of snaps during the game, with the Steelers giving both Coates and Rogers a long burn, each seeing roughly 45 snaps apiece, so his absence from the stat sheet is not exactly a shock either.

Williams dominated the snap count from the tailback position, with Toussaint and Richardson seeing less than 10 combined, if memory serves, and there were a couple of instances in which the Steelers ran with four wide receivers and a tight end.

Johnson was never much of a pass-catcher and is for many intents and purposes a new face in this offense again, while Roethlisberger has never played with Grimble before. When you factor all of these new faces in, it stands to reason that he consistently targeted the players and positions that he anticipated would be available, as also indicated by James’ seven targets.

There may be a couple of new potential targets added back to the fold next week with Markus Wheaton and fullback Roosevelt Nix working their way back from injuries. Wheaton would obviously see his share of targets, and I do have an inkling that Nix will be used in the passing game every so often as well.