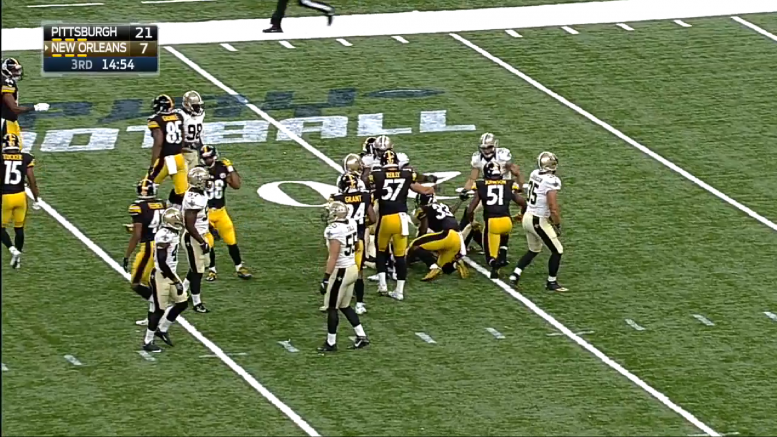 Getting near the end. My 53 man roster predictions for the Pittsburgh Steelers. This is the “settled in” version, after the team places Le’Veon Bell on the suspended list and Senquez Golson on injured reserve.

If you want to look back at my last roster prediction, click here.

Analysis: I wrote a really creative paragraph on the team’s search for a #3 QB. Then they signed Mettenberger. I hate him already.

Analysis: This group is pretty much locked in. The biggest question is who is voted off the island when Bell returns, Toussaint or Richardson.

Analysis: Not much needed. Nix went from longshot a year ago to bonafide lock.

Analysis: Ladarius Green has officially been placed on Reserve/PUP, opening up an obvious path for a third tight end. There will be some blockers on the market but Grimble was shown enough progression the last two games to give the nod as the #3. But his spot is very tenuous and how he plays against Carolina is critical.

Analysis: Locked and loaded. Just a question of the workload these players, sans AB, will receive on a game-to-game basis. That’s really tough to predict.

Analysis: No more Jerald Hawkins. But there isn’t another tackle on this roster worth carrying. Heck, there are barely any left.

Analysis: Hawkins’ injury solves the debate for the team. Hubbard and Finney make the team with Hubbard’s versatility earning him a hat on gameday.

Analysis: Unchanged from Week One.

Analysis: Ditto with the outside linebackers. This position has been set for several weeks.

Analysis: Whew, this is the toughest call of the whole thing. Fort feels like a lock to make the team, showing well on defense, special teams, and consistently running ahead of Matakevich and Steven Johnson.

And yup, I’m doing it. It’s happening. Matakevich on, Johnson off. No, it’s not because I think Matakevich is this can’t-miss prospect or someone who will be claimed by 31 other teams, the prettiest girl in school every boy falls over (I’ll admit I’m a sucker for redheads).

Looking closely at last weeks’ game, going through my notes, Matakevich ran ahead of Johnson on first team kick and punt coverage. Johnson is not running on any unit “ahead” of Matakevich. And that’s the best sign I can come up with for the rookie’s chances.

Could the team keep 11 linebackers, including Johnson? Not impossible, as unusual as it would be. But for now, it’s just ten, and that includes Dirty Red.

Analysis: First four are pretty set. I didn’t want to get too crazy down the rabbit hole with calling my shots on waiver wire targets but Roberts made the most sense of all the players I looked at and talking to Patriots’ fans, seems unlikely to make the final 53.

The only issue is a lack of slot-capable players but Sean Davis will start and if needed, Gay will be forced to move inside. If the team isn’t comfortable with Burns in the moment, Grant can play RCB.

Analysis: Dangerfield climbs back onto the roster because of Thomas’ injury. If Shark is healthy and ready to go Week One, I’d consider bumping Dangerfield off and putting someone like Johnson onto the 53.

Analysis: The Wizard of Boz. Dig the nickname.

Analysis: Berry needs a cool nickname too. Get to work, The Internet.

Analysis: Warren is too old for a nickname. Sorry, Greg.

Neither played in the tune-up game against the Saints. So I still keep Brown-Dukes ahead of Cameron Stingily, who will ‘duke’ – *ba dum tish* – it out for the final running back spot. Sure helps create some intense competition.

Analysis: Ayers is back on the list after Issac Blakeney was released. He is a good foil to Hamilton, who has shown to be a vertical threat to Ayers’ shifty, underneath ability.

Analysis: He offers nice size, guard/tackle versatility, and I like his demeanor as a run blocker. In a group where so many around him have gotten injured and shown the door, Feiler remains. It’s like that episode of Recess where T.J. and the gang are the only people in the entire school who didn’t get sick at lunch.

Analysis: Both offer prototypical size for the position and have flashed enough. Maxey has deep sleeper potential. Steelers go pretty deep here by keeping two ends and a nose tackle. But Hooks has impressed enough and will function as the third nose tackle. Need someone for scout team.

Analysis: Feeney has played reasonably well in his return. All the draft picks make it.

Analysis: Happy to be able to keep both guys on the roster. Felt more compelled to since the team doesn’t have another slot corner on the 53, giving Garner a boost. I am interested in Shabazz’s long-term value. If the team wants to upgrade long-term at corner, they need to make noticeable investments. So both stick around.