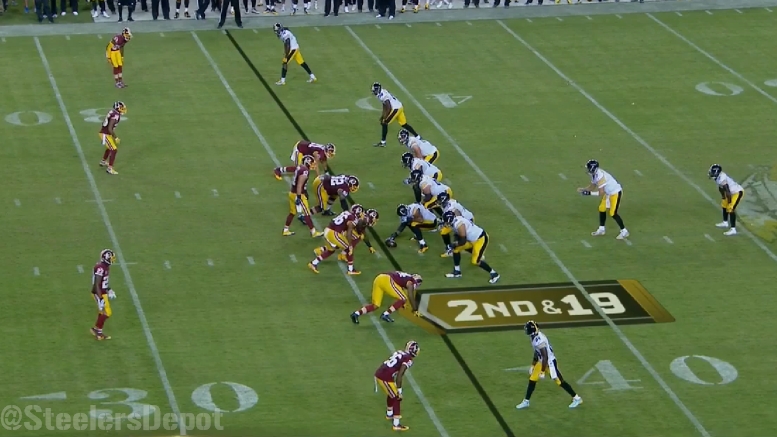 Question: Will we see the Steelers use more four-receiver sets tomorrow than in the season opener?

Under the watchful eye of offensive coordinator Todd Haley, the Steelers have not made frequent use of four-receiver sets over the past few years—although with an offense that boasts talented pass-catchers from the running back and tight end positions, that often is not as necessary as it might otherwise be.

In fact, Pittsburgh barely used it at all last season until the injuries at the running back position mounted, and they ran several plays late in the season out of the 01 personnel—four wide receivers and a tight end.

The Steelers ran two plays out of this look, with the predictable personnel: tight end Jesse James and all the healthy wide receivers on the roster. it should be noted that, unlike last season, the team actually found success on these plays, producing gains of six yards on third-and-four and 21 yards and second-and-19.

The recipients of those passes were James and Antonio Brown, respectively, with Sammie Coates having served for most of the night as the team’s second wide receiver, seeing five of their 11 snaps out of the 12 personnel package, with Eli Rogers getting one, and Darrius Heyward-Bey getting the other.

With the offense proving the proof of concept that they can be effective using the 01 or 10 personnel with four receivers on the field, and given the situation without Le’Veon Bell and Ladarius Green, they could be emboldened to use it more tomorrow.

The potential return of Markus Wheaton would certainly make it all the more likely that they dabble even further in the four-receiver sets than they did in the opener. He is, at least in theory, one of their top two wide receivers, so they will want to get him on the field, although he finished out the week of practice as limited.