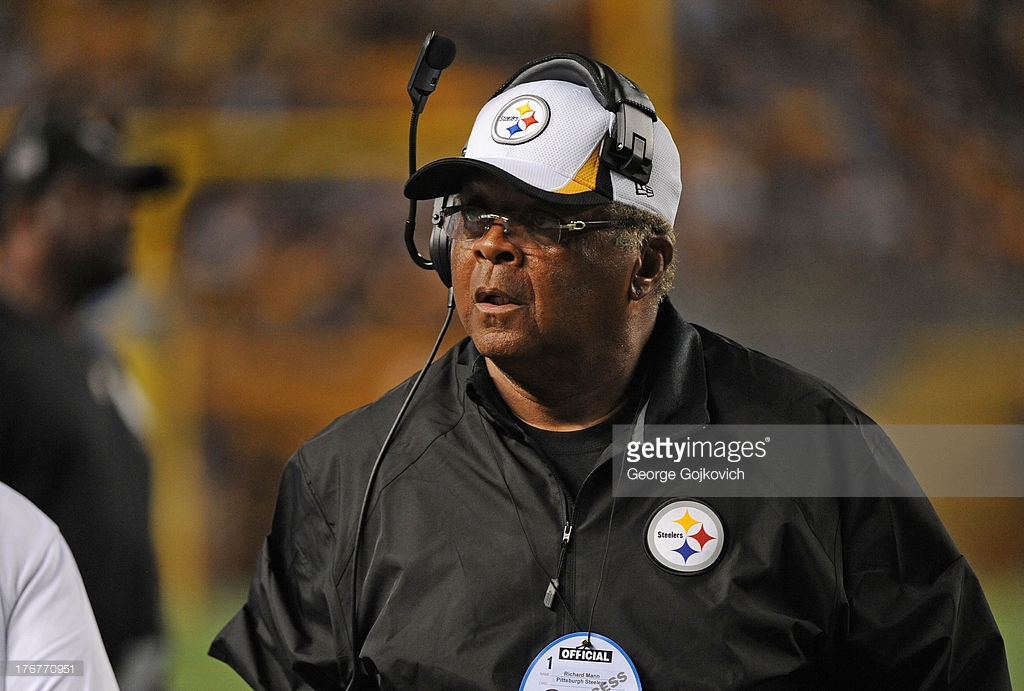 I don’t know about you, but I was pretty ecstatic when the Pittsburgh Steelers hired Richard Mann to be their wide receivers coach to replace Scottie Montgomery back in 2013. With Mann, a native of Aliquippa, Pa., now entering his fourth year with the Steelers and his 32nd season as an assistant coach in the NFL, and pushing 70 years of age, you have to wonder if 2016 might ultimately wind up being his last year.

“I’m at the end,” Mann admitted Wednesday during an interview that was aired on Steelers Nation Radio. “I was going to shut it down this year and I had to take a little sabbatical for about a month and a half, two months. Got it right and I’m back. You know, I’m at the end.”

Mann reportedly had to take a sabbatical during the offseason due to him needing to have a medical procedure, but even though he might not have been on the field coaching, he was reportedly watching spring practices from an overlook of the UPMC Rooney Sports Complex, according to Chris Bradford of the Beaver County Times in a story that he wrote about the Steelers wide receivers coach this past June.

“If we have a question, he’s right up there and we run over and talk to him,” said veteran receiver Darrius Heyward-Bey in June. “He sees it all. It’s amazing from up there, he’s staying in tuned. He knows what’s going on.”

Mann has been knowing what’s going on with his wide receivers since 1982 as that’s when he starting his NFL coaching career with the Baltimore Colts. Since then, he has coached wide receivers for the Cleveland Browns, New York Jets, Baltimore Ravens, Kansas City Chiefs, Washington Redskins, and Tampa Bay Buccaneers before taking three years off prior to him being hired by the Steelers. Over the course of those many years, Mann has coached some great wide receivers as Antonio Bryant, Joey Galloway, Keenan McCardell, Rob Moore, and Webster Slaughter are just a few past pupils of his.

Since arriving in Pittsburgh in 2013, Mann’s latest prodigy, Steelers wide receiver Antonio Brown has averaged 125 receptions and 1,677 receiving yards and he figures to top those averages in 2016. While Mann probably shouldn’t get all of the credit for Brown’s accession to becoming the league’s best wide receiver, he certainly deserves some of it.

So how much pride does Mann personally take in seeing players such as Brown rise up to become one of the best in the league?

“To me, you know we coach whoever we get,” said Mann. “I coach everybody in the room from the top guy, Tonio, to the bottom of the list. Whoever we got, off the streets, the free agents, we coach everybody. So I just found out over the years you need to coach them all, so when somebody goes down you ain’t got to start all over. So we coach everybody in the room and I think as a coach, you take pride in seeing if you coaching them and they do well, that’s when you get your little kudos from this, is when they do well, it makes you feel good.”

If indeed 2016 winds up being Mann’s last season with the Steelers, and the last of his long coaching career, it would be really great to see him go out on top as a Super Bowl champion.

He’s good alright and he’ll certainly be tough to replace whenever his coaching career in Pittsburgh finally comes to an end.