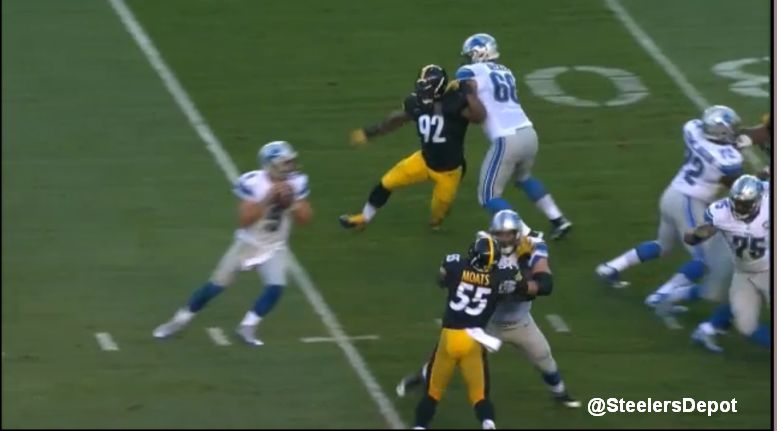 My game notes from the Pittsburgh Steelers preseason debut against the Detroit Lions.

– Jesse James and Roosevelt Nix dished out some vicious blocks on the opening return.

– Punt coverage team: On the line: Williams-Moats-Greg Warren-James-Chickillo. Nix and Jordan Dangerfield flanked as the wings while Robert Golden maintained his spot as the team’s upback, the quarterback of that unit. 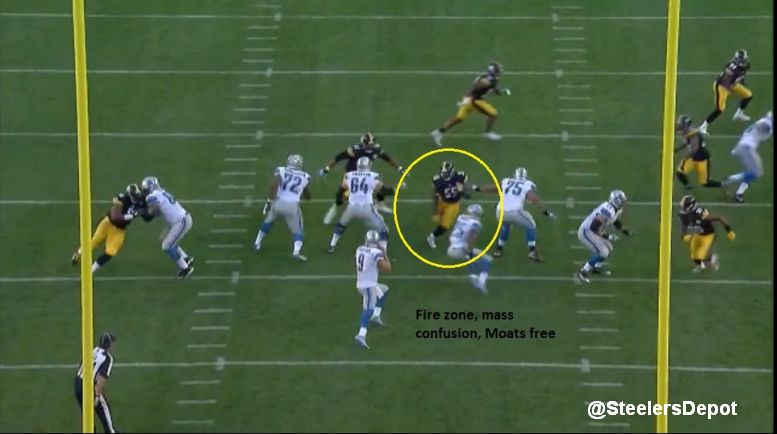 – Like the job Ryan Shazier did to take on the pulling guard. Stays square, gets low, sheds, makes the tackle. 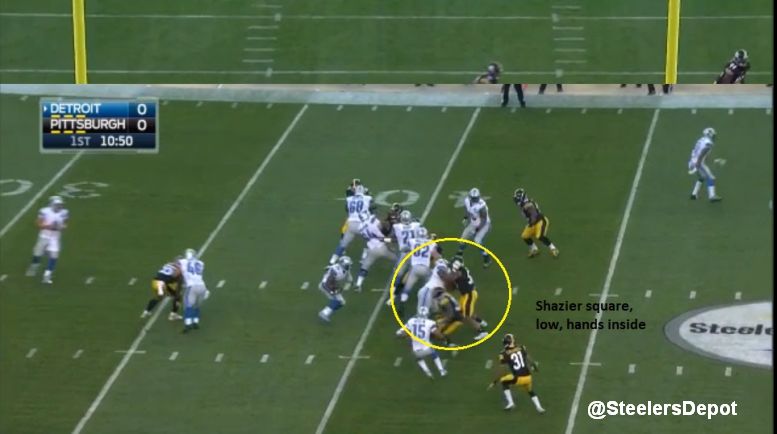 – Another look at Sean Davis being welcomed to the NFL by Anquan Boldin.

– Looks like Anthony Chickillo lost the edge and let the back bounce it to the left. Little hard to tell here unfortunately. No Coaches’ Tape available.

– James Harrison still has it. Dips under rookie Taylor Decker for the sack/forced fumble.

– With Maurkice Pouncey back, the Steelers have put their pin/pull schemes back into the playbook. It’s Cody Wallace pulling here but hopefully we see it with #53 today.

– Not a play many will talk about but this is a nice turn out of his bail tech, close, and finish by Doran Grant.

– Punt coverage unit: the team had only ten men on the field. Ray Vinopal-LJ Fort-Anthony Chickillo-Vince Williams-Steven Johnson-Roosevelt Nix. Doran Grant/Sammie Coates the jammers to one side, Tucker to the other, by himself and probably missing his dancing partner.

– Bad read by Landry Jones and arguably his worst play of the day. Should’ve thrown the flat instead of hitting the tight end blanketed by the linebacker. Had the linebacker expanded to the flat then yeah, hit James. Incomplete. 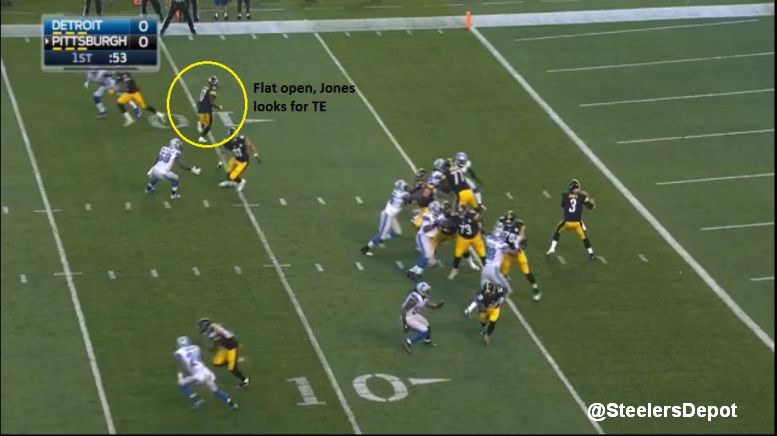 – As Matthew Marczi recently showed, L.T. Walton with a strong play, holding the POA and shedding, preventing any chance of a big gain.

– Just to reiterate, kudos to Ricardo Mathews for generating the pressure on Grant’s pick six but the left guard really had no clue what was going on and Mathews had a free path.

– Strong alley fill by Shamarko Thomas here against the run. Comes up and makes the tackle. 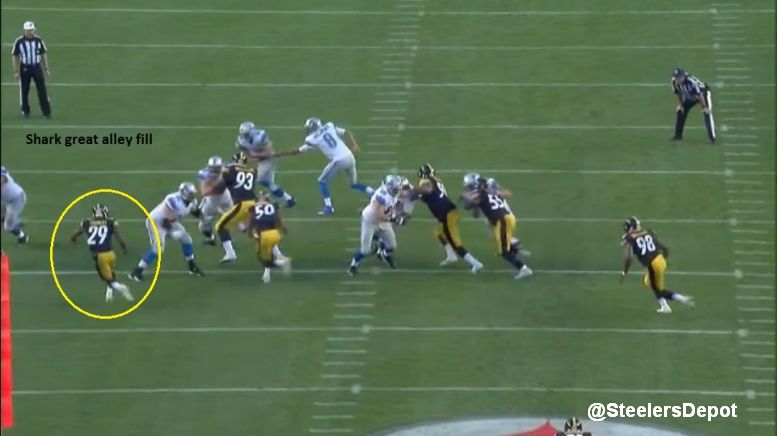 – Davis breaks down too early and winds up trailing on the tackle, despite having the angle and the sideline to his advantage.

– Caushaud Lyons physical against the run, brushing off the right tackle and forcing the football inside.

– Javon Hargrave already showing some veteran tricks, pulling the right guard’s arm as he works away on his stunt, pulling the guard forward so he can’t pick up Mathews. 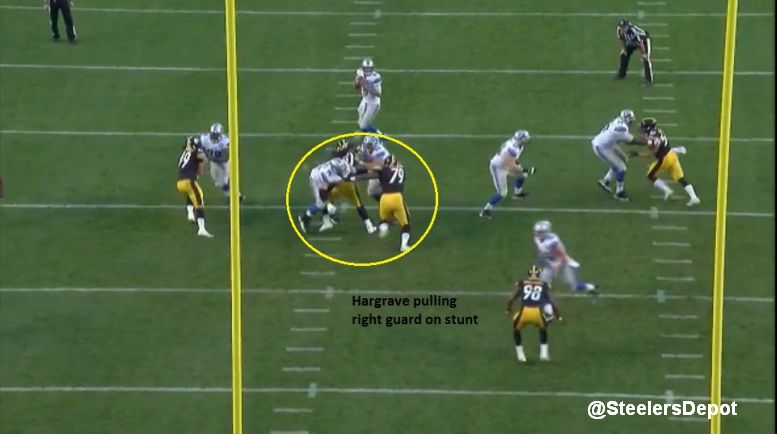 – Ryan Harris…not much better than Alejandro Villanueva. Watch him at left tackle. He’d then whiff on his run block the next play.

– Key blocks on the right side here. Finney with a strong reach block, Hawkins works to the second level, and though Johnson maybe gets away with a hold, he seals his man.

– Clean pocket for Jones on his TD to Darrius Heyward-Bey. Allows him to step up and make a big-time throw. 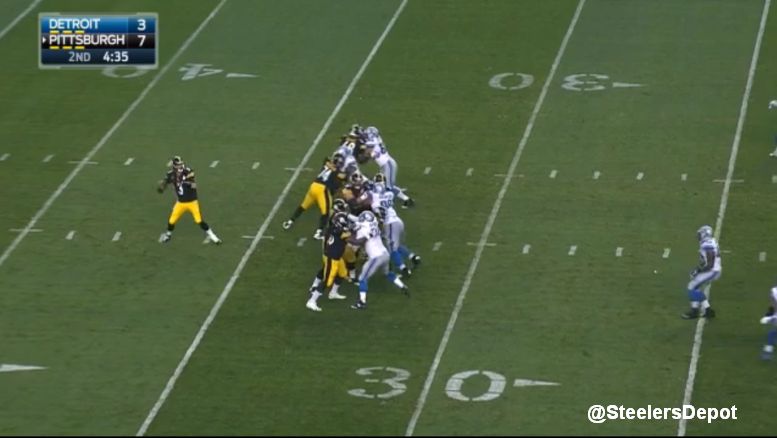 – Not sure what was going through Shark’s head here. Has Grant on the outside but he still bits on the back’s juke, opening a lane inside and a lot of extra yards. 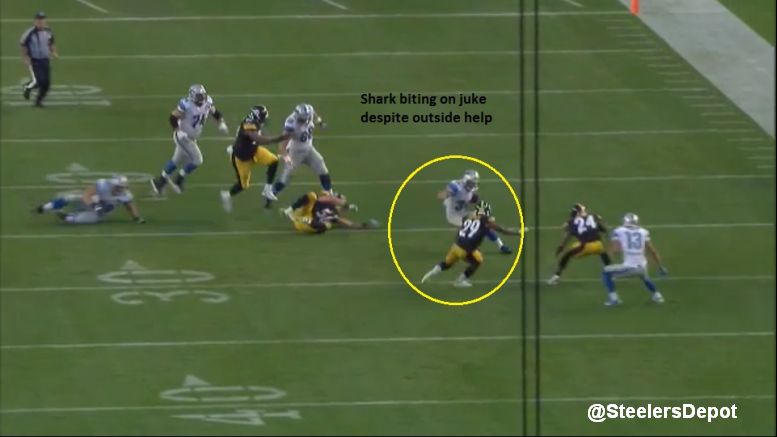 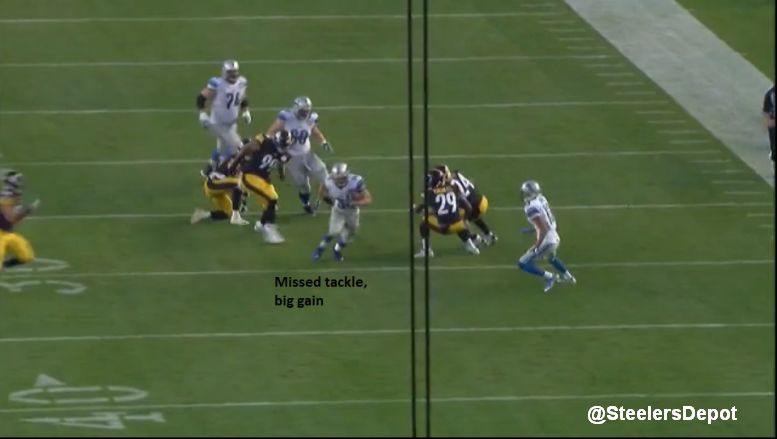 – You can see Coates turn his eyes downfield before securing the catch, leading the ball to pop up into the air. 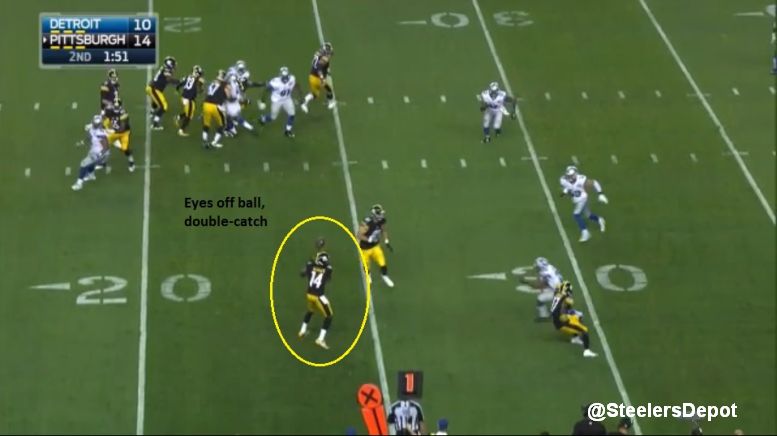 – One thing for Rogers to work on. Realize this isn’t the college game. Thinks the play is over once the Lions’ player recovers Coates’ fumble.

– Mathews spills this run, forcing the back laterally. Build a fence around the tackle box. More the back has to run around it, the more time there is for help to get there. 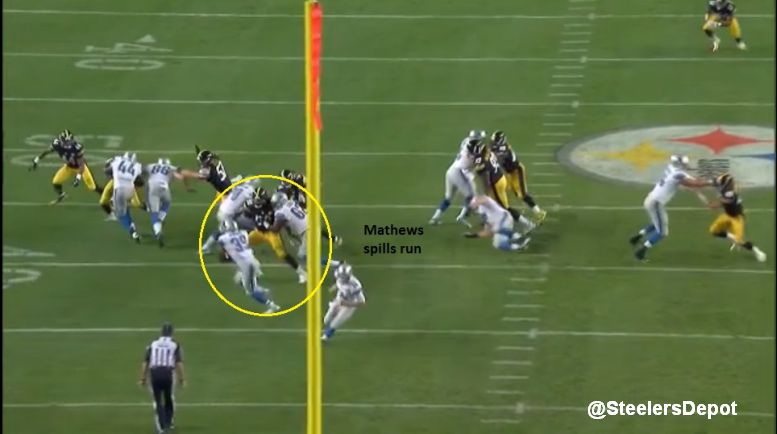 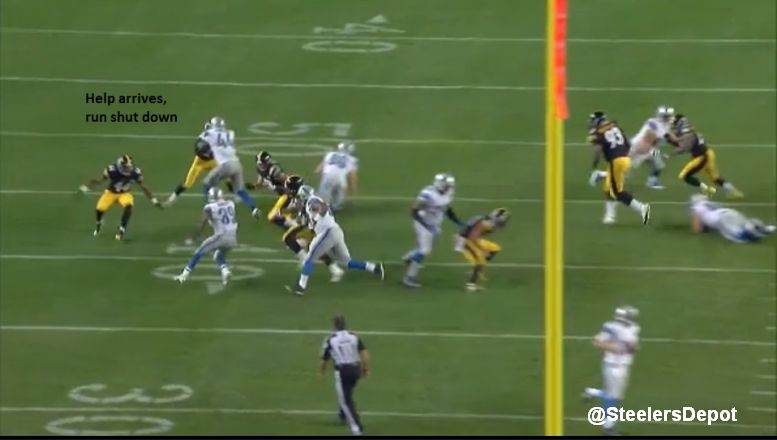 – Hawkins got beat bad here. Nearly turned into a safety. 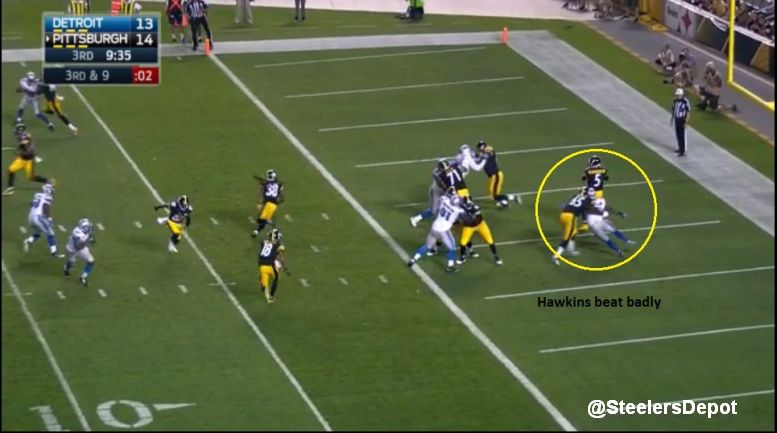 Strong double-team by Brian Mihalik and B.J. Finney on the three tech. Gotta get movement on the first level defender before one leaves to the second level. Nasty finish by Jesse James and I liked Demarcus Ayers’ effort too. 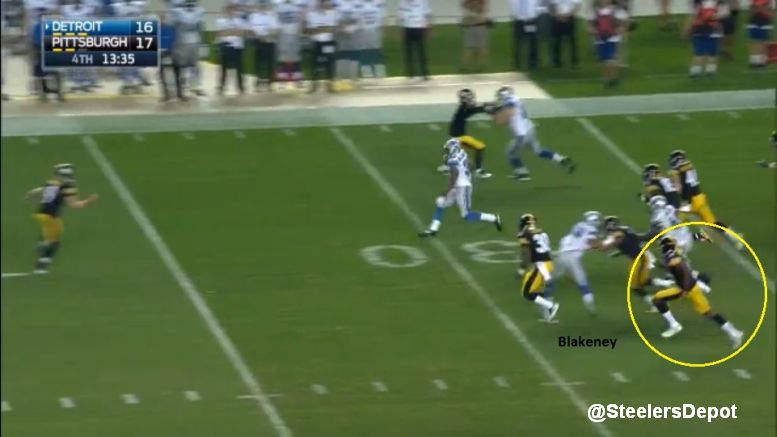 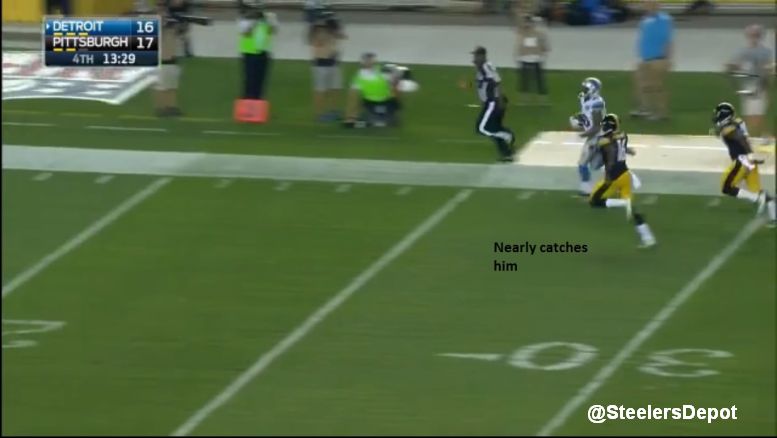 – Breakdown on the play. Ray Vinopal got sealed inside and basically into Grimble’s gap. KevinWhite jumped outside, kicked out, and it created the lane. 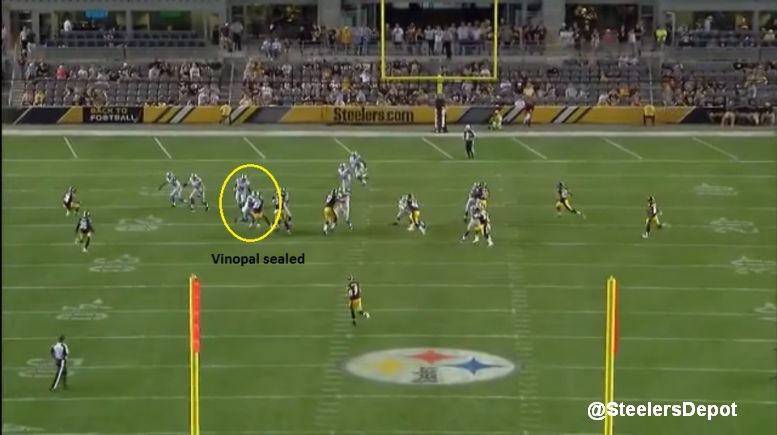 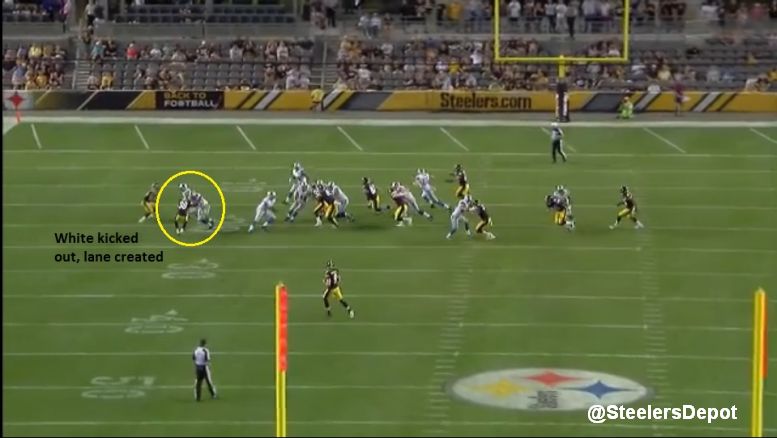 – Two things to watch in this GIF. Giorgio Newberry fooled by the pass set of the tackle and has no idea this is a run. Matakevich is slow to scrape over and fill the run, letting the back past.

– Mike Reilly…just a little bit out of the play. 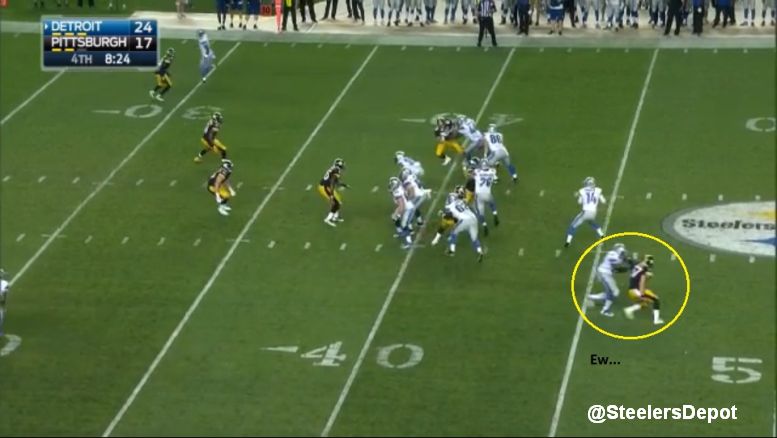 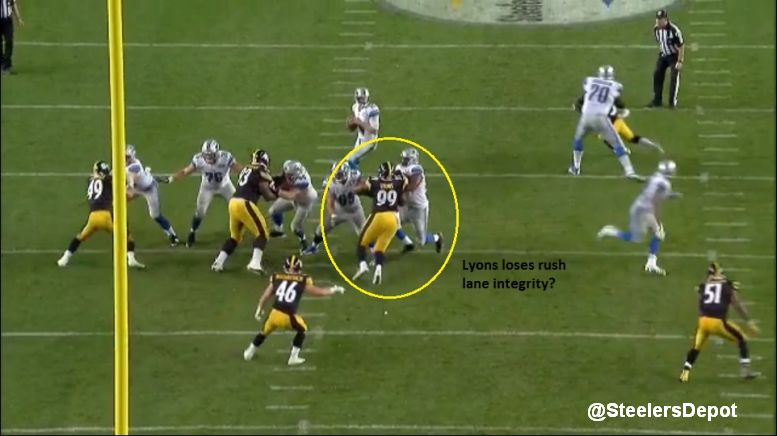 – Do give credit to Lyons for his chase to the ball to force a fumble late in the game, though the back recovered it.

– The Lions scored on this play… 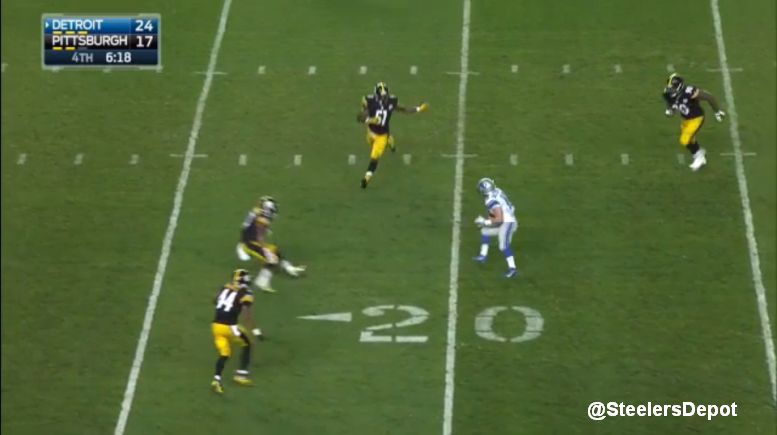 – Demarcus Ayers not square to the football on his lone punt, slowing his momentum to get upfield. 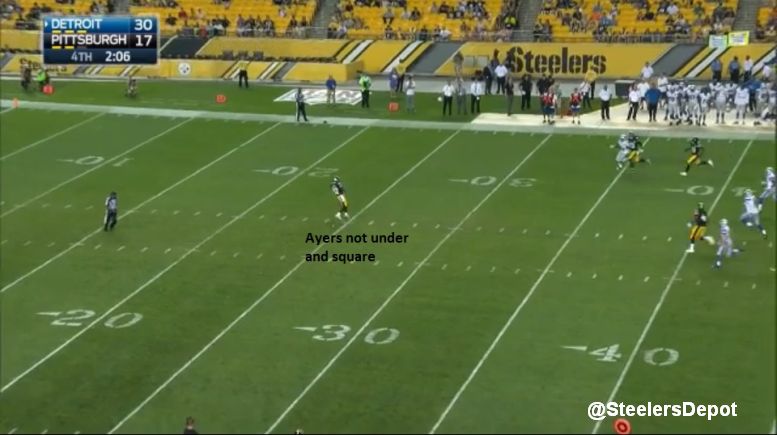