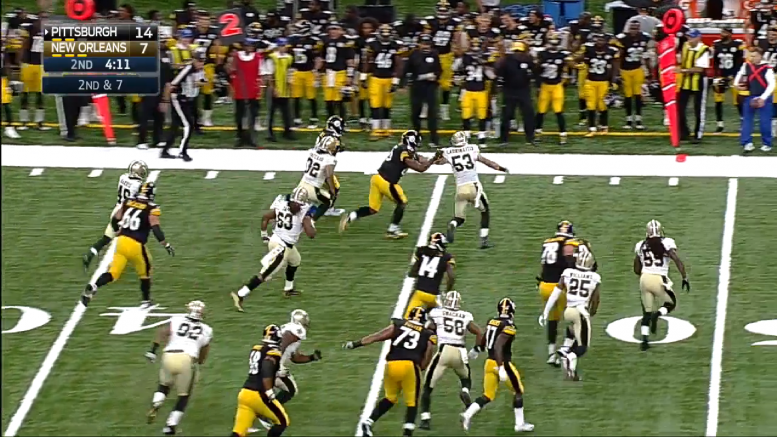 The regular season is less than two weeks ago, and as might be expected, there is very little left to be decided for the Pittsburgh Steelers, or for any team, when it comes to assembling their 53-man roster. nearly all of the roster spots for most teams, upwards of 45 or even 50, are already more or less determined, and whittling down the roster is largely a formality.

For the Steelers, however, there are still a couple of areas of intrigue, and one of them is the case of first-year tight end Xavier Grimble, and whether he is able to show enough to make the 53-man roster after spending all of last season on the Steelers’ practice squad—and bouncing around in 2014 after originally joining the league as an undrafted free agent.

It is with that in mind that I watched Grimble against the Saints, during which he saw 33 snaps’ worth of work, including the opening snap in which he was one of three tight ends on the field—including the h-back—though the rest of the first two drives until the final snap saw the offense run out of the 11 personnel.

While Jesse James got the first series, however, Grimble ran with the first-team offense for the second drive, albeit a four-play drive, and I did see some things to my liking. I thought he did a nice job, for example, of clearing out the middle of the field to allow an easy reception for Eli Rogers on the second play of that drive.

late in the first half, he also showed off the athleticism that has often been talked about in sweeping around the left edge to lead block for Le’Veon Bell for a nice gain. This was not the first such block he has made during the preseason.

That set up a third and one, and it was on that next play that Grimble got free, slipping inside the safety for a 22-yard gain, 10 of which came after the catch. He provided a nice seal on a run off left tackle two plays later, as well, though that play went nowhere.

He did have some troubles when he was asked to work one-on-one against an edge rusher in the second half. On back-to-back plays, he allowed the rusher to win the edge and get a hit on the quarterback on a 58-yard throw, and then was flagged for a holding penalty.

Still, a couple of plays later, he caught a pass for four yards, and then another on a screen play for 11 yards, but the latter was negated by penalty, with an ineligible lineman blocking downfield.

I do see the potential there in Grimble, though the consistency is lacking; the same could be said of James. Grimble did get his special teams work in during the second half. He will have to win his roster spot with a quality game on both offense and special teams, however, in the preseason finale.