New development in what has quickly become quite the saga between Pittsburgh Steelers linebacker James Harrison, the union, and the Roger Goodell. USA Today’s Tom Pelissero has been all over this story while ESPN’s Chris Mortensen was the first to report today’s initial update.

According to Mort, Harrison and the rest of the players asked to cooperate have accepted the league’s request to talk to the NFL as part of their investigation into the PED allegations from Al-Jazeera’s initial report several months ago.

After much back and forth over the summer, the league issued an ultimatum: interview in good faith by August 25th or be suspended.

Harrison, per Mortensen’s ESPN article, will talk to the league on August 29th, four days after the deadline. An excerpt from his report.

“[Harrison] has set forth conditions limiting questions to only the segment cited in the Al-Jazeera report in which he was identified. It is unknown if the league will accept these conditions but a league official had no immediate comment.”

James Harrison will make himself available at 5 p.m. on Aug. 29 — four days after NFL's stated deadline — according to letter sent to NFL.

It’s unclear if this will be an acceptable compromise to the league or if they will follow through on their decision to suspend Harrison until he talks. Remember, the league has said that even if a player talks after the deadline, the suspension won’t be automatically reversed but reviewed and decided upon by Goodell.

This from the league informing players of their initial suspensions back on Monday.

“The suspension for each such player will begin on Friday, August 26 and will continue until he has fully participated in an interview with league investigators, after which the Commissioner will determine whether and when the suspension should be lifted.”

Mortensen added the league has not provided an immediate response. The scheduled interview dates for the other players is currently unknown.

Albert Breer tweeted a photo of the document sent to the league on behalf of Harrison.

Here is the letter then from union lawyer Heather McPhee to the league on James Harrison … pic.twitter.com/WPB8YsQrZz

UPDATE 2: According to the letter obtained by Breer, it says Harrison will conduct the interview at 3 PM on August 24th. This conflicts with the initial reporting of Harrison interviewing on the 29th, after the deadline. 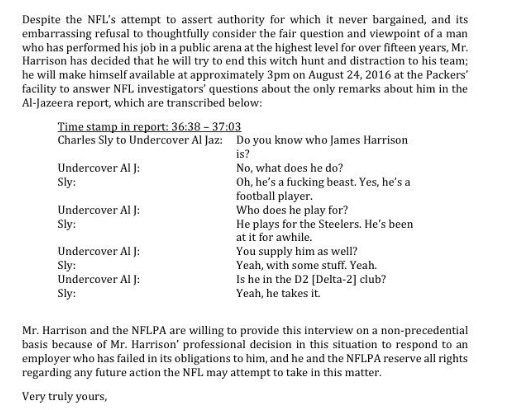 Jason La Canfora now reports the league will meet with Harrison in Pittsburgh on the 28th.

NFL investigators, for instance, will meet with James Harrison on Aug 28 in Pittsburgh at or near the Steelers facility

ESPN’s Jeremy Fowler has jumped into the fray and reports the league has not officially accepted Harrison’s request for a meeting on the 28th. This would be three days after their imposed deadline.

I'm told league, as of this afternoon, had not yet formally accepted James Harrison's request for Aug. 28… https://t.co/UjWx7Jb8om

Pelissero now reports the date is set for August 30th. It is, however, still just a “proposed”interview and yet to be accepted by the league.

Per the NFLPA, the correct time and place of James Harrison's proposed interview is 5 p.m. Tuesday, Aug. 30, at the #Steelers facility.