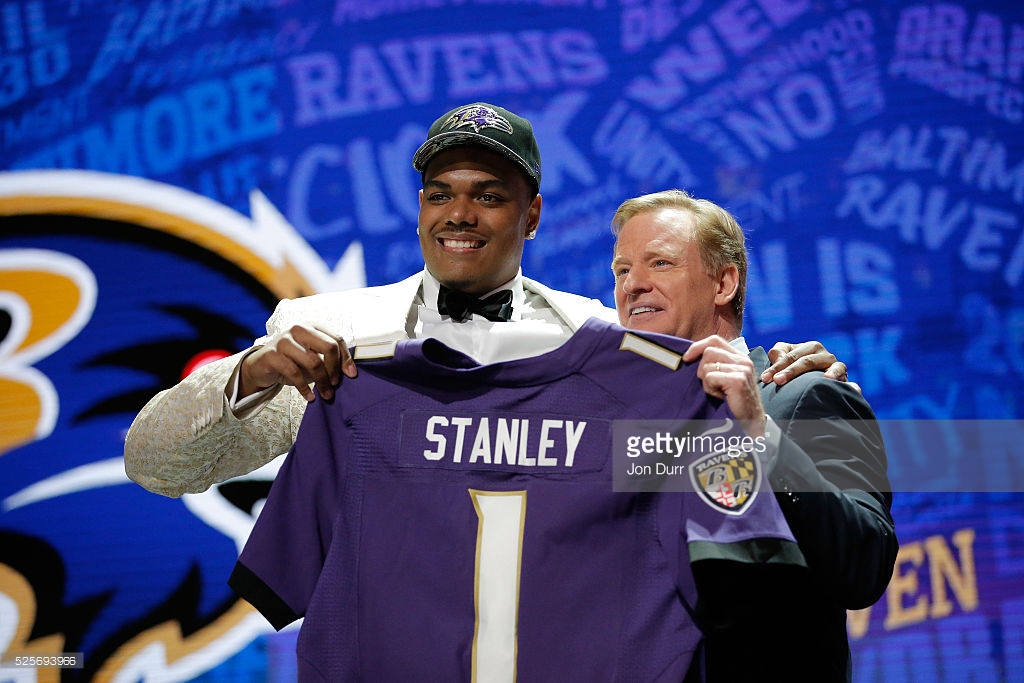 It’s really becoming quite uncanny what has befallen the high draft picks in the AFC North this year. The Bengals’ first-round pick may miss all season, and now with the latest injury to Baltimore Ravens tackle Ronnie Stanley, every first-rounder in the division is at least currently nicked up, including the Steelers’ own cornerback.

The Ravens installed Stanley immediately into the starting lineup at left tackle after the departure of Kelechi Osemele and the release and subsequent retirement of Eugene Monroe, leaving them really with no other sound option to man the blind side of the line for their offense.

A lot is riding on his shoulders, so any minor setback will be magnified, as it was when he walked off the practice field early on Saturday and headed into the locker room. The good news for the Ravens, however, is that it doesn’t appear to be particularly serious, at least according to their head coach.

John Harbaugh told the media after practice that Stanley suffered a soft-tissue injury that is not serious, and Stanley for his part also told reporters after the fact that he is fine. The team believes that he will be ready to go for the Ravens’ preseason opening game on Thursday.

Of course, players are often more confident about their injuries than they have the sense to be. One need only recall Maurkice Pouncey ahead of the Super Bowl in 2010 and how he believed he would be ready to play for that game after suffering an ankle injury, or Le’Veon Bell’s optimism following his 2014 knee injury.

Still, this one does not appear to be overly serious, especially of the team believes that he will be able to participate in a game just a few days, really, after suffering a ‘soft-tissue’ injury, which is certainly about as vague a description of an injury as one can possibly give.

It is interesting to note that instead of James Hurst, who has been the Ravens’ backup for the past couple of years, and, frankly, has been responsible for some of their worst plays, was not the one called upon to step in replace him. Instead, it was rookie fourth-round draft pick Alex Lewis.

The Nebraska product is 6’6” and 315 pounds. Harbaugh praised him after practice, saying that “the nice thing about Alex is that he doesn’t get fazed”, almost suggesting that Hurst does by omitting him from the lineup. “He’s played in a lot of big football games. He stepped in there.

Thus far, it appears as though the Ravens have gotten off the lightest when it comes to dealing with injuries to their first-round draft picks, as the Steelers and Browns are both currently dealing with a banged up cornerback and wide receiver, respectively.

That ignores the fact, however, that they have already lost second-round outside linebacker Kamalei Correa for the season after suffering a broken ankle during a practice last week, having had bodies fall on his leg.