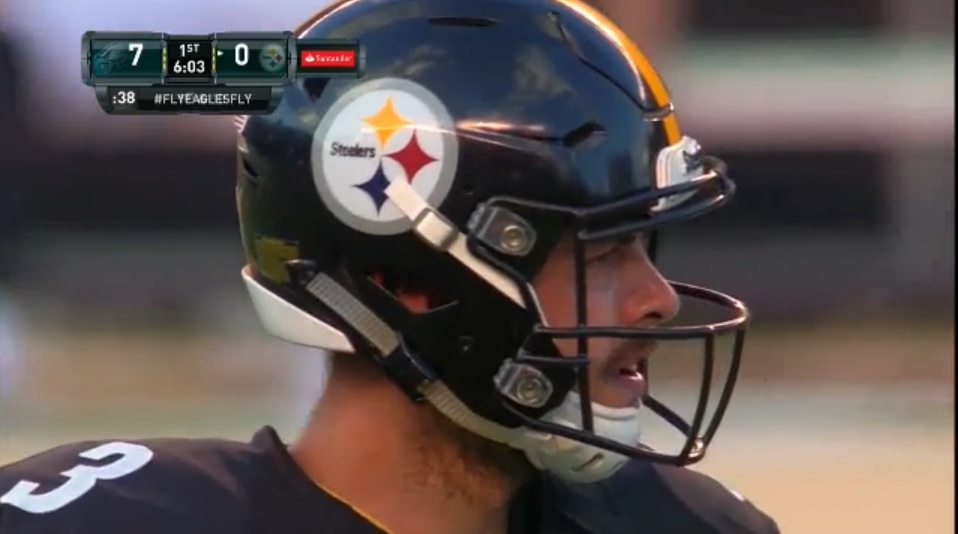 Oh boy. Here I go, wading into a deep end filled with piranhas. And I have a feeling after many fans of the Pittsburgh Steelers read this, they won’t be willing to throw me even a life jacket.

This article isn’t for those squarely in the anti-Landry Jones camp. There’s no changing your mind. Those who won’t be budging. Shift. Move. This is for, to steal the political term in this most appropriate climate, for the undecided. The ones on the fence. Not the ones with the yard signs, bumper sticks, and aggressive Facebook posts.

Obviously, as a disclaimer, this isn’t to state the case that Jones will ever be a franchise player. He isn’t. I’ll pause a moment for the shock to wash over you.

But even after Thursday’s hold-your-nose box score performance, it’s undeniable to recognize he’s made tangible strides as a player. Cut down on the forced throws, internal clock sped way up, and a good-enough arm to deliver the football vertically.

There’s another less tangible element. He’s grown as a leader, plays with a short term memory, and the players around him have his confidence and trust. Heck, he showed those traits in the Eagles game, a contest that has an angry mob ready to pitchfork him out of town.

After throwing his first, and arguably worst, interception, Jones responded with a 14 play drive where he went 5/6 before a fluky, diving interception in the end zone. That is, believe or not, high level stuff. The ability to put behind a terrible decision and immediately bounce back with a lengthy drive with very little error.

And the other two interceptions? There’s a lot more context and nuance than just “Landry Jones is terrible.” The third was caused, in part, to a poor route and fight by Sammie Coates, who wound up taking the blame for his effort. The last was Jesse James getting roasted off the edge. And no, the throw wasn’t going into double coverage. It only looked that way because of how much the ball floated.

Was it going to be complete? Who knows. But double coverage? That’s some narrative. So is the idea he needed to climb the pocket. Tough to navigate a pocket when you have a player from the side and a player barreling into your facemask.

This is what Jones saw a split second after releasing the football. 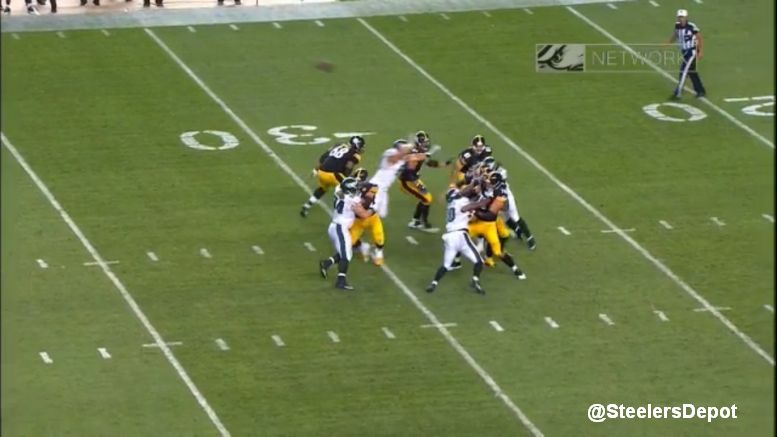 After the game, Jones wasn’t shy about calling out Coates’ performance, challenging him to play to his potential to next week. It’s a similar tactic Ben Roethlisberger pulled with Martavis Bryant, one that worked. Jones dished out some tough love, no doubt. But only leaders who are respected enough to do so take that route.

As much as you might huff, puff, and scoff, there is comfort and trust in Jones. And bringing in anyone else would be starting all over with no guarantee it ever reaches the same point. It certainly didn’t with Mike Vick.

No one is more surprised to be writing this than me. I crushed Jones as recently as last preseason when he looked like a guy who slogged along, robotic in everything he did. But in the regular season, pressed into action as we all covered our eyes, he wasn’t half bad. Not great, not spectacular, but a cool customer who certainly didn’t look like the guy we watched a few months before.

But I came around on him. Not to carry his water but look through as objective a lens as possible. And to destroy a guy for interceptions that clearly had so much context surrounding it is off based and looking through too narrow of a scope.

I mean, what are we crying about? One ugly decision and some unlucky other outcomes?

Another point, cynical view but also the practical one. Even if you, even if the team, wanted to make a switch, their options are just too limited. And to take someone off the street the #2 quarterback isn’t feasible. Too much of a system to learn in a potentially short period of time if Roethlisberger is injured early, as was the case in 2015.

We have our scapegoats. The whipping boys. It was William Gay early in his career, forgetting the context of being put in difficult matchups. It was Antwon Blake last year, flippant of the fact he was playing severely hurt. Nuance forces a more mild, measured approach. It’s tough perspective to keep in the moment of a shutout loss but it’s crucial to avoid this hot-take culture.

Jones has been a preseason lifer. Mike Tomlin has joked he’s played more preseason ball than any quarterback ever. That offers valuable exposure but also plenty of opportunities for mistakes.

We are not looking at a long-term starter. If Jones has to start half the season, there’s trouble brewing in the Burgh. No argument here. But that’s true of almost any backup quarterback situation.

Three days ago, most were content with Jones being Roethlisberger’s understudy. A realization of Jones’ progression and the lack of other options. And while I am willing to eventually change my opinion, I won’t let a singular game with so much information beyond the box score sway me around. Especially one where, as hard as it might be for some to accept, Jones did some legitimately good things.