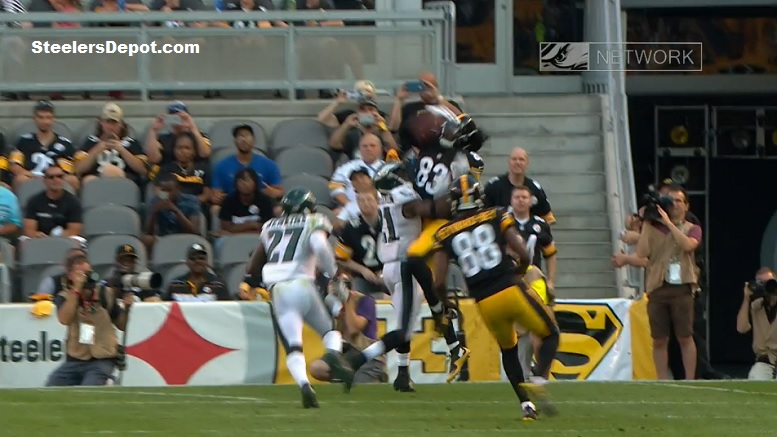 Thursday night’s preseason game against the Philadelphia Eagles is certainly one that Pittsburgh Steelers backup quarterback Landry Jones would surely like to forget as the fourth-year player threw four interceptions in the first half of the team’s 17-0 loss at Heinz Field. While those four interceptions certainly look awful in the NFL gamebook, head coach Mike Tomlin didn’t put the blame of all of them on Jones when he talked about the quarterback’s play during his post-game press conference.

“Like I said earlier, some of it’s good plays by them, some of it’s negligence by us – whether it’s route running or throwing,” Tomlin said of Jones’ four interception night. “I understand that it falls under his stat line, but those are unit plays and sometimes you got to acknowledge that the opponent makes a quality play or two. The bottom line is that us, as a unit, or as a team, have got to do a better job of securing the football.”

Even at halftime, Tomlin wasn’t ready to blame Jones for all four of the interceptions.

Jones’ first interception in Thursday night’s game happened midway through the first quarter and it was probably the quarterback’s worst pick of the game. Against man coverage, Jones forced a pass to wide receiver Sammie Coates and Eagles cornerback Nolan Carroll jumped the route for the interception and returned it for a touchdown. Ill advised read and throw aside, Coates admitted after the game that he should of come back to the football after coming out his break on the route.

“I should’ve came off the ball harder, it was all my fault,” Coates said after the game. “That’s not on the quarterback at all. That’s all my fault.”

Alex Kozora will have a full breakdown of this interception in a forthcoming post.

Jones’ second interception of the game came late in the first quarter with the Steelers offense driving deep in Eagles territory. On this play, Jones attempted to hit wide receiver Cobi Hamilton on a corner route with a high pass over the top of the cornerback. As you can see below, the pass actually hit Hamilton just above the numbers before bouncing up in the air and being picked off by another Eagles defender. Could this ball have been thrown a little deeper? Perhaps, but overall it’s tough to lay a ton of blame on Jones on this one. Like Tomlin said, “Sometimes you got to acknowledge that the opponent makes a quality play or two.”

After the game, Hamilton reportedly said he should have made the catch.

Jones’ third interception of the game came with 2:33 left in the first half and on a 1st and 10 play from the Eagles 20-yard-line. On this pick, Coates runs a post corner route and it looks like he gives up on the route coming out of his post portion of it. Eagles cornerback Aaron Grymes wasn’t fooled at all by Coates’ route and actually ran it better than the Steelers wide receiver did. And on top it all, Grymes made a great catch to record the interception. Coates, by the way, took the blame for this interception after the game was over.

On Jones’ fourth and final interception, the quarterback was attempting to hit wide receiver Eli Rogers when he was hit by Eagles defensive end Steven Means just as he was throwing the football. This resulted in Jones throwing a wounded duck and it was easily intercepted. Means, by the way, blew right past Steelers tight end Jesse James on the play. It’s hard to know what the outcome of the pass might have been had Jones not been hit while delivering the football.

Obviously, you all know by now that I’m not a huge fan of Jones, but with that said, I really think his first of his four interceptions was squarely on his shoulders with the blame of the other three certainly being shared.