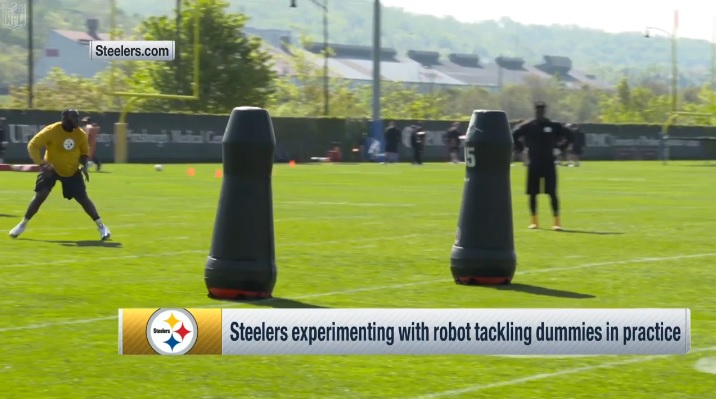 The Pittsburgh Steelers tested out using robots in the spring and apparently, they liked what they saw. ESPN’s Jeremy Fowler is reporting the Steelers, along with two other teams, have placed order for the football robot “MVP” to use in training camp.

Matthew Marczi originally wrote about the team’s use of the “Mobile Virtual Player,” back in May. An excerpt from that article, with quotes sourced from Steelers.com writer Teresa Varley.

As much of a traditionalist and historian of the game that Tomlin can be sometimes, he often has a forward-thinking element about his methods, and the Steelers have not been entirely opposed to incorporating a variety of technology in the past. He was ahead of the curve in adapting to the usage of the two-point conversion as a proactive measure.

He described the MVP as “an awesome piece of technology” and said that he is “always interested in ways to utilize technology in terms of teaching football. We are excited to get a close look at it”.

One element of the tackling dummy that Tomlin appreciated is the fact that there seems to be no shortage of applications for its usage, the numbers of which continued to multiply as the players on the field found out for themselves by the natural processes of practicing. “They show you the applications”, he said.

The Los Angeles Rams and Baltimore Ravens are the two other teams reaching into their piggy bank to buy this new technology.

Each robot comes with an $8,000 price tag and while it sounds like the team is ordering multiple, it’s unclear the exact number of foam dummies that will be uh, running? around St. Vincent College.

Their benefit is obvious. A “player” that never gets tired, never gets hurt, and never needs to be bargained with in the new CBA. But this isn’t to take the place of players on the roster but rather help them. These robots can serve as extra bodies for players to get live reps with, most likely coming in individual work where players can work on their angles and aiming points for tackles.

Still, it’s unclear exactly how these robots will be used. I wouldn’t exactly expect one of them to line up as the nose tackle in 11 on 11. Realistically, these could be used for individual work before or after practice and maybe in some special team drills, a “punt returner” that defenders can actually hit. Perhaps it can also be used in 7 on 7 drills as a “pass rusher” to force the quarterback to move within or flush outside the pocket since the defensive linemen are in their one-on-one drills by that point.

It’ll be interesting to see how the team uses and embraces the technology. And we need to get these robots their own Bumblebee jerseys. Make it happen, Mike Tomlin.