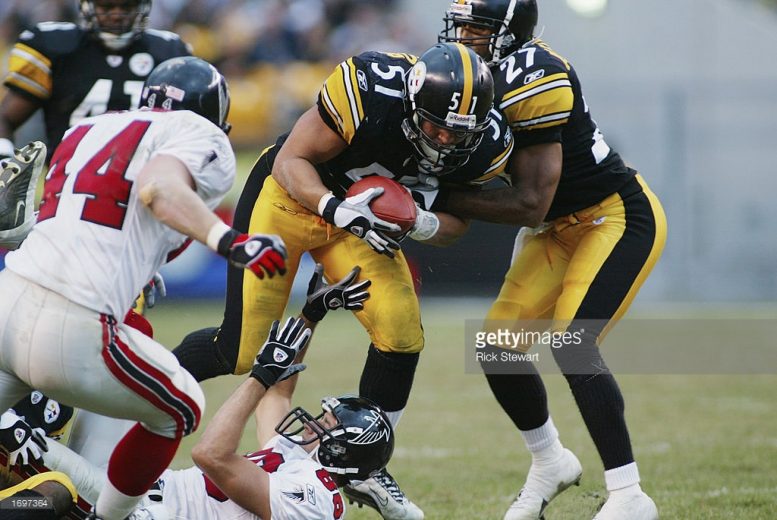 Continuing on with my look back at lucrative contracts signed by Pittsburgh Steelers over the course of the last 15 years, today I will recall for you the signing of linebacker James Farrior back in 2002.

Even though it’s been 14 years now since the Steelers signed Farrior to a free agent contract, it can still probably be viewed as one of the best signings that general manager Kevin Colbert has orchestrated during his time in Pittsburgh.

At the time the deal took place, Farrior, who was originally drafted by the New York Jets with the 8th overall selection in the first round of the 1997 NFL Draft out of Virginia, was 27 years of age and coming off of a season that included him registering 142 total tackles, 2 interceptions and 3 forced fumbles.

The Steelers were able to sign Farrior to a three-year contract with a base value of $5.4 million that included a $1.7 million signing bonus. Farrior, however, stood to earn a total of $7.05 million over the course of the three years as another $1.65 million was available to him in the form of NLTBE (not likely to be earned) incentives that were tied to playing time and league honors. Reports at that time indicated that Farrior could earn $450,000 each season should he play in 85 percent of the team’s defensive snaps and an additional $100,000 per season if he were to receive certain league honors.

While Farrior would ultimately miss two games due to knee and sternum injuries during his first season in Pittsburgh, he still managed to register 82 total tackles in 2002, which was good for third-best on the team that year. Those two games missed would also be his only ones until he missed two more during the 2005 season. In total, Farrior missed just 6 regular season games during his 10 seasons in Pittsburgh. Many of those seasons included him being the captain of the defense and twice he was named to the Pro Bowl (2004, 2008) and once a First Team All-Pro (2004).

Prior to his third season with the Steelers (2004), Farrior was signed to a new five-year contract that had a base value of $16.4 million and in 2008 he signed another five-year contract with a base value of $18.25 million. During his long career in Pittsburgh, Farrior registered 1,078 total tackles, 30 sacks, 8 interceptions and 12 forced fumbles during regular season play.

Below is the basic breakdown of the original deal Farrior signed in 2002.