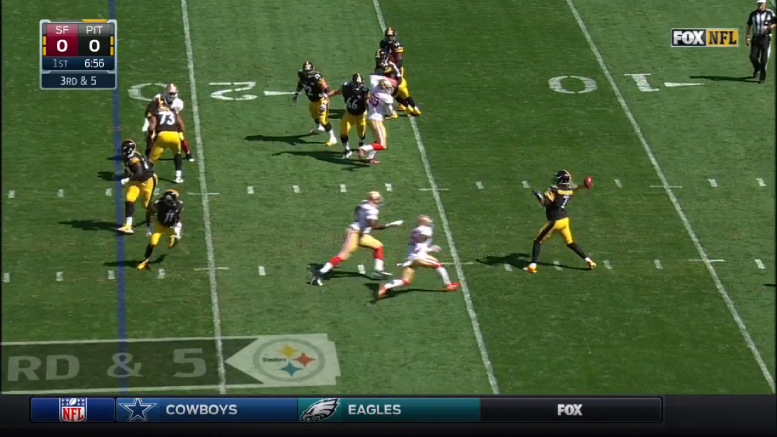 Even though he missed four-plus games to injuries last season, Pittsburgh Steelers quarterback Ben Roethlisberger finished the year as the least-pressured QB in the league, according to stats tracked by Pro Football Reference.

According to PFF, Roethlisberger, was pressured on 27.2% of his dropbacks in 2015. Is this surprising to hear? Not really as according to the same stats that PFF put out last year Roethlisberger was one of the least-pressured QBs in the league following the 2014 season as he was pressured just 27.9% of the time that year.

While the Steelers offensive line should certainly get some credit for being able to keep Roethlisberger’s total pressure percentage down the last few seasons, some credit should go to offensive coordinator Todd Haley and quarterbacks coach Randy Fichtner as well. Roethlisberger has become more of a rhythmic passer since Haley arrived in 2012 and while he still can extend a play like no other quarterback in the league can, he has also shown that he is currently one of the best in the league when it comes to his passing precision.

Amount of pressure aside, Roethlisberger throughout his career has shown that he can still be effective when defenders are bearing down on top of him. In fact, PFF had Roethlisberger as the league’s best under pressured after the 2014 season in which he threw 11 touchdowns against one interception while under duress.

When PFF rolls out their least-pressured QB stats next year, look for Roethlisberger to be near the top once again. For starters, center Maurkice Pouncey should be back this year and that will help cut down on numerous pressures that Roethlisberger faced up the middle last year with Cody Wallace as the starter. Additionally, Alejandro Villanueva should take another step forward in his improvement this season after being thrust into a starting role last year in Week 6.

Assuming Roethlisberger can avoid injuries this year, he’s poised to have another monster year and perhaps even a career-best. The less pressure he has to face the more likely both of those things happen.