Ben Roethlisberger came in at 21 on this year’s edition of NFL Network’s Top 100 players. Based on those results, it makes him the 5th QB in the league. For Steelers’ fans, there is certainly a level of frustration in seeing that. Another perceived slight, never giving proper credit, even if it is a meaningless list whose credibility has been questioned by those who supposedly vote.

But what might be more frustrating is the explanation behind the pick. Another year, another narrative of Ben Roethlisberger, sandlot quarterback. A couple of quotes from players who discussed him.

“Backyard Ben. He’s just running around, doing whatever, looking downfield. Just bombs it downfield. That’s his MO, that’s what he does.” – Brandon Williams

“He led the Steelers to the playoffs again with his bold brand of backyard ball.” – Narrator

“Backyard Ben. It’s going to be a long day for the defensive line. Because he doesn’t have that normal quarterback clock.” – Carlos Dunlap

Backyard Ben. Is that really who he is anymore? Heck, take a look at this year’s highlight film accompanying his ranking. Most of that isn’t Backyard Ben. It’s Precision Ben. He’s evolved, even if the narrative has stayed the same.

Many Steelers’ fans might realize this but I wanted to go through a couple different examples of Roethlisberger’s improvement from the pocket and changing his game from sandlot to tactical striker.

Ben earned high marks for his deep ball accuracy last season. Maybe more than ever, he’s shown the ability to be a rhythmic deep ball thrower, planting, hitching, and firing, with excellent accuracy. Let’s visit his 35 yard hookup with Darrius Heyward-Bey in Week 2 against the San Francisco 49ers.

The call is Todd Haley’s 62 Z Indy Post. A play that as I’ve gone back through the season, I’ve seen time and time again. Here it is in the Dallas Cowboys’ 2006 playbook, where he served as passing game coordinator, borrowing the concept to everywhere he’s gone. 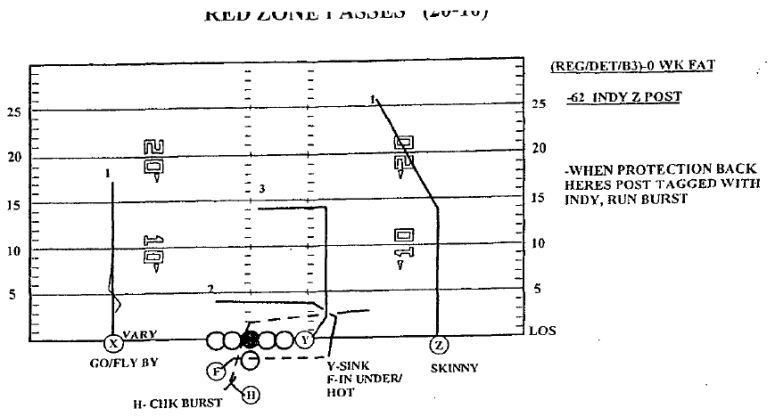 The 49ers are in Cover 2. It leaves the MOF (Middle Of Field) open for DHB on the post. The inside leverage from the left corner doesn’t both him, that’s where the route is going anyway, and he stems off the inside shoulder of the strong safety, gaining leverage. The dig by Antonio Brown up top help holds the free safety, not allowing him to jump across the post.

Yes, in the diagram above, you’re looking at a streak route but I imagine there’s a sight adjustment (Haley’s offense gives its receivers plenty of freedom). Given the bracket look of the CB sinking at the free safety, it makes sense for Brown to cut his route off. But I digress.

Back to Ben. Reading high to low (almost everyone is open on this play), off his playfake, Ben hitches once and fires the ball. It hits Heyward-Bey nearly in stride for six.

Our next look comes in Week 13 against the Indianapolis Colts. It’s a game Pittsburgh won handily but with less than 30 seconds to go in the half, the Steelers led by just four. This touchdown to Markus Wheaton shows supreme timing and ball placement. Comeback from a wide split (splitting the numbers and the sideline). Little margin for error with the corner knowing he doesn’t have to defend anything vertical.

Watch how quickly the ball comes out, already gone from Ben’s hand well before Wheaton plants to make his break.

And then from the “live” view. Three step drop from the gun, plant, and throw a dart. No hesitation from #7.

The last example will show Roethlisberger’s ability to go through his progressions. 3rd and 11 vs Denver. Seven man protection, only three receivers in the pattern, against the Broncos’ 2 Man. Two high shell with the corners playing trail technique (inside hip) underneath.

Predictably, there’s nothing there initially and Ben has to work off his initial read of Brown. He comes across the field to his #2 in the read, Wheaton. He’s blanketed to the inside, the corner playing excellent technique, so the receiver smartly breaks down and sits on the corner’s outside shoulder. The corner falls, opening Wheaton up and Ben hits him.

Let’s look at it from the end zone view. This, obviously, isn’t an example of a timing route. Ben has to sit, wait in the pocket, hope something opens up. Maybe the “old Ben” would’ve immediately taken off, leaving the comfort of his pocket, especially at the end as the linebacker breathes down his neck. But he stands tall and delivers a strike to Wheaton, picking up the first down.

The drive ends in a touchdown, cutting the deficit to seven in a game the Steelers would comeback and win. In the victory, Roethlisberger threw for 380 yards, 3 touchdowns, and completed 77% of his passes.

Yes, Ben is still a huge frame and a unique challenge to bring down. And he will still occasionally keep the play alive the way he did early in his career. But he’s grown up.. A fine wine, reaching its peak. His playing style in his first few years was a little rough, a little dirty. If he was a Peanuts’ character, he’d have been Pigpen. Now, he’s more like Linus. More refined, a little extra careful.

So the next time I hear Roethlisberger referred to as the “backyard” or “sandlot” quarterback, to stick with the metaphor, I’ll just hear the voices of those Charlie Brown adults in my head.