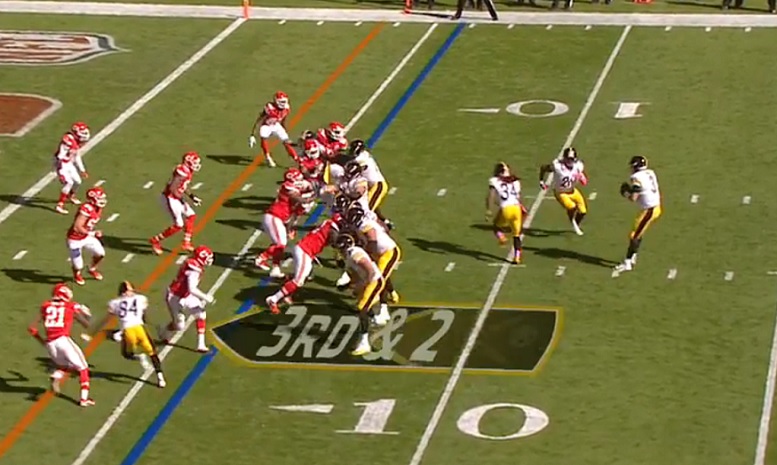 As mentioned in an earlier post on Monday, the Pittsburgh Steelers could decide to use a personnel grouping featuring running backs Le’Veon Bell and DeAngelo Williams quite a bit during the 2016 season. While this didn’t happen a lot in 2015 due to injuries and suspensions, it did happen. In fact, it happened 13 total times between Weeks 3-7.

The first time we saw Bell and Williams on the field together in 2015 was in the Week 3 game against the St. Louis Rams and that happened on the very first play of the game.

As you can see below, both Bell and Williams were lined up wide on opposite sides of the field. They both ran nearly identical routes against what looks like a zone defense with both Rams cornerbacks playing off. Steelers quarterback Ben Roethlisberger decided to go quickly to Bell on the right side and the running back managed to break a few tackles after the catch for a gain of 10 yards.

The very next week in the game against the Baltimore Ravens, the Steelers had Bell and Williams on the field together for a total of 5 plays and the results weren’t all that great. Below are the first two of those 5 plays that were run back-to-back midway through the first quarter. Both were designed to get the football in the hands of Bell out of a pistol formation with Mike Vick at quarterback.

In the third quarter with the Steelers offense driving, they again featured Bell and Williams in the same backfield with Vick working out of the pistol. This time, however, Vick hit wide receiver Darrius Heyward-Bey in the back of the end zone for a touchdown.

In the Monday night game against the San Diego Chargers, the Steelers used Bell and Williams together on a total of four plays all of which featured the Wildcat with the former lined up in the shotgun as the quarterback and the latter lined up in the slot. All four plays included Williams circling back into the backfield and Bell either handing the football off to him or keeping it himself. Those four plays, however, only netted 10 total yards that included the play below which lost 4.

The final three plays of the 2015 season that featured Bell and Williams on the field together came during the Week 7 game against the Kansas City Chiefs with Landry Jones at quarterback. You probably remember the first of these 3 plays which was a pass to Williams on 3rd and 2 from the Chiefs 6-yard-line that resulted in a drop by the running back. The final two plays resulted in gains of 3 and 8 yards respectively.

To recap, the Steelers 13 plays featuring Bell and Williams together on the field netted a total of 43 yards. As noted, Roethlisberger was only on the field for one of these plays.