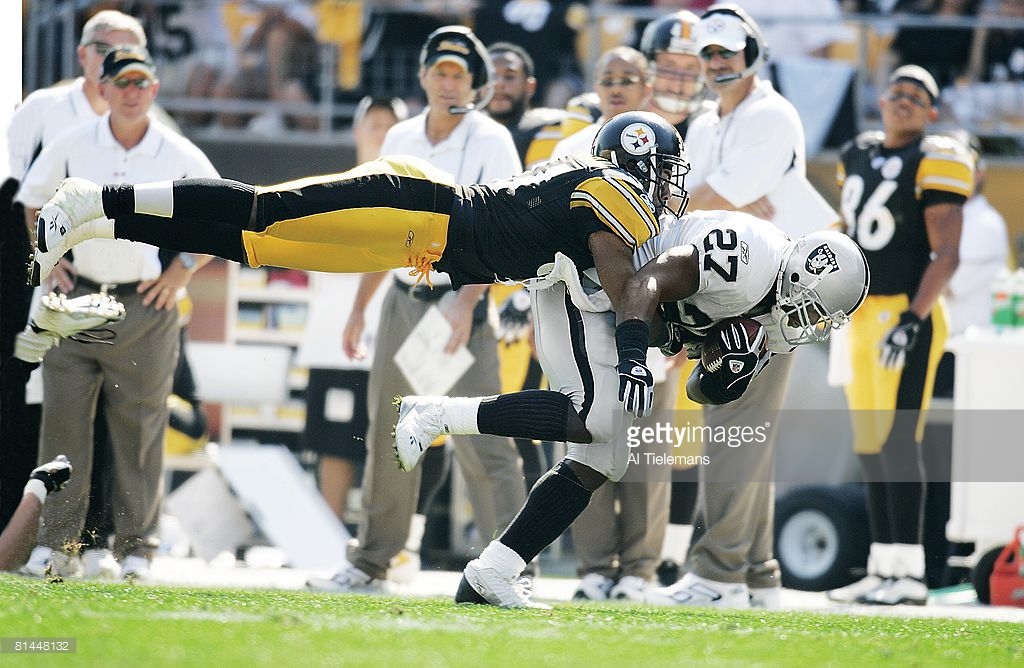 Ok, first of all. Wow, I love that picture. Logan, full extension, laying out an Oakland Raider. Dick LeBeau, Bill Cowher, and Hines Ward looking on in the background. I want that photo framed above the fireplace. Heck, I want it as the wallpaper in my house.

I’m doubling down on more familiar names, going from Chukky Okobi last time to Mike Logan, who may be even more recognizable than Okobi.

Early in his tenure, Kevin Colbert was all about grabbing safeties in free agency. Brent Alexander in 2000, Logan in 2001, Tyrone Carter in 2004. Logan was drafted by the Jacksonville Jaguars 50th overall in 1997. He spent four years there, starting 11 games in his final season. The Jaguars didn’t bring him back but that resume was enough to get him a look in Pittsburgh in a backup role behind Alexander and Lee Flowers.

He was allowed to wear #31, still the only player to do so since Donnie Shell. Most speculate Logan’s Pittsburgh roots and admiration for the should-be Hall of Famer made him an exception.

Despite being a backup, he was still able to make an immediate impact and his big plays came in bunches. Twice in 2001, he picked off a pass and recorded a sack in the same game.

It was more of the same the following year, including a 46 yard interception off Peyton Manning that would help secure the Steelers’ 28-10 victory. He also forced a pair of fumbles, something he did in five consecutive seasons, spanning from his final year in Jacksonville to 2004.

In 2003, he became a starter. He finished the year with 93 total tackles and recovered three fumbles though he didn’t come away with an interception.

With the team drafting Chris Hope and Troy Polamalu in back-to-back seasons, Logan was shuttled to the bench for 2004. A hamstring injury limited his season to just three games, 7 tackles, and the team finally placed him on IR in mid-October.

He would spend two more years with Pittsburgh, apart of the Super Bowl XL champions. When he won, Logan exclaimed he wouldn’t go to Disney World, but the local Kennywood Park to celebrate.

From someone who was born in Pittsburgh, that shouldn’t surprise any of the locals.

Post-football, Logan began a broadcasting career, hosting the Mike Logan Show on TribLive Radio. That appeared to end in mid-2014, according to their archives, though I could be mistaken.

He’s also made his mark in coaching, becoming the special teams and secondary coach for a private school in Pittsburgh.

There have, unfortunately, been downsides. The rigors of what ten years in the league does to a body. In 2012, Logan told the Pittsburgh Daily Bulletin he’s undergone five surgeries either during or after his football career. At only 38, he dealt with arthritis, tendinitis, and depression, the latter possibly linked to the four concussions suffered during his career.

It’s a sad footnote but big picture, Logan was a local boy living the dream and someone who is still making a positive community impact today.

Mike Logan, your blast from the past.