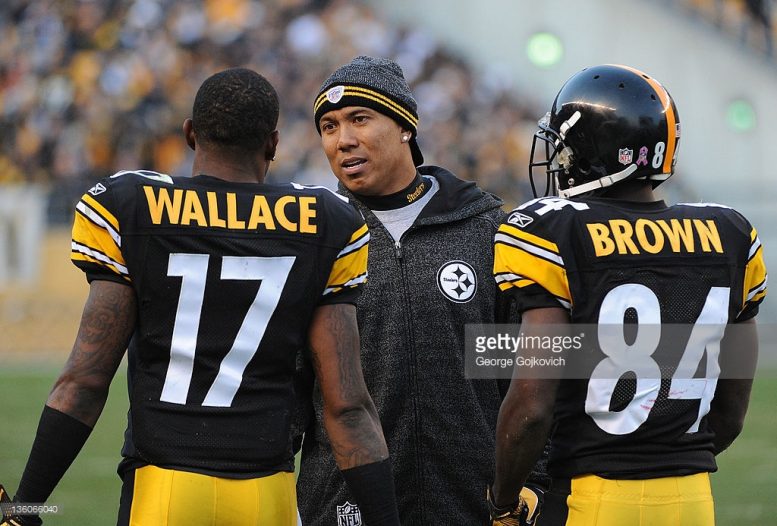 Do you remember what happened during the Pittsburgh Steelers 2012 training camp? It started off with wide receiver Mike Wallace holding out for a new contract and ended with fellow wide receiver Antonio Brown getting one instead. What a great decision that was by Steelers general manager Kevin Colbert even though it was rumored at the time that Wallace was offered the same, or similar, deal that Brown wound up signing.

Since then, the careers of Wallace and Brown have obviously gone in separate directions. While the two wide receivers posted similar numbers for the Steelers during the 2012 season, with Brown recording two more receptions than his counterpart, Wallace had 49 more receiving yards and 3 more touchdowns.

After the 2012 season was over, Wallace signed a five-year, $60 million contract with the Miami Dolphins. and while he only earned $27.1 million in his two seasons with them before being traded to the Minnesota Vikings in 2015, he wound up earning another $9.9 million that season for a grand total of $37 million in his first three seasons away from Pittsburgh. While released by the Vikings this past offseason, Wallace was quickly scooped up by the Baltimore Ravens, who signed him to a two year, $11.5 million contract. As part of that newest deal, Wallace will earn $5.75 million in 2016 which would bring his total earnings from 2012-2016 to $45.492 million.

So, how much has Brown earned since signing his current contract back in 2012? Assuming the Steelers don’t give him a new deal, or pay him forward any of his scheduled 2017 base salary prior to the start of the regular season, Brown will have pocketed $33.79 million from 2012-2016. Even if the Steelers were to pay him all but $900,000 of his scheduled $8.71 million 2017 base salary this offseason, Brown’s grand total would still short of Wallace’s by $3.892 million. Don’t forget that Wallace still stands to earn another $5.75 million in 2017 with the Ravens and if that happens, he will have earned $51.242 million since 2012.

From 2012-2015, Brown has caught 198 more passes and has had 2,717 more receiving yards than Wallace in addition to having 11 more receiving touchdowns. Sure, it’s not the Steelers fault that the Dolphins, Vikings and Ravens gave Wallace all of that money, but you can clearly see why Brown expects more this season and potentially a new lucrative contract extension.