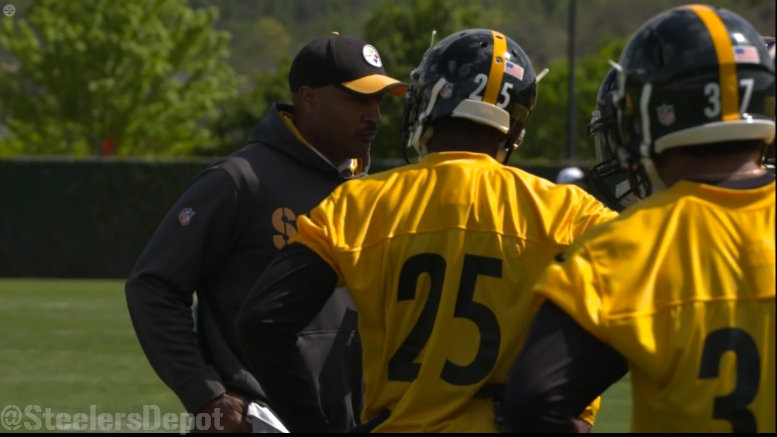 A few days back, the Pittsburgh Steelers held a Men’s Fantasy Camp in which at one stage of the proceedings the attendees got an opportunity to interact with defensive backs coach Carnell Lake. As we detailed on the site at the time, he allegedly relieved himself of a couple of choice bits of information that appear to be the first direct acknowledgement from the team.

Of course, it should be made clear that there is no official transcript of the proceedings, and these comments made were certainly not ‘on the record’ by any means, and are taken in good faith that the attendee who passed along the information is not only being authentic in his accounts but also accurate.

Working under those assumptions, then, one has to wonder what the Steelers might think about the information that Lake divulged about two players that are not part of the organization—one a former employee, the other never affiliated with the team beyond having spoken to him prior to the 2016 NFL Draft.

In reference to the first, Lake let it be known that cornerback Brandon Boykin, who only spent August through March with the team after the Steelers traded a fifth-round pick for him in the final year of his rookie contract, is dealing with a degenerative hip issue that he suggests limits him in some form or fashion.

After recording six interceptions in 2013, Boykin’s role with the Eagles was reduced in 2014, and he struggled to see the field with the Steelers. He then took a while to find a deal in free agency with the cornerback-needy Panthers, signing a veteran-minimum deal only to be released. The Falcons later worked him out but did not sign him. Now the Cowboys intend to kick his tires.

From the player’s perspective, it might be a bit more palatable to have it known that his struggles to stay employed might be tied to a medical rather than a personal issue or otherwise, though that is to be determined by himself, his agent, and the market. But had Lake spoken out of turn in releasing that information, even in that setting, and had the attendee overstepped his bounds by making it public?

(After this writing, Ed Bouchette responded to a reader’s comment in a chat that he had also been told the same information that Lake passed along, and even went so far as to characterize Boykin’s issue as one that “might end his career“.)

Lake also seemed to mention somewhat in passing that the Steelers would have drafted cornerback William Jackson III over Artie Burns had both been available with the 25th overall pick in the 2016 NFL Draft. This had already been verified independently by multiple beat writers, but it was the first time hearing it, allegedly, directly from somebody with the team.

Kevin Colbert always makes it clear, as he did after this draft, that it is the team’s policy not to talk about other teams’ players, which is why he didn’t answer any questions about Jackson at that time, but Lake evidently did. Some in the front office might not be thrilled about that.

As for Burns, I certainly don’t expect such a remark, should he even be remotely aware of it, to have any sort of impact on him. After all, he has quite a bit more on his plate as a 21-year-old provider for two younger siblings, a girlfriend, and a toddler.

I have never attended such an event with the Steelers and do not know if they have any sort of policy communicated to the attendees about what they might be entitled to divulge, but after this ‘news’ day, I can’t help but wonder if they might not revisit those policies and maybe give some more concrete guidelines to whatever staff might be participating with respect to what they might say.