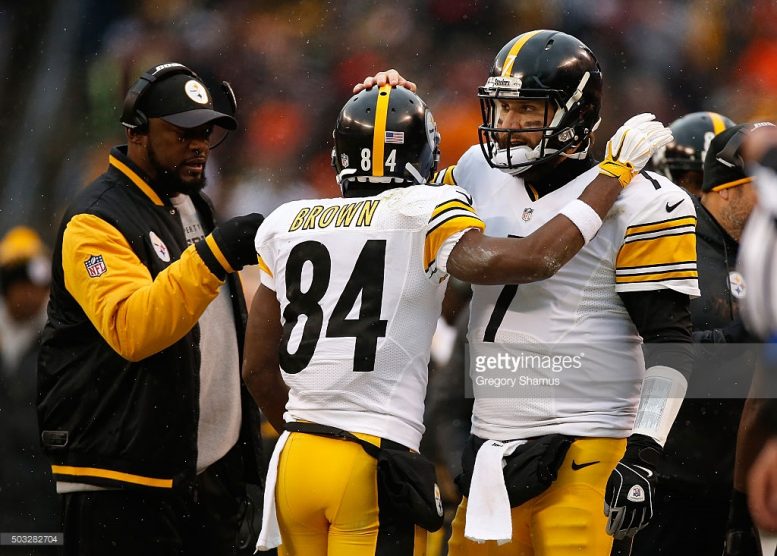 I’m just going to go ahead and say it: you might as well get used to this. The six or so weeks between the end of minicamp and the start of training camp are the desert plain of the NFL calendar, and lists during this period of time tend to be the few oases that sustain us.

And a lot of those lists are going to be about how great the Pittsburgh Steelers’ offense is, specifically wide receiver Antonio Brown, running back Le’Veon Bell, and quarterback Ben Roethlisberger. You won’t find me complaining about that, though, as I find it to be well-deserved, and we have yet another list that sings the praises of this trio.

Pro Football Focus yesterday posted their list of the 10 best offensive players in the AFC right now, and all three of them made that list, with Brown, Bell, and Roethlisberger, respectively, placing second, third, and seventh.

Earlier in the offseason, the same site published a list of the top 101 players in the NFL as a whole right now, and all three also placed in the top 21 overall, irrespective of conference or which side of the ball that they play on, so for all three to crack the top 10 of the best offensive players in the AFC—which cuts down the player pool down to about a quarter—is not even remotely surprising.

The Patriots and Bengals were the only other teams to have multiple players on the list, each represented by two apiece, with the Browns, Ravens, and Texans each featuring one representative. Interestingly, PFF believes that the majority of the highest offensive talent in the AFC rests in the North, with seven of the 10 players coming from the Steelers’ division, and each team represented with at least one player.

With all that said, we might as well pass along some of the laudatory claims that the article directs toward the Steelers’ essential trio, starting with Brown, a three-time All-Pro. The list recounts that he “asserts his dominance via quickness, smarts, and crisp route-running”, and that he “dominates at all depths of the field and makes almost all cornerbacks look mediocre”.

Bell’s segment on the list begins quite simply, saying he “has some insane vision”, followed by a gif that aptly demonstrates that fact. While noting that he was among the most elusive running backs in the league last year, the author writes that “no [running back] came close to matching Bell’s success after first contact, gaining 3.41 yards after contact per attempt”.

Roethlisberger, ranked one spot below Tom Brady, was the only quarterback in the league to rank in the top ten both in yards per target and adjusted completion percentage, which obviously suggests that he was highly successful in running a higher-risk and explosive offense. The author points to Brown’s statistics with and without Roethlisberger, and the fact that he hardly had any time with Bell, as further points in his favor.