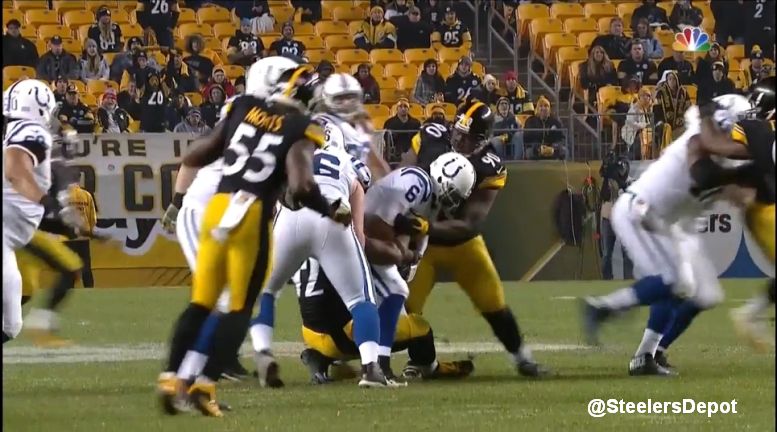 I’m afraid to write that his stock is down for fear that he might spear me in half, but James Harrison’s value is certainly not going up, especially given that 2016 will be in all probability the final season of his career, and, unless something notable changes, he is not in line to start any of those games.

The hope from the team’s perspective, obviously, is that fourth-year outside linebacker Jarvis Jones forces his way onto the field for as much as possible, in contrast to last season, during which Harrison logged the majority of snaps at the right outside linebacker position, chiefly late in games in passing situations, in spite of the fact that Jones was starting those games.

Of course, for a player like Harrison, there really isn’t much of a way to go up from where you once were, especially not at the age of 38. He was the Defensive Player of the Year at the age of 30, and had some prolonged success which, if extended a bit longer, could have had him on the path toward a Hall of Fame career. As it stands, he may lack the sustained productivity to get in, at least any time soon.

Harrison is obviously a fanatical worker, it goes without saying. He supplies all the visual evidence needed to testify to the fact that he puts in every effort to stay in phenomenal shape for the football season, so that is certainly not an issue.

If you look at his stat line relative to his snap count, as well, it would be hard to dispute that he is still a productive player, particularly against the run, but it has to be noted that the majority of his sack production came in a game against a backup left tackle and a backup quarterback, and then another backup quarterback to that backup quarterback.

Harrison is still going to be an excellent role player for the Steelers this year, but he is past the point in his career in which he can reliably be a difference-maker against a higher level of competition. He will have that sort of impact sporadically—and in fact he will likely have fewer opportunities this year in terms of snaps played—but the team can’t look to him as their stalwart on the field.