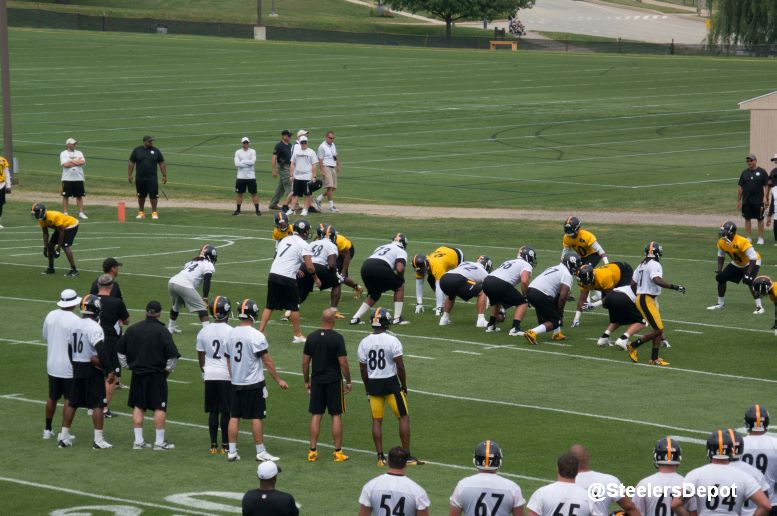 In nearly every training camp practice last season, the Pittsburgh Steelers started the same way: a seven shots period. Ball on the two, seven snaps, only one winner.

Mike Tomlin took no issue in replicating that to kick off yesterday’s OTA practice. Speaking to the media, Ben Roethlisberger talked about the Steelers beginning the session with their seven shots.

“That’s Coach Tomlin’s new thing, that seven shots. We were a little surprised we were doing it but then we weren’t because it’s what he loves. He loves that little period. Anytime you compete ones-on-ones I think it just carries over.”

Based on my tallies from last season’s training camp, the Steelers’ defense “won” on 57 plays while the offense were victors on 55. The defense’s best day came during the eighth practice, stopping the offense six times. The offense’s best was  perfect 7/7 output two days later.

The series has been given a ton of praise by coaches and players last season. Will Allen told Teresa Varley last season he  “contribute it all to seven shots,” referring to the Steelers’ strong red zone defense and situational football. Keith Butler did the same a month later, noting it’s something the team busts out twice a week.

Given its success and competitive nature, it doesn’t figure to be something Tomlin plans to change. Hear it from Roethlisberger and he’ll tell you not much has.

“He’s the exact same (guy) as he was when he got here,” Big Ben quipped with a laugh.