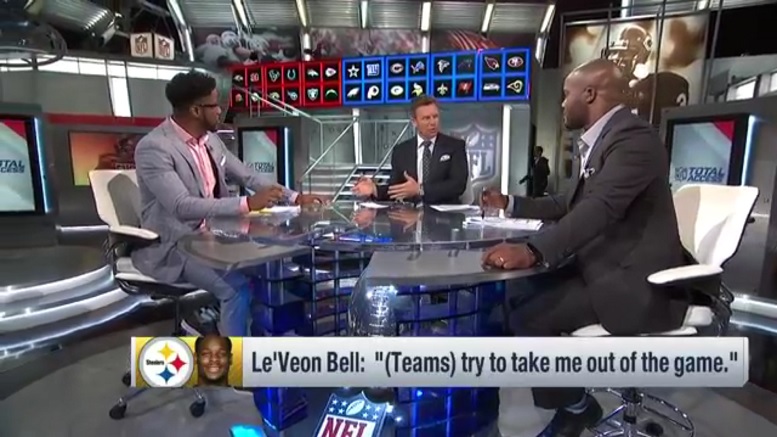 A lot has already been made about the comments made Tuesday by Pittsburgh Steelers running back Le’Veon Bell as it relates to him believing the Cincinnati Bengals purposefully attempted to injure him last season. After already being blasted nationally on ESPN’s “First Take” by Stephen A. Smith and Skip Bayless for his recent comments, two former NFL players seemingly sided with Bell on the Wednesday edition of NFL Total Access.

“Yeah, he’s one of the top players in the National Football League,” former NFL fullback Michael Robinson said when asked if he gives Bell’s recent comments any credence. “They’re competing. I’m not saying that it’s necessarily right, but I know of some backs who get their ankles twisted at the bottoms of piles and you have to get up kicking. Be flattered by it a little bit. At least they’re coming after you because you’re one of the best players.”

“There’s definitely some validation in what he’s saying,” said Burleson. “I don’t want to sound insensitive when I say this, but it’s part of the game when guys target your injury. And we play a violent sport. So when I had my injuries on the injury report every week, I knew that DB, that safety, that linebacker would target it. Whether it was a shoulder, a knee, an ankle, they’re going after it.”

As far as the future ankle twisting goes, Robinson expanded on his kicking advice for Bell.

“I know it sounds funny, he needs to kick when he gets up,” said Robinson. “Seriously, people will stop twisting your ankle if your feet catch on fire at the bottom of the pile. That’s what my running back coaches have always taught me.”

While Bell vowed Tuesday to be more careful in games moving forward, Burleson warns how that could potentially have adverse effects.

So there you go, Le’Veon, stay aggressive and start kicking your feet more at the bottom of piles moving forward. Oh, and say a few prayers before you play the Bengals again as you’re definitely right, they indeed still be trying to injure you. Just run them slap over.