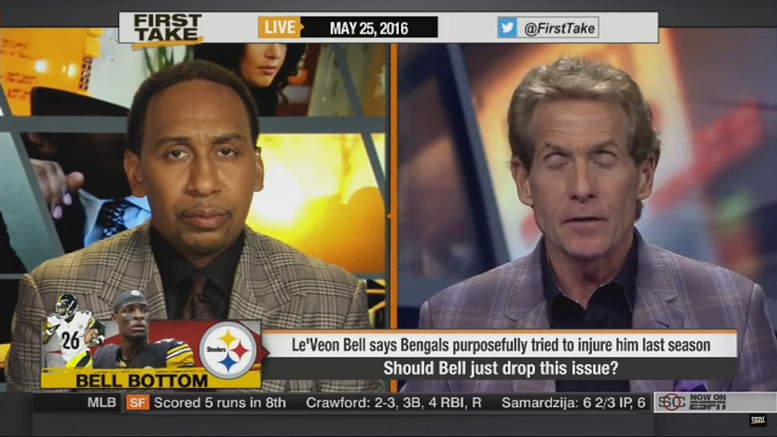 At the conclusion of the Pittsburgh Steelers first OTA practice on Tuesday, running back Le’Veon Bell made it clear that he thought the Cincinnati Bengals were intentionally trying to hurt him last season. After making those comments, Bell’s quotes went national very quickly and on Wednesday morning, Stephen A. Smith and Skip Bayless made it clear on ESPN’s “First Take” that they both believe the Steelers running back should have just kept his thoughts on the matter to himself instead of adding more fuel to the rivalry fire.

“He should drop the issue because it’s not going anywhere,” said Smith. “It’s very physical in the AFC North, which he also admitted. They hate one another. It’s a true, true rivalry, we understand that. I would like to see members of the Cincinnati Bengals exercising more discipline, however, because you’re representing coach Marvin Lewis and you’re not making him look good by conducting yourself in a hooligan-style fashion, assuming that stuff is true and obviously with Vontaze Burfict, and what happened the last time we saw the Bengals, people are going to assume that it is. They want to hit, they want to intimidate, they’re vicious, they’re incredibly talented, so there’s no reason to go the extra mile doing what they’re doing. There’s no reason to do that.”

The always and equally irritating Bayliss then proceeded to pile on top of Smith’s comments.

“I’m surprised at this,” said Bayliss. “This is unbecoming of a Pittsburgh Steeler to come across as whining about, ‘they hurt me, they’re trying to hurt me.’ Really? Come on. Stop it. Just shut up and go beat them next year. You’ve got two shots next year to get even with them and this young man is highly capable of getting even and that’s what he should be focused on.”

I wonder if Smith and Bayliss would feel the same way if both of their careers were put in jeopardy by another person or persons intentionally. Let’s be clear, this wasn’t just any Bengals player that subsequently put Bell out for the season last year, it was linebacker Vontaze Burfict, who has developed a long history of becoming the NFL’s top bad boy in a short period of time. Besides, Bell isn’t the only Steelers player who thinks the Bengals had bad intentions during all three meetings between the two teams last year.

Where do all of you weigh-in on this? Are Smith and Bayliss right to chastise Bell for his Tuesday comments? Should the Steelers running back just stop talking about what happened last year and concentrate on getting his revenge on the field this season?