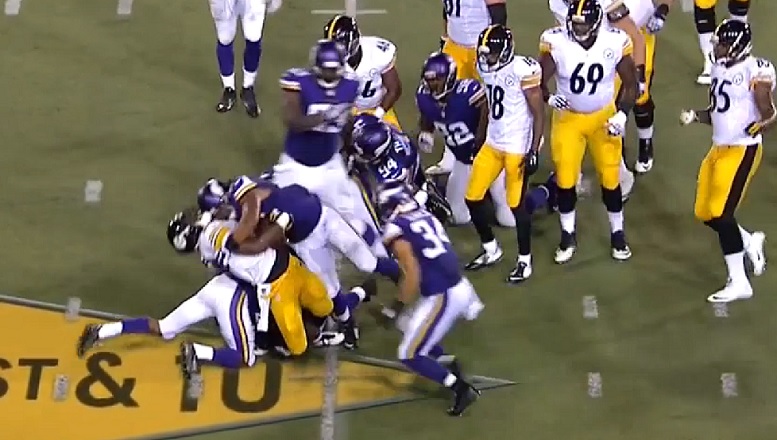 Undrafted free agent running back Cameron Stingily was hoping this offseason to become the second player on the Steelers to make the 53-man roster after coming to the team as a rookie minicamp tryout invitee. He already got halfway there by earning a contract following his minicamp tryout, which is rare in and of itself.

Officially signed on the 11th of May following the rookie minicamp, Stingily knew that he was entering a situation in which he could actually legitimately compete for at least a temporary spot on the 53-man roster, or, at worst, a place on the practice squad.

The Steelers knew that Le’Veon Bell would start the season on the suspended list, and other than DeAngelo Williams, they had no credible backup running back behind the top two on the depth chart, meaning that there was going to be a temporary spot open for the first two games during Bell’s suspension, most likely.

The most viable option to serve as the backup at that point was Josh Harris, who spent the 2014 mostly on the practice squad, but was later promoted to the 53-man roster and got a few carries. He saw more extended action in the Wildcard game when Bell was injured, and he returned in 2015.

Also in the mix was another undrafted free agent, Ross Scheuerman, who offered more versatility, but less size, than the two aforementioned backs. Unfortunately for all three of them, they all got hurt in various ways at various times, which took them out of the running for any sort of spot at all.

Harris was the first to get injured, and he was eventually waived injured. Scheuerman was next. Stingily was the only one of the three to make it to the preseason, but he was tackled and bent backward awkwardly in the Hall of Fame game.

That was the last snap that he took in the NFL. It was an injury significant enough to knock him out for a while, and he was waived injured, having gone on to silence thereafter. The Steelers were intrigued by his size as a potential short-yardage back, but as always, the greatest ability is availability.