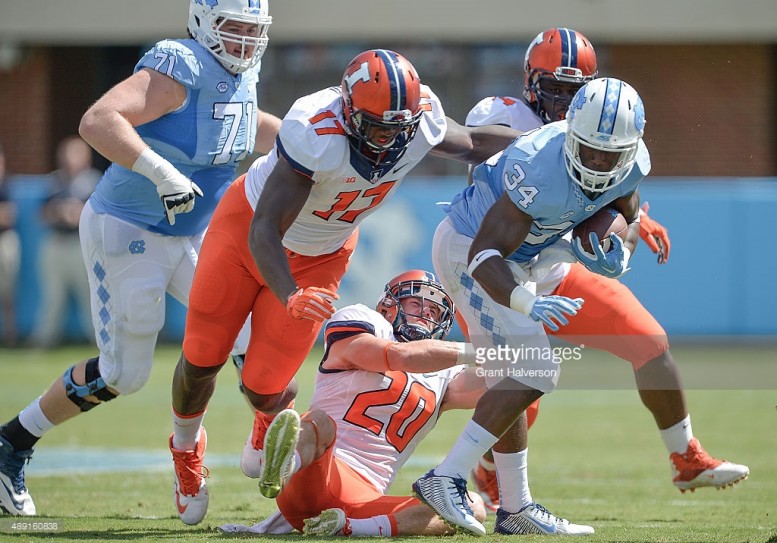 Halfway through the Combine already. Hang out this Sunday and watch the defensive line and linebackers all day today at Indy. Some of the notable players we’re looking at.

– Nose tackle Andrew Billings is built at 6’0/5, 311 pounds but impressive length for that frame with 33 inch arms. He racked up 7.5 sacks last year at Baylor and is widely regarded as the best nose tackle in this year’s draft. Want to see explosion in his ten split and an overall impressive 40 time. Prove you’re a great athlete that can stay on the field in subpackage situations.

– He’s 6’7, 291 pounds, so I’m not expecting DeForest Buckner to move like a running back. But there’s questions about if he’s too stiff of a player to be a successful, consistent pass rusher in the NFL. Showing fluidity and change of direction in drills and tests will be something I’m keying ni on.

– Vernon Butler…man, what a beast. 323 pounds with 35 inch arms and the dude can scoot. This year’s version of Dontari Poe, though not as heavy and probably won’t time as well. But still, the way he moves for a big man is impressive.

– Written about him several times but Javon Hargrave was the last call-up to Mobile but knocked it out of the park. Great athlete and really explosive initial step. His 10 split will be one of the best of his size group.

– Sheldon Day is fun to watch. Really good hand fighter. Should do well in drills and show off the moves he has.

– Temple’s Matt Ioannidids is a guy that really opened my eyes at the Senior Bowl. Didn’t see that kind of athlete and pass rusher on tape. If he can time well, he’ll really set that in stone and make me run back to the video.

– Chris Jones doesn’t have much experience but the skillset is there and I think he’ll rise in this year’s draft. Indianapolis is a great place to do it.

– BYU’s Bronson Kaufusi is tough to figure out. Big, long, I want to see flexibility and bend from him. I imagine he’ll drop into coverage and though he won’t look great, we’ll get an idea of what his hips are like.

– Similar story with Penn State’s Carl Nassib. I think he has the ability to corner and bend the edge but I have seen clips of him struggle to change direction against the run.

– Can Lawrence Thomas look like a better athlete than he appears on tape? If so, maybe he’s a fit in Pittsburgh, standing in at just under 6’4, 286 pounds with 33+ inch arms

– Like I have been preaching, Jihad Ward is going to shoot up boards with the way he performs this week. Raw but a plus athlete to go around his 6’5, 297 pound frame and long arms. When all is said in done, I expect him to go in the second round.

– There are no tackling trees event here but Anthony Zettel can generate buzz with a good showing. A Penn State product, I’m sure there are many reading this who are rooting for him.

– Ronald Blair from the new FBS level Appalachian State has been getting a lot of love on Twitter and draft circles. But now is the time to hang with the big boys and test well. His frame is unusual, 6’2, 284 with excellent length, and ideally, he’ll shed some weight to be an OLB.

He finished 2015 with 7.5 sacks, including two against Clemson.

– I just want to see Dadi Nicolas be able to take direction and not screw assignments up. Was too coddled by coaches at the Senior Bowl. Figure things out on the first try. Don’t have to rep it again or have the coach explain the goal of the drill. If he can do that, because he’ll time pretty well, I’ll call it a successful outing.

– Don’t know much about him but Emmanuel Ogbah is an edge rusher no one in Steelers’ land is really talking about but could be sitting there at the team’s second round pick. 6’4/2 272 pounds and over 35 inch arms makes him a candidate. I’ve read some stuff that he’s stiff so I want to see him flip his hips and check out his cone/shuttle drill times. See if it stacks up.

– Missouri’s Kentrell Brothers is an unimpressive athlete and undersized with below average length. He really needs to do something special here to keep him from getting lost in a deep defensive class.

– People have Leonard Floyd all over the map. Our own Dave Bryan has him as a late first, early second candidate. Others think he could go in the top 15. His tests and workout will help define a clearer picture.

– Kentucky’s Josh Forrest was one of the stiffest, high-cut guys at the Senior Bowl. I’m not expecting much from him in any test of his change of direction. He’ll need to show he’s not as stiff.

– LSU linebacker Deion Jones should put up a great 40 time and be near the top in any athletic drill. He is light though, coming in at 222, but has good length for his frame and should act as a WILL linebacker at the next level.

– There are several that like Tyler Matakevich, he is always around the ball, but I see a really poor athlete. The 40 time is going to shape his narrative and I’m excited to see what he turns in. I’ll be happy if he can break into the high 4.6’s.

– Eric Striker from Oklahoma is short, light, and needs to have some eye-popping times. I think he’ll test well though.