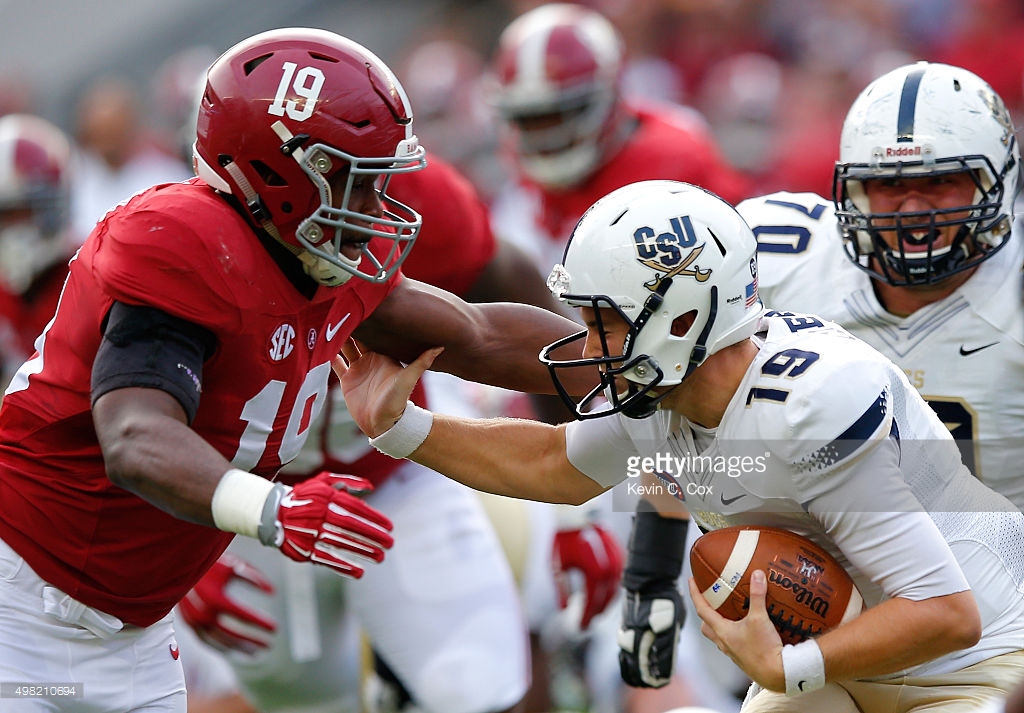 Only one day left. Weekend already flying by. Today kicked off the defense with the line, edge guys, and off-ball linebackers working out. That’s over 100 players with a ton of bonafide first round picks, mainly along the defensive line. Let’s hop to the notes.

Just a reminder, we finish up the combine with the DBs tomorrow.

– The big boys were flying today. But the one that surprised almost everyone was Oklahoma defensive end Charles Tapper. At 271 pounds, he pulled off a 4.59. Honestly thought they screwed up the clock, given they originally gave Victor Ochi the wrong time a few minutes earlier. But it was legit and got people talking. Toss in a 34 inch vert and 9’11” broad and you have a metric king. Most are profiling him as a 4-3 end, and that’ll probably happen, but he has the length (34 3/8 arms) to theoretically let him play in say a system like Pittsburgh.

– Andrew Billings. Woah. A nose tackle who runs a 5.05? That’s motoring. He looked great in drills too, as fluid as you can hope for from a frame like that. I tweeted it earlier. If you’re going to even entertain the idea of a nose tackle, he better be able to get after the quarterback. Billings has the production and numbers to back that up. I’ve defended Steve McLendon a ton but I’m not opposed to thinking about one if I can get an elite player. If Billings falls to 25, which is highly debatable, he’ll be in the conversation for Pittsburgh. Added him to my list.

– Sure, Joey Bosa’s 40 was iffy. But he showed explosion in his ten split, a pair of 1.69’s, and killed it in the agility drills. 4.21 short shuttle and 6.89 in the three cone, two of the best numbers of the entire group. He’ll run better at his Pro Day, people will forget about the Combine number, and he’ll get in the top five. Book it.

– I just love to see Sheldon Day compete. Granted, teams request to see defensive linemen in OLB drills, but Day – the only true defensive lineman – went out there and held his own. He’s dropped a couple times at Notre Dame and even, just for fun, showed hands and hops.

– South Carolina State’s Javon Hargrave continues to build his stock. Just the travel he’s done shows a desire to compete and incredible exposure for a small school kid. He’s played in the Shrine Game, the Senior Bowl, and now the Combine. Those small school players are tough evaluations because of a lack of body of work, being able to compare how they translate, so going through this gauntlet is critical.

And he’s done a great job at all three places. Today, at 311 pounds, the defensive tackle ran a 4.93 and jumped 34 inches in the vertical.

– I keep preaching it, back to my Senior Bowl notes and scouting report on Dadi Nicolas. He is Howard Jones. Both 6’2, 235, with crazy impressive verticals (Jones 40.5, Nicolas 41) and similar short shuttle times (4.41 to 4.38). They both have issue with taking instruction, have to be told things again and again, and need a lot of coaching. Mark Gorscak had to remind Nicolas of where to line up when running his 40. Nicolas played against better competition and I think he’ll get drafted, unlike Jones, but his best fit is as a situational pass rushers in a 4-3.

– Gotta be honest. Thought Jihad Ward would test better. 5.11 40, 25 inch vert, and 9’3″ in the broad. Not awful, especially considering his mass, and we’ve seen him dunk a basketball, but I thought he would really be the talk of the group. Didn’t happen.

– I have no idea who this Connor Wujack kid is from Boston College but man, he was impressive today. Fluid, smooth player who at 291 pounds, ran a 4.91, jumped 34 inches, and a 4.27 short shuttle. Only four players turned in a better time and none were heavier than him. 11 TFL and 4 sacks this year is nothing to turn your nose at.

– Bronson Kaufusi is a high-cut guy but he wrecked the Combine today. In a good way. My teenage slang isn’t good.4.87 at 285 pounds, 4.25 short shuttle and 7.03 three cone. He kept looking down at the bag in drills, but showed off some surprising athleticism.

– Appreciate players who immediately take to coaching. Buffalo Bills’ DL coach asked for guys to show a more violent punch on the bags and Kenny Clark knocked it out of the holder’s hands.

– Wanted to see Lawrence Thomas show a better punch in drills. He’s going to be two-gapping in the NFL and has to generate better power.

– Small moments give a glimpse into how guys listen and take in coaching. Same DL coach told players to go slower through drills. D.J. Reader went right after that but rushed through it, leading the coach to say “slow down” again.

– Shilique Calhoun looked like a natural outside linebacker. Seamless in his transition when asked to drop his hips and turn. His 40 time was poor (4.82), and I’m sure many will remind my of Jarvis Jones, but the agility drills – showing flexibility – are vastly different. Let me just stack them up for you. Keep in mind Jones’ numbers are from his Pro Day, where numbers are almost always better than the Combine.

– I’m geeked out Maryland’s Yannick Ngakoue. Another guy who fit right at home in OLB drills, having no issue dropping into coverage. His 1.65 split is solid and he posted respectable numbers in the vert and broad (34.5, 9’10”).

– I wrote this morning I didn’t know much about Emmanuel Ogbah from Oklahoma State but based on Twitter’s reaction, people were very surprised to see him turn in such a high 40 time of 4.63. Has people running back to the tape.

– I’m still steadfast in viewing Noah Spence as a mid to late first rounder and his rough 4.8 40 (his splits were solid, to be fair) is going to get people thinking that way. There are continued grumbles that he didn’t interview well, though this is the season of smokescreens. Think there is a chance he falls to Pittsburgh at 25. We’ll see if they pull the trigger.

– Boise State’s Kamalei Correa is probably going to turn out to be a second round pick by the time the draft kicks off. One of the few explosive edge guys out there today, even if his testing wasn’t that great.

– Utah’s Jason Fanaika did pretty well in the agility drills but in workouts, he just looked tight-hipped. Don’t really know if he can drop into coverage in the league.

– Ditto with Southern Utah’s James Cowser. He tested even better than Fanaika though, so maybe I should give them a closer look.

– The group ran well. Leading that was Ohio State’s Darron Lee with a 4.47 and ridiculous 11’2″ broad. He’s 232 pounds but moves like a safety. Very Ryan Shazier like and I’ve already been asked a ton about Lee coming to Pittsburgh. Answer? Not sure yet, check back later, says the magic eight ball.

– For 267 pound Stephen Weatherly to run a 4.61 is excellent. Wish he would’ve done the agility drills but I’m guessing he would’ve struggled and opted out while he was ahead.

– Reggie Ragland isn’t going to blow anybody away but his times were solid. I don’t have issue with his speed and range, even if he isn’t going to excel at it. A fun comparison of 40 times and splits.

And oh yeah, Timmons was 234 pounds, 13 lighter than Ragland. No one has had any problem with Timmons being a three down guy.

– Oklahoma’s Eric Striker predictably looked better in workouts but his starting points aren’t good. 5’11/3, 227, and a 4.8 40 with nothing special in the other categories.

– De’Vondre Campbell from Minnesota generated buzz today, running a 4.58 and 1.67 splits, some of the better times of the day. Another guy making scouts go back to the tape.

– Travis Feeney ran well, a 4.5 flat, but has a Gumby body. Tall, thin lower half. He sure did jump out of the gym but he’ll have to be a WILL, playing in space.

– Takes a lot for Kentrell Brothers to break down in coverage. Straight line speed was poor, running a 4.89.

– It’s not a false step but guys like Rutgers’ Steve Longo and Temple’s Tyler Matakevich have to take an extra step to be able to push off when flipping and turning in coverage. Not able to drive off the outside foot and gain ground, taking a lateral step with their inside foot and powering off.

Someone like Blake Martinez, on the other hand, was able to drive with a powerful step. He had a nice day.

– Jordan Jenkins didn’t have a great day. Timed poorly, the high 4.8’s, and repeatedly screwed up drils, being forced to repeat because he guessed or turned the wrong way.

– Last note. Wisconsin’s Joe Schobert was solid. Quick, efficient, and though I don’t care very much, caught the ball cleanly. 4.76 is a good enough time.