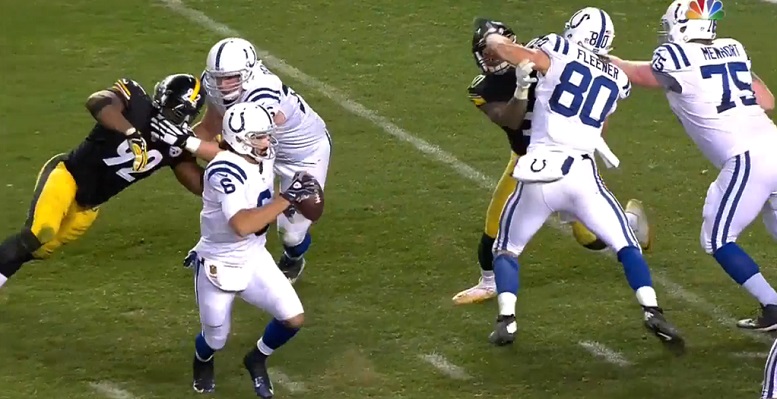 James Harrison is technically under contract with the Pittsburgh Steelers for the 2016 season, but that doesn’t ensure that he will continue to play for the team for another season, and that doesn’t figure to be the greatest news, at least at the moment as we just begin to take stock of the offseason and recount the 2015 season.

Considering the fact that the Steeler relied upon him this past season to be a valuable asset in their four-man rotation at the outside linebacker position—and that he logged more snaps than all of his peers at the position, even after missing a game—there is still clear evidence that he left this most recent campaign with gas left in the tank.

In spite of the early offseason proclamation by newly anointed outside linebackers coach Joey Porter that the Steelers would like to try to limit him to about 25 snaps a game, his playing time far exceeded that, leading all at his position group with 611 snaps played.

Working that out to a full 16-game season, that accounts for an average of over 38 snaps a game, but in the games in which he actually played, he actually averaged closer to 41 snaps per game, which is about a 65 percent increase on his snap count than what the team had purportedly gone into the process having accounted for.

Ignoring the quantity of his playing time, of course, the fact is that he also kept up a level of quality in his performance that was still the best that the Steelers had to offer at the outside linebacker position. While he led the position with five sacks in 55 percent of the team’s defensive snaps—which is far from elite—he proved to be a reliable asset in all levels.

He led the outside linebackers with 40 tackles, but he also recorded an interception—at the goal line, no less—in addition to causing two forced fumbles, also defending four passes, which was just one off of his career-best mark in 2010.

The real concern for the Steelers at the linebacker position is the simple fact that they lack any elite talent there; that is, at least for the time being, as we wait on the potential of Bud Dupree, the team’s first-round draft pick in 2015 who moved into the starting lineup late in the season.

Dupree started off well, registering sacks in each of his first two games, but he finished with just two more sacks during the course of the rest of the 14 games, and he admitted that he hit a rookie wall later in the year.

They are counting on him to develop into a star, because they are wildly unlikely to find that star between Jarvis Jones and Arthur Moats, both solid and capable players, but neither championship material. And a 3-4 base defense that lacks star pass rushers has to get by with quality depth and platooning. It worked out okay in 2015 in that regard, but losing Harrison in that equation would be a big blow, based on his body of work from this past year.