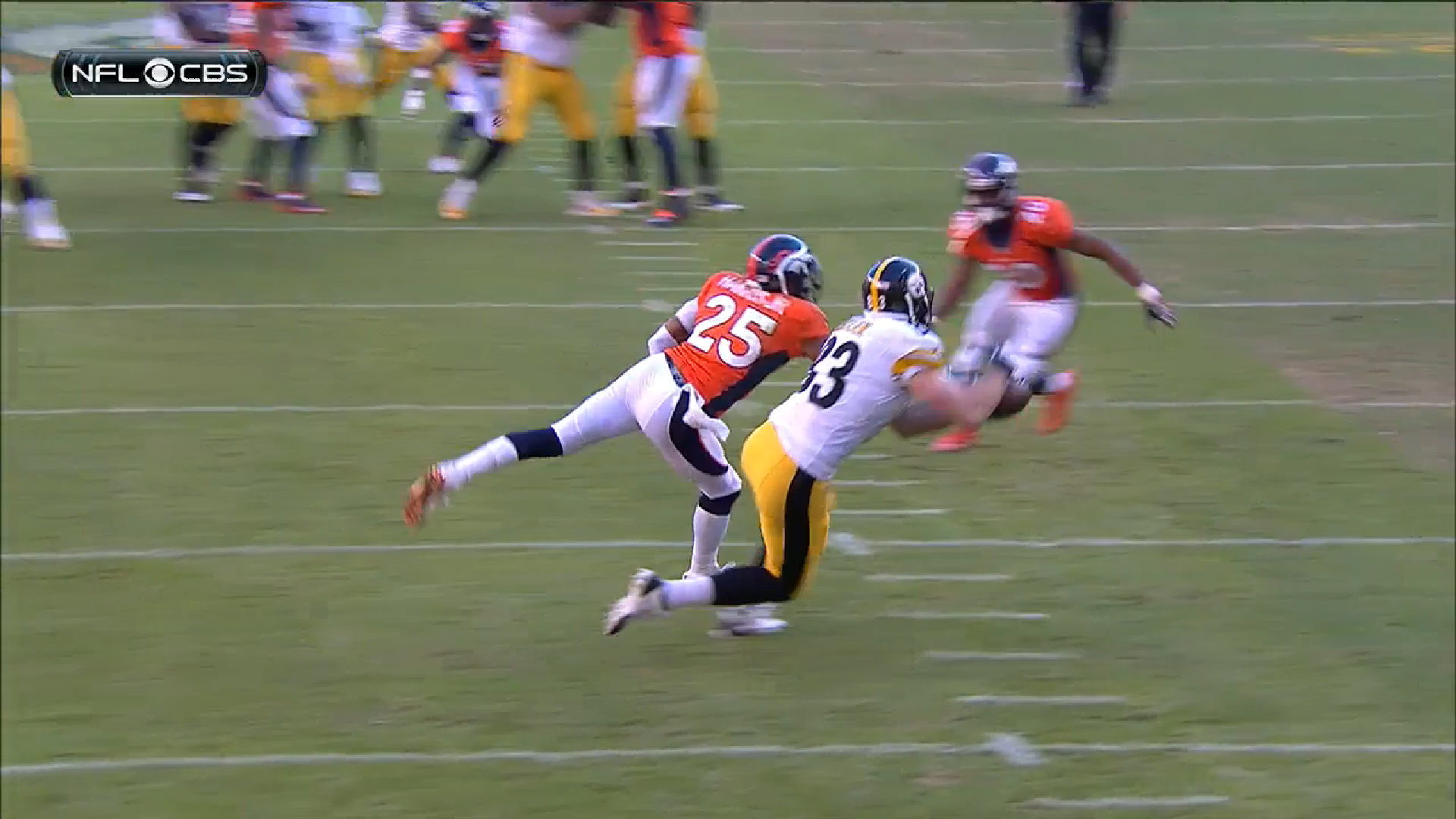 As much as many predicted that the Pittsburgh Steelers’ passing game against the Denver defense would largely be predicated on short and intermediate throws because of the limitations forced on the team stemming from Ben Roethlisberger’s injury, that clearly did not prove to be the case.

Even in a game without Antonio Brown on the field—who was at home nursing a concussion—the Steelers’ wide receivers still manage to catch 18 of Roethlisberger’s 24 completed passes, with six going to the running backs and tight ends. But the most disappointing performance from that group of targets was, unfortunately, the 11-year veteran, Heath Miller, who caught just one pass for five yards on three targets on the day.

Not that he deserves all the blame, first, for his limited number of targets, and second, for the targets that he failed to bring in. But the first incomplete pass in his direction was a big play, and upon further review, it was a big play by the defense.

The Steelers had driven down to the Broncos’ 18-yard line before Roethlisberger took a seven-yard sack to set up a third-and-13 play. On that play, he had Miller coming open out of a bunch formation over the middle of the field, and he looked for the tight end, but cornerback Chris Harris was able to get over in time and get a fingertip on the ball.

Harris’ minor deflection was able to reroute the trajectory of the ball enough to cause the incompletion, as Miller was right behind the defensive back and had no time to react. Still, he nearly got the ball between his elbows. Ultimately, this proved to be a big play, as a completion would have given Pittsburgh a first down near the 10-yard line, rather than settling for a punt.

Miller did not have another target until the third quarter, on a first-down throw, with a linebacker draped over his back on a route crossing the shallow middle of the field. But this time, the ball bounced squarely off his chest plate before falling for an incompletion.

His lone reception in the game came three plays later on the same drive following a first down that put the Steelers’ at the Broncos’ 15-yard line. After an incompletion on first down, Roethlisberger looked to Miller for some positive yardage, finding him sitting down in front of the linebackers three yards past the line of scrimmage.

It was all he could do to spin through contact and pick up an extra two yards for a five-yard gain, his only yardage contribution throughout the entire game. it also seemed to be the only way that he could gain enough separation from the Broncos defense without them pressing further.

Miller was anticipated to be an integral component of a successful Steelers game plan against the Broncos, but through a combination of good defense and Roethlisberger seeking other options when he was open—he should have been the ultimate target on the early fourth-and-one failure—the veteran tight end was close to a non-factor in the passing game.