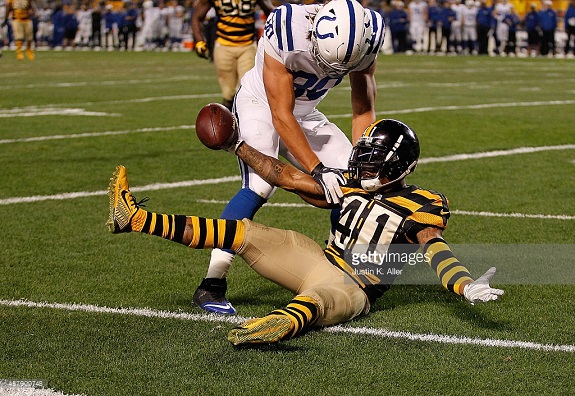 I hope you’re sitting down. For the first time all season long, Mike Tomlin was open to the possibility of making changes at cornerback, he told reporters in his press conference today.

Tomlin was immediately asked by David Todd to evaluate Antwon Blake’s performance and if he would consider making changes at the position.

“He had some difficulties in the game from a tackling perspective,” said Tomlin of Blake’s Sunday performance against the Seattle Seahawks. “I think you can say the same about Ross Cockrell. We’re going to give both guys an opportunity to rebound, but we’re also going to look at other options this week as well, as that’s the prudent and appropriate thing to do.”

As far as the other options go, Tomlin admitted that seldom-used cornerback Brandon Boykin is included in them.

Gay played mainly on the outside in 2014 with Brice McCain getting most of the work in the slot. After McCain left to the Miami Dolphins, Gay has played in the slot in almost subpackage formation this year. Tomlin also admitted that Boykin hasn’t seen the field because he’s an interior corner and Gay, of course, is the starting slot corner. Presumably, Tomlin’s comment on looking at Gay play on the outside would mean removing Cockrell or Blake and sliding Boykin into the slot.

In essence, what we’ve said here for weeks.

According to our Jon Ledyard, Blake has missed a whopping 28 tackles in 2015, well in front for the team lead. He’s also been clearly hampered by at least a thumb injury, and probably several other issues, that have led to an inability to wrap up and tackle.