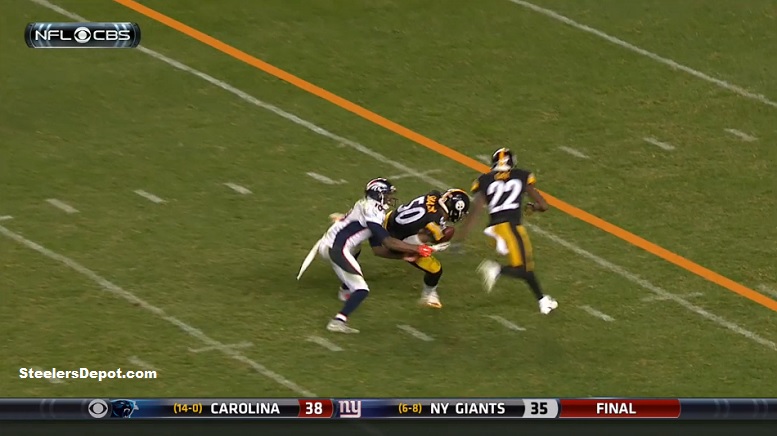 Its been a tough second season for Pittsburgh Steelers linebacker Ryan Shazier as a shoulder injury forced him to miss valuable playing time earlier in the year. However, the former first round draft pick out of Ohio State did manage to record his first career interception Sunday in the team’s come from behind win over the Denver Broncos and it couldn’t have come at a better time.

With the game tied at 27 with 4:28 left in the fourth quarter, Shazier stepped in front of a pass intended for Broncos wide receiver Emmanuel Sanders to record his first career interception. On the play, Broncos quarterback Brock Osweiler had escaped the pass rush to his left. Shazier, who had dropped into zone coverage on the left side, broke on the football as Osweiler went into his throwing motion and he came up with the huge pick.

“This is my opportunity. I have to get it here,” Shazier said he thought in the moment before he picked off Osweiler, according to Jacob Klinger of PennLive.com.

Shazier’s interception resulted in the go-ahead touchdown as quarterback Ben Roethlisberger was able to connect with wide receiver Antonio Brown from 23 yards out.

After the game, head coach Mike Tomlin was asked to comment on Shazier’s interception.

“We drafted Ryan a couple of years ago in round-one to make plays like that and he delivered,” Tomlin said.

Shazier registered 6 total tackles and a pass defensed Sunday to go along with his interception.

Here is what Tomlin thought of the interception after it happened.