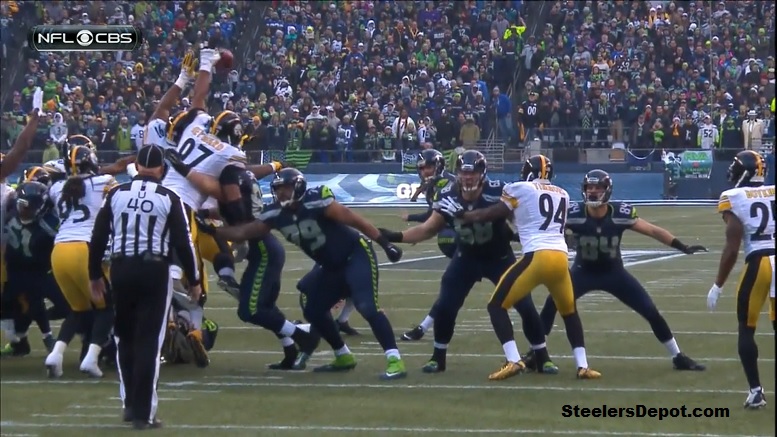 During Sunday’s loss to the Seattle Seahawks, Pittsburgh Steelers defensive end Cameron Heyward blocked an extra point attempt with 3:04 left in the third quarter, It was Heyward’s second blocked kick of the season and his third of his career. During a Thursday interview on Steelers Nation Radio, special teams coordinator Danny Smith was asked why Heyward has had success this season in that area.

“It’s timing,” Smith told Bob Labriola. “You look at his hand placement on the ball. We put him in a place where the ball’s going to come out at. We know the angles the ball travels whether the ball is in the middle of the field, or whether it’s on the right hash, whether it’s on the left hash. And if you look, he’s aligned in those visions, because along that line of where the ball’s coming out and his timing is outstanding and that was a big play.

After the block took place, you could see Heyward and nose tackle Steve McLendon on the Steelers sideline claiming that each got a piece of the football on the block and Smith talked about that on Thursday during his interview.

“Him [Heyward] and Steve are fighting over who really got it and Cam did get it, although Steve’s fighting that it did hit his thumb,” said Smith. “I’m still looking for that and I checked his thumb today and it’s about the size of mine and so it’s not an overly sized thumb.

“But it’s nice and it’s the little things in meetings and things like that that these guys fight through because of their pride level and their competitiveness in professional football that drives them as players and you as a coach to continue to do those things. But I’m real proud of that unit and we need to continue it.”

Sunday night, the Steelers will play the Indianapolis Colts and they’ll face a veteran kicker in Adam Vinatieri who has had 10 field goal attempts and 9 extra point attempts blocked during his long career.