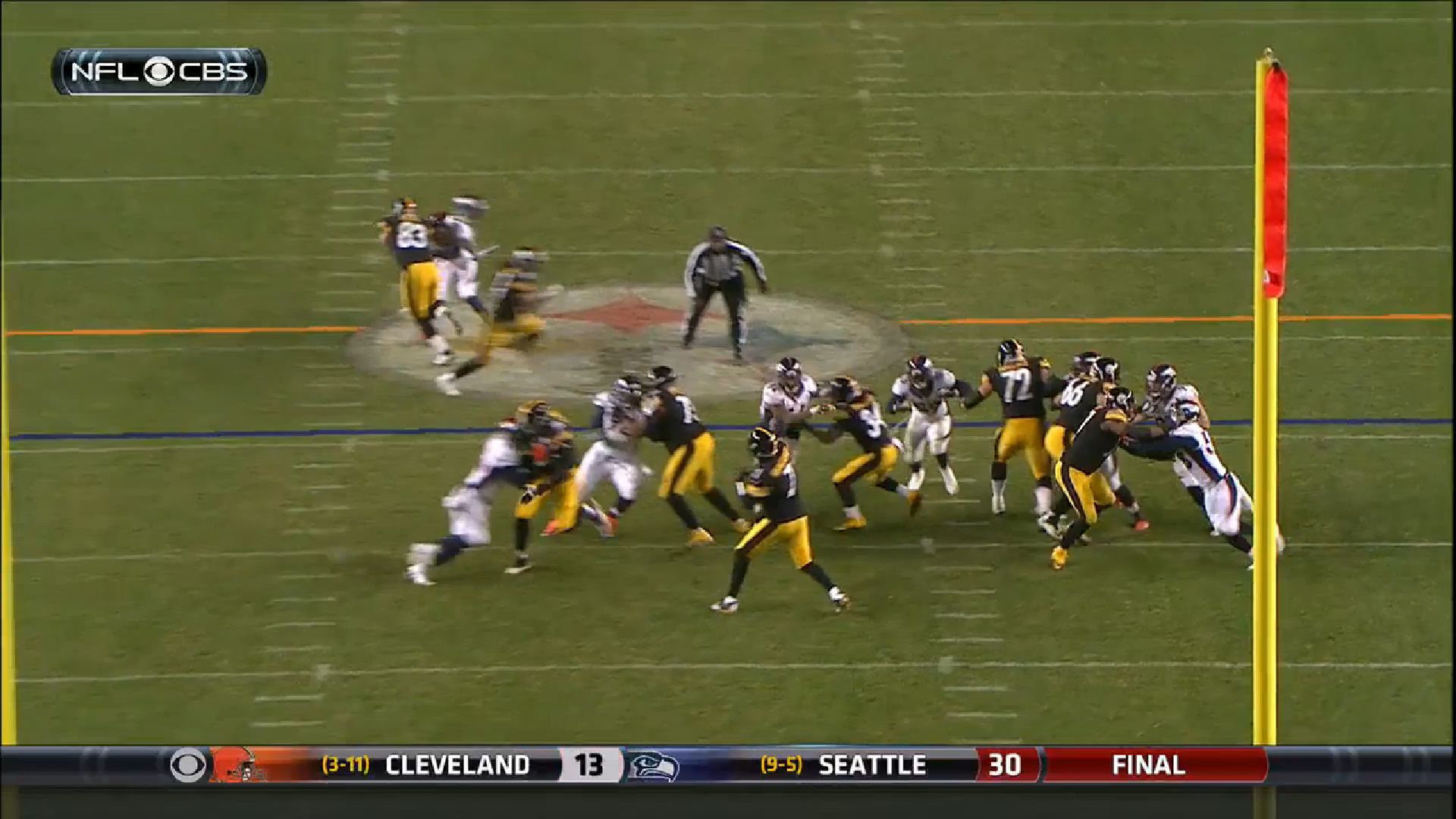 If there is one thing that I noticed about the Denver Broncos defense against the Pittsburgh Steelers, it’s that they like to play aggressively against the pass, both in the secondary and along the front seven. In spite of the fact that they have a very talented group of both edge and interior rushers, they not only like to bring numbers, they also like to blitz.

By my estimation, the Broncos blitzed on just about half of Ben Roethlisberger’s drop backs. But it only produced one of their three sacks, which came on a five-man rush and included a straight overmatch of the left tackle. The other two sacks came on four-man rushes with no blitzing defender.

By my counting, however, Roethlisberger was able to complete 20 of 28 passes in the face of a blitz for 202 yards with one touchdown. That is half of his completions in the game, for more than half of the team’s total yardage, averaging 7.2 yards per attempt.

On 17 of Denver’s blitzes, they brought at least six pass rushers, though, as you would expect, the passing game faced more mixed success in the face of the added numbers. The game-sealing eight-yard reception to Antonio Brown on third down with 90 seconds to play came against seven rushers, however, so there is that.

Roethlisberger had his greatest struggles when facing six pass rushers, completing seven of 12 passes for 65 yards, but he had an excellent read on when the Broncos brought seven, dropping just four into coverage and able to find the open man. He completed four of five passes facing seven rushers for 48 yards, although that incompletion resulted in an interception.

Denver only rushed with four players or fewer 20 times during the game, but though it produced two sacks, it only drew two incompletions, as Roethlisberger completed 16 of 18 pass attempts for 153 yards. Of course, the plays include those on which penalties occurred, but for the purposes of evaluating Roethlisberger’s performance against the pass rush, the plays remain relevant.

If you were wondering how the Broncos’ secondary had been able to hold up so successfully over the course of the season, part of the answer obviously lies in the talents of their quality cornerbacks and safeties, but another variable in the equation, as shown against Pittsburgh, has been a commitment to playing aggressively in getting after the quarterback.

It should be no surprise, considering that the Broncos lead the league in sacks. After adding three against the Steelers, Denver now has 47 on the year, which is split for a two-way tie with the Patriots. The Chiefs, by the way, are a distant third with 41, while the Steelers are tied with the Panthers or fourth with 40.

The improved play of the offensive line has had a lot to do with explaining why Roethlisberger has been sacked on a career-low four percent of his drop backs, but so, too, has been his ability to commandeer the blitz—even one as good as the Broncos’.