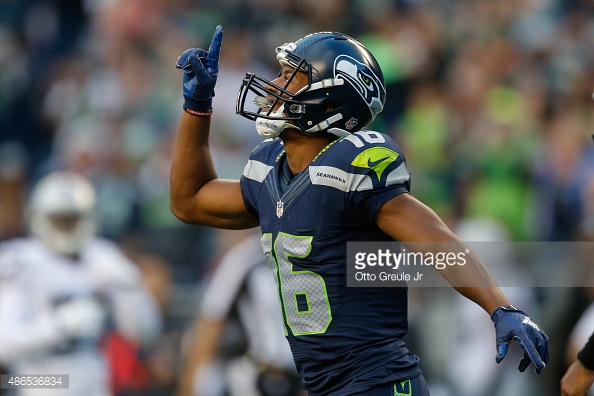 We are still six days away from the Pittsburgh Steelers’ showdown with the Seattle Seahawks. Look for the full, in-depth scouting report from Jon Ledyard and me later in the week but as a way to kick off the week and get back into the football mindset, here are five of the most dangerous Seahawks’ to keep in mind.

This is a list of the most dangerous, not necessarily the best. There are few players that scare me more than the rookie Lockett and in today’s The Terrible Podcast, Dave and I both agreed he was the most dangerous player. He caught two touchdown passes Sunday, becoming the first Seahawks’ rookie to snag two since Joey Galloway in 1995. His efforts in the return game also make him an unquestioned threat with a kick and punt return for a score this season. He was one of the most dynamic players in the draft and has carried that over into Year One in the NFL. The Steelers’ coverage units have been strong but will be tested Sunday.

Bennett is tied for the team lead with 6.5 sacks and looks poised to beat his career high of nine, set in 2012 with the Tampa Bay Buccaneers. Not bad for a 30 year old. He’s a guy who can penetrate the run and collapse the interior against the pass and will have to be accounted for one every play. Getting a strong combination block on him against the run will be important when the Steelers want to run zone. Can’t ask a backside defender to reach him without help. Simply won’t work.

He and Bobby Wagner make an impressive linebacker duo but Wright’s stats have popped more in 2015. He leads the team in tackles, has forced three fumbles, and has added a sack for good measure. He’s also playing over 97% of Seattle’s snaps, proving to be an every-situation type of player. I’m sure Mike Tomlin will bring his name up in tomorrow’s press conference.

Of course, this list wouldn’t be complete without Wilson on here. Some will debate if he’s become too unfocused on football with an eventful off the field life but he still makes plays very, very few players can make. He’s done all that while being incredibly efficient with an underwhelming supporting cast. He’s completed over 67% of his passes, a rare mark for a scrambling QB. Defenses have to cover for 6-7 seconds because of his ability to keep a play alive, and even when you do, he’s bound to take off and rush for a first down or big play. Tough to play man coverage because when you take your eyes off the QB, you’re going to be late in realizing he’s taken off.

Chancellor can do it all. He can thump, cover, make splash plays, and is just an insane athlete for how big he is. He continues to have a fine season, though maybe not up to his standards, with an interception and a forced fumble. He and Earl Thomas will make for a fun matchup pitted against the Steelers’ explosive rushing attack.