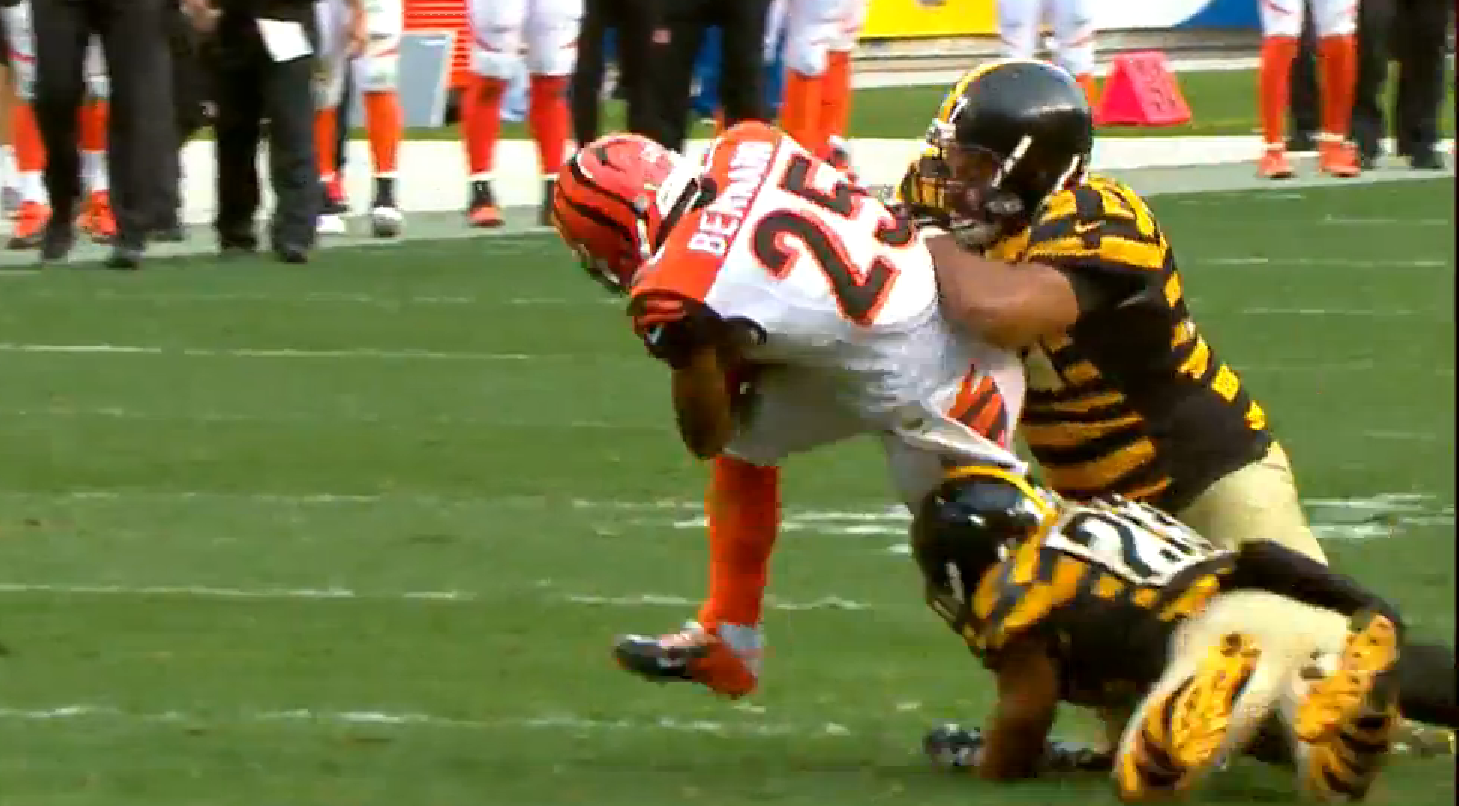 Seventh-year Pittsburgh Steelers safety Mike Mitchell recorded his second interception of the season on Sunday, but he also suffered his first diagnosed concussion as well, which occurred late in the game as he went to make a tackle on a breakaway dump off pass on third and five.

During the course of the tackle attempt, Mitchell, playing the deep safety, lowered his head while his teammate, Cameron Heyward, came up from behind to help bring running back Giovani Bernard from behind. The combined efforts of Bernard moving to the side and Heyward coming over the top conspired to put Mitchell’s head on a path with the running back’s thigh.

The safety spent several moments on the ground, immediately undergoing concussion tests with the medical staff while lying on his back on the Heinz Field turf. While he was helped up by the staff, he walked off under his own power, shaking out his right arm as he did so.

Mitchell missed the last four minutes of the game, during which the Bengals scored 10 unanswered points to secure the 16-10 victory. Following the game, the veteran was placed through the standard concussion protocol, but fortunately he was able to be cleared for action to practice yesterday.

Provided that there are no setbacks from returning to physical activity, he should resume his second season with the Steelers, during which he has solidified himself as an enforcing presence, significantly improving upon his first season with the team last year after signing a lucrative free agent contract.

His ability to return so quickly from suffering a concussion is also rather fortunate for the Steelers, who have been banged up at the back end, already releasing Ross Ventrone after his injury.

Starting safety Will Allen has missed all but eight snaps over the course of the past four games, including the last three starts, after sustaining an ankle injury, during which Robert Golden has ably replaced him.

Allen has only now begun to return to practice, with the possibility of returning, at least to the field, if not the starting lineup, but in the immediate aftermath of the game, it certainly looked like the Steelers would find themselves in a precariously thin position.

After starting the season with five safeties, the Steelers have operated with three healthy safeties for most of the past month. With only Shamarko Thomas left in reserve, who logged the last seven snaps of the game, Pittsburgh was at risk of entering the week with just two safeties.

By the end of the week, the Steelers may be back up to full strength on the back end, with Mitchell responding well from a concussion and Allen getting back to practice. At the very least, Mitchell figures to return to the starting lineup.

Who will be working next to him should be interesting. He and Golden have played well as a pair over the course of the past month, but fall far short of Allen’s experience. At the very least, the Steelers finally have options.