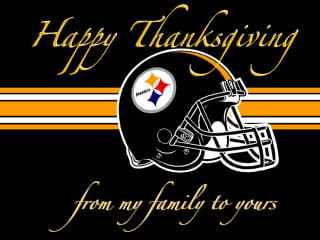 The idea that Pittsburgh Steelers fans have plenty to be grateful for this Thanksgiving may seem erroneous to many of you given the injuries to Le’Veon Bell, Maurkice Pouncey, Kelvin Beachum, and even Ben Roethlisberger for a few games, but I’m here to suggest the opposite. Sure, there have certainly been several aspects of the season that Pittsburgh gladly would have done without, but, as Mike Tomlin implied in his Tuesday presser, the Steelers situation could be much worse.

Steelers fans should be quite thankful for Roethlisberger’s healing powers, as the quarterback has somehow bounced back twice from what appeared to be season-ending injuries. Would Pittsburgh have emerged victorious from their Week 10 matchup against the Cleveland Browns if Mike Vick had been forced into the starting lineup in place of the injured Landry Jones instead of Roethlisberger? Doubtful. Can either Jones or Vick carry the Steelers to a win in a shootout against the Oakland Raiders? That’s 4-6 kids, at least. Whatever is in Ben’s milk, let’s thank God for it today.

But in the same breath, one man I’m sure we all would never have believed we’d be thankful for on this special day is Landry Freaking Jones. Perhaps the most-maligned third string quarterback of all time, Jones was vaulted into action against the fearsome Arizona Cardinals during Week 6, and responded by tossing two touchdowns to Martavis Bryant, including the 88-yard, game-sealing score with two minutes left in the contest. Jones couldn’t defeat Kansas City, but again starred in relief against Oakland when he hit Antonio Brown for a 57-yard catch-and-run to set up Chris Boswell’s game-winning field goal with two ticks on the clock. Who would have thought that the man we all wanted to cut in training camp, who could barely get through one practice without tossing an interception, would be the one to help save Pittsburgh’s season? Twice even? Remarkable.

Speaking of Boswell, remember that Josh Scobee dude who would highlight the antithesis of this list? Just when it appeared the Steelers carousel of kickers would dismantle their season after Scobee almost single-handedly lost the Ravens game in Week 4, in steps Boswell, a man of whom no tale is hyperbole. Boswell is only the second kicker from Rice to ever play in the NFL, and the only one to appear in more than three games. Think The Boz’s 14-15 performance on field goals this season, including a big-time 4-4 showing against the Cardinals. has helped save the 2015 campaign?

There’s so many to thank honestly. Thanks Mike Mitchell’s groin doctors. Thanks Mike Tomlin for believing in Rosey Nix and giving the fanbase a lunch-paily, passionate, workaholic, pads-popping, Pittsburghy kinda guy to root for. Thanks Mike Vick for taking quarterbacking back to the Stone Age, before football was even invented, and making Landry look like a Pro Bowler in the process. Thanks Dri Archer for never fumbling a kickoff (that I can recall), sometimes ya never know what ya have until its gone, or until you’ve got Jacoby Jones instead.

Thanks Darrius Heyward-Bey for somehow finally finding a way to recognize your draft potential for the first five games of the season, when the team desperately needed you in Martavis Bryant’s absence. I know since then your hands and catching technique have returned to their previously eye-blinding ways, but I don’t even care, you beautiful draft bust, you. You’ll always be in our hearts over Limas Sweed.

Thank you DeAngelo Williams, for being the consummate teammate and not acting like an arrogant piece of trash when your number wasn’t called instead of Bell’s (looking at you LeGarrette Blount). You’ve reminded every backup in the league how important it is to accept your role, wait patiently, and be ready to shine when the time comes. We’re especially grateful for Grade-A people in this city, and you’ve certainly proven you’re one of the good guys in the league.

Thanks Jesse James for the constant barrage of fans that still think it is original to make outlaw jokes when referencing your name. Thanks Vince Williams for threatening to fight anyone who steps to, well, anyone. Glad you’re on our side. Thanks Buffalo for not wanting Ross Cockrell, he’s worked out nicely here. Thanks Brandon Boykin, for staying classy in the midst of a tough situation. You may just get your chance yet.

Thanks Cam Thomas, for making the tiniest of strides in your game and only spending a quarter of your snaps on the ground instead of half (kidding, kidding). Thanks for the memories and all the good times Brad Wing and Dri Archer. Thanks Bud Dupree for not wigging out on everyone in a game and forcing Tomlin to throw you out of the club….again.

Most of all though, thank you Alejandro Villanueva, for your service to this country, and your brave efforts to save your comrades under fire. Regardless of whatever is said about what you do on the field, you’re more of a man and a hero than any of us will ever dream of being. The respect we have for you as a person and as a soldier can never be overstated.

Been a fun season so far, with a lot to be thankful for. Sometimes as football fans/analysts, and as people, we spend far too much time looking for the negative, rather than keeping our eyes pealed for the positive. There will come a time when both sides must be evaluated properly, but today, I’m taking the glass-half-full approach, to life and to the Steelers.

All of us at Steelers Depot are especially thankful for all of you wonderful, die-hard readers. Your commitment and passion for this site has allowed it to become more successful than we ever could have dreamed. We might get rowdy and worked up from time to time, but we love and are grateful for every single one of you. Happy Thanksgiving to you all, and be sure to enjoy a little “black butter” with your meals today.