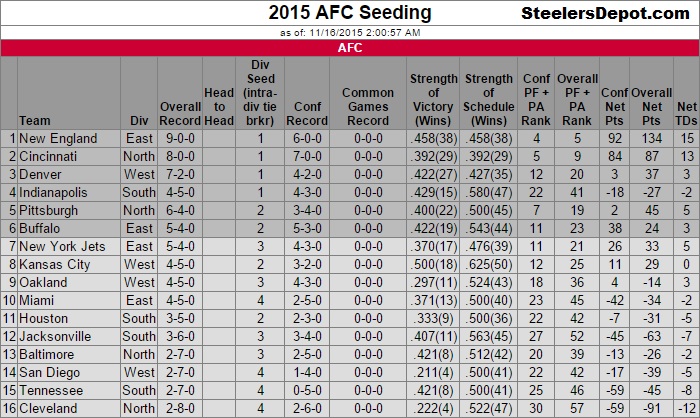 There’s one more game left to be played in Week 10 of the NFL season but it won’t affect where the Pittsburgh Steelers rank in the AFC as they head off into their much-needed bye.

Thanks to the Steelers 30-9 win over the Cleveland Browns Sunday at Heinz Field, the 6-4 Steelers are now the No. 5 seed in the AFC.

The Steelers were afforded the opportunity to jump up one spot this week thanks to the Buffalo Bills beating the New York Jets Thursday night. The Bills, however, can jump the Steelers in Week 11 if they upset the undefeated New England Patriots next Monday night as they will have the better conference record (5-3) of the two teams.

With the Oakland Raiders losing Sunday to the Minnesota Vikings, the Steelers effectively now have a three game lead over them in the win column thanks to their win over them in Week 9. The Raiders, now losers of two straight, will play the Detroit Lions next Sunday.

In other Sunday AFC North action, the Baltimore Ravens lost to the Jacksonville Jaguars as time expired thanks to a long field goal that followed a facmask penalty on a fourth down sack by Elvis Dumervil. The Ravens are now 2-7 on the season with one of those wins coming back in Week 4 against the Steelers.

After their bye week, the Steelers will play the Seattle Seahawks on the road.