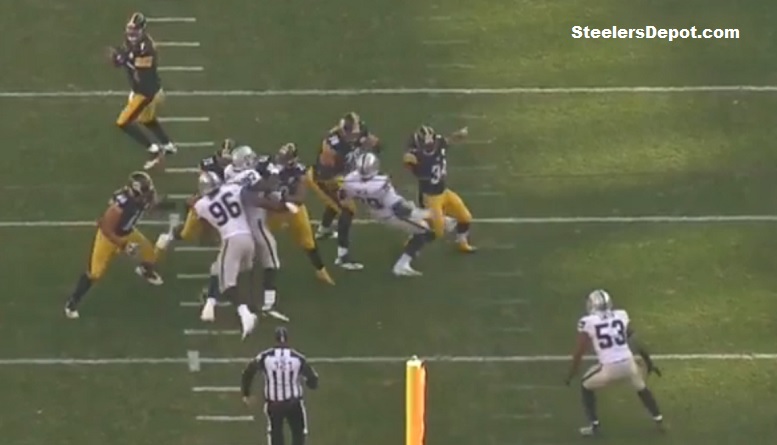 At 32 years of age, Pittsburgh Steelers veteran running back DeAngelo Williams is still getting it done whenever his number is called and that really showed this past Sunday in his great all-around performance in the win over the Oakland Raiders.

Tuesday, during his weekly press conference, Steelers head coach Mike Tomlin was asked about Williams’s ability to hold off Father Time much longer than other players who play the physical demanding position of running back.

“It’s a blessing,” said Tomlin. “I’m sure it’s also what he does and how he works. Like I was talking earlier in reference to his personality, he enjoys the drudgery. Deangelo loves to lift and train.”

Tomlin went on to say that Williams is often spotted on off days and after practice doing the little things to keep himself in top physical condition and he made sure to praise him of that.

“I just think that that general attitude regarding the things that come with professional football enables him to endure and enables him to be available to us and whoever he’s been with,” said Tomlin of Williams. “I think that there’s a lot in that. Much like James Harrison, who happens to be a football junkie, I think that you could say the same about DeAngelo and probably it produces the same results in terms of longevity and availability.”

Not only did Williams register 225 yards of total offense and two touchdowns on Sunday against the Raiders, he was also solid in pass protection. In fact, right before the end of the first half, he decleated Raiders linebacker Aldon Smith with a chip block on his way out of the backfield. Tomlin was asked specifically about that play on Tuesday.

“He takes a great deal of pride in all aspects of his play whether he’s got the ball or not,” said Tomlin. “He really wants to be an integral part of the passing game because he recognizes how productive Le’Veon [Bell] has been in that area. He was able to make a few catches, significant catches, and some big plays, but blocking is just part of it. He’s got the desire to be a complete player, no doubt.”

The Steelers are hoping that Williams can again be a complete player for them this coming Sunday in their home game against the Cleveland Browns as he’s currently dealing with some inflammation in the middle of one of his feet. On Tuesday, Tomlin said he expects Williams to be limited in practice early on the week as a result of that. He was later asked if he’s optimistic about Williams’s foot issue only being an early-week one as opposed to something that might linger.

“I don’t have level of optimism positively or negatively,” said Tomlin. “I just go by the information received and I’ll know more obviously tomorrow once we take the field, if he takes the field or not, or to what level or degree.”

Williams has already registered 480 rushing yards and five touchdowns so far this season in addition to catching 12 passes for another 122 yards. He signed with the Steelers in March following his release from the Carolina Panthers. While he has failed to play in 27 regular season games so far during his long career, 20 of those missed games came in two seasons.