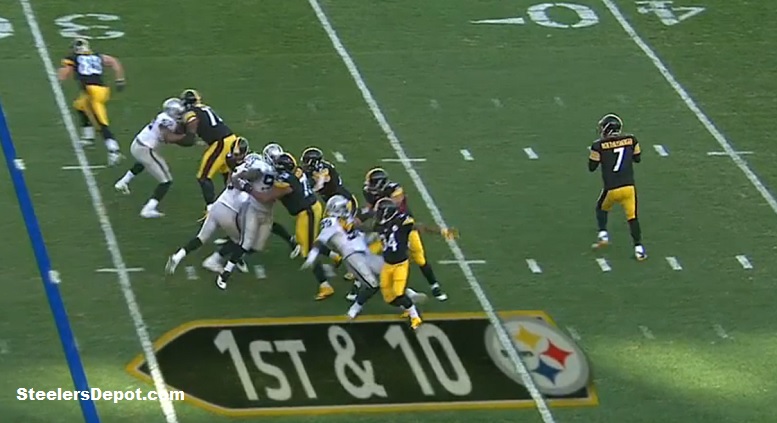 While most of the talk on this Monday morning will deservingly be about the performance that Pittsburgh Steelers wide receiver Antonio Brown put on Sunday in the win over the Oakland Raiders, don’t forget to give some love to running back DeAngelo Williams as well.

Williams, who is now the team’s starting running back for the remainder of the season with Le’Veon Bell out for the year, erupted for 255 total yards on Sunday against the Raiders with 170 of them coming on the ground.

As you will see in the highlights below, Williams really showed why he is a solid all-around back and why the Steelers are in good hands with him moving forward.

Williams’s first touch in the game Sunday was a pass from quarterback Ben Roethlisberger out of the backfield early in the game. Sure, it was a busted coverage, but it’s not his fault that he executed his own assignment flawlessly on the play that picked up 33 yards. He finished the game with two catches for 55 yards.

Need a short-yard, goal-line back? Williams can do that job as well. Against the Raiders, his first of two scores featured him reading his blocks and a Raiders linebacker on his way to a 3-yard score. What a superb cutback run.

Need a two-point conversion option? Williams can do that job as well and he showed it following his aforementioned first score of the game.

Need a back that isn’t afraid to block or chip on his way out of the backfield? If so, Williams is your man. Watch below as plants Raiders linebacker Aldon Smith on his ass with a physical chip before heading out on his route.

Need a back who can be patient and read his blocks on the Steelers counter play? Williams can do that as well and he showed that ability against the Raiders.

While Williams might not never put up another statistical performance like he did on Sunday, it’s clear that the 32-year-old still has a full-rounded skill set. He really put on a show Sunday against the Raiders and it was fun to watch.