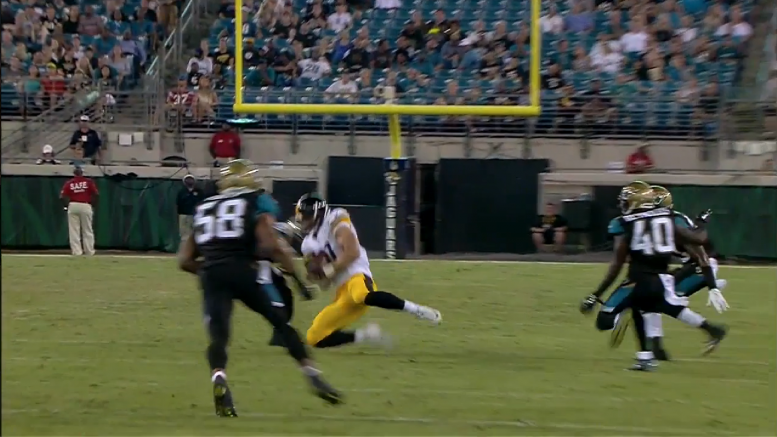 Veteran Pittsburgh Steelers tight end Matt Spaeth will be missing his second game of the 2015 season, which means, of course, that rookie tight end Jesse James will be…inactive.

Yes, if you look at the depth chart, the fifth-round draft pick is technically listed as the third-team tight end. And yes, throughout the years, the Steelers have always preferred to dress three tight ends.

If you don’t include Will Johnson in that category, then they haven’t been doing that at all. But the reality is that, in spite of the fact that he is listed as a fullback officially, Johnson has essentially been a tight end for the past couple of years.

The Steelers seem pretty set on giving James a redshirt season to develop this year after the true junior came out of college early. He is the youngest player on the team—surely among the youngest in the league—having only turned 21 in June.

In spite of his size—listed at 6’7”, 261 on the team’s website—the young James was drafted presuming that he would be a bit of a project in terms of developing his game, as well as growing into his frame.

What about next year, though? Will there be a place for both James and Johnson on next year’s roster, with first-year fullback Roosevelt Nix having seemingly established himself in that role, and even demonstrating a willingness to play in-line as a tight end if necessary?

Because of the unusual circumstances at the top of the depth chart, the likely answer is that yes, there will be room, provided that roster spots are not in immediate demand at other positions.

The unusual circumstance is the fact that both of the Steelers’ top two tight ends, Heath Miller and Spaeth, are on the wrong side of 30, with Miller having just turned 33 and Spaeth soon to turn 32 this month.

Both have just one year remaining on their contract after this season, so the Steelers are in the process of preparing for the next stage of the tight end position, the post-Miller era, in which they will have to get by without their workhorse of the past decade.

Even with James and Johnson, they will still be low on tight ends once Miller and Spaeth are gone, so the position will still be a draft target. The Steelers looked at it heavily this offseason and were likely close to pulling the trigger on one in the second round, had they been given the opportunity.

So just because James can’t get a hat now doesn’t mean necessarily that it should be taken as a bad sign. Johnson, a fourth-year veteran, has already been struggling to even get snaps, especially in an offense that so frequently relies upon three-receiver sets.

Of course, all of this will become moot if the Steelers surprise and end up giving James a helmet for today’s game, though that seems unlikely, as there have been other opportunities due to injuries to give him the chance to dress earlier in the year.