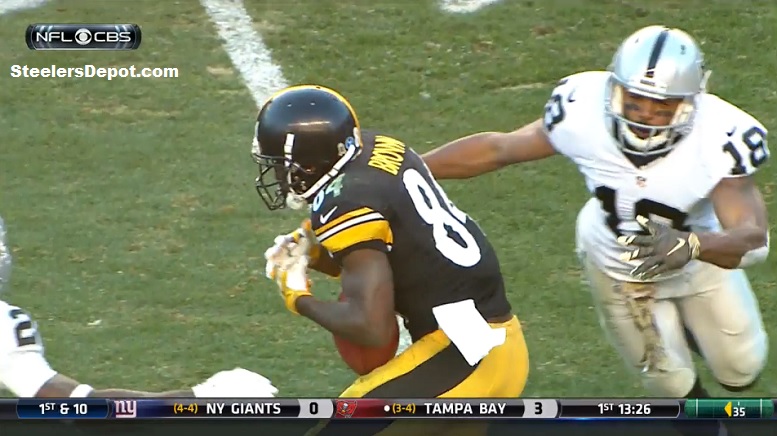 The next topic I will be delving into is another one that has produced strong reactions, though that is not the purpose of covering it; it is simply one of the most pertinent and practical areas of the team that they can legitimately be debating during the bye week.

While it seems that there will not be an immediate benching on the horizon, and a roster move is even more unlikely, it would be in the organization’s favor to at least give some thought to what is to be done in the punt return game—more specifically, who will be back there Sunday evening to field the first punt.

Since the Steelers claimed Jacoby Jones off waivers, he has been back there to field all but one punt. As we later found out, Antonio Brown, the team’s usual punt returner for the better part of the past six years, requested to return that one, which he ultimately fumbled and lost.

Every other punt was fielded by Jones, though he only attempted to return two—one for a short loss, the other for a five-yard gain. A third punt was ‘returned’ only by technicality for zero yards as he muffed a punt for which he called a fair catch and was forced to recover.

The results of Jones in the return game are clear and paint a stark picture of futility, albeit within a very small sample size. As mentioned, he has only had the opportunity to attempt to return two punts thus far.

The ninth-year veteran certainly has the resume on his size when it comes to productivity, both in terms of yards per return, as well as the scores, but his most immediate recent history raises concerns. It is also significant that of his 14 career fumbles on returns, 13 have come from returning punts.

Of course, it’s much easier to return a kickoff cleanly than it is to return a punt, so that should be no surprise. After all, Brown himself has seven fumbles on punt returns—two this year—and his fumbles per punt return over the course of his career is slightly less favorable than Jones’.

Perhaps the decision will not be immediate, but it would seem likely that they are weighing the contingencies of what to do. If they put Jones back there again for the next game, for example, they may use that performance to evaluate whether or not to keep him there—or even on the roster, depending on his struggles.