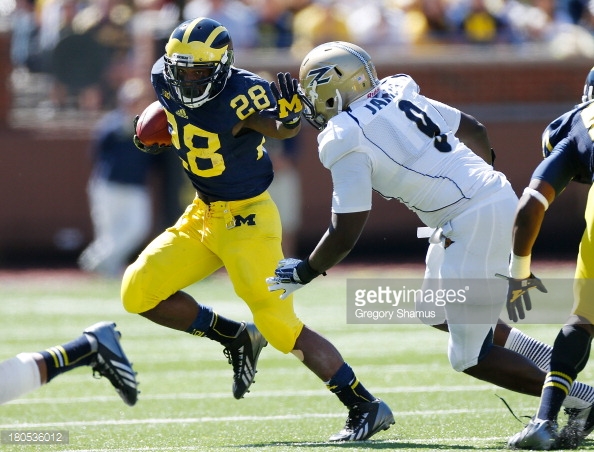 Yesterday afternoon, the Pittsburgh Steelers announced an unexpected but not altogether unsurprising roster move as the team gets closer to resuming actual football activity. The move saw the promotion of running back Fitzgerald Toussaint from the practice squad, ousting Isaiah Pead from the 53-man roster in the process.

Pead was a second-round draft pick of the Rams in 2012, but has done little since. He has a total of 19 rushes to his name for 78 yards, and already has a torn ACL and a suspension for a substance abuse violation under his belt.

The 5’10”, 200-pound back was a pre-draft target of the Steelers that year, but they were not looking for a running back that high at the time—that would come a year later with the drafting of Le’Veon Bell in the second round.

The team signed Pead after Bell was placed on injured reserve with a torn ACL, but despite being on the team for two games, failed to dress heading into the bye week. The former second-round pick had never lived up to his billing even during the short time he was on the field, as should be obvious by his time spent on the open market this season.

Head coach Mike Tomlin named him and Jordan Todman as two players that needed to be given work during the down time to evaluate them as some other veteran players got time off. Evidently that evaluation was conclusive enough to warrant the roster move.

Part of the logic no doubt pertains to knowledge of the offense, of course. Pead had only been on the team for less than a month at this point, whereas Toussaint had been on the practice squad since early September.

Toussaint was originally signed by the Baltimore Ravens last season as a rookie undrafted free agent out of Michigan, where he was a three-year starter at running back, though his 2012 season ended with a broken leg. He was also arrested during the summer of 2012 for a DUI.

The rookie had a successful preseason for the Ravens and was signed to the practice squad initially, but was quickly promoted prior to the first game after Lorenzo Taliaferro was put on injured reserve.

He bounced on and off the practice squad, finally called up for a final time for the final three regular season games, where he rushed for 12 yards on two carries, with a long of 12 yards. He also had two carries against the Patriots in the divisional round for five yards.

While Toussaint was never expected to make the Ravens’ 53-man roster with the re-signing of Justin Forsett, the return of Taliaferro, and the drafting of Buck Allen, he was brought back to compete for a roster spot, or a spot on the practice squad.

With Forsett recently being lost for the season, it is possible that the Ravens were interested in signing the second-year player off of the Steelers’ practice squad, which could have also factored in the decision to promote him and cut Pead, with the bonus effect of hurting a division rival.