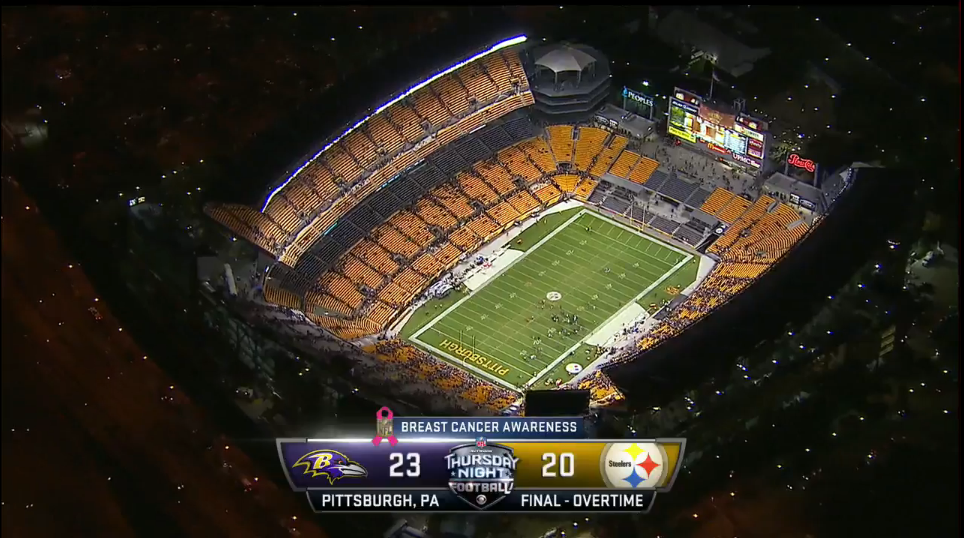 If you’re a Pittsburgh Steelers fan currently looking up the dictionary definition of the word “heartbreaker”, a description of the team’s 23-20 overtime loss to the Baltimore Ravens will no doubt accompany it.

Despite countless opportunities to seal a victory over their hated rivals, the Steelers opted for a medley of choke performances, highlighted by Josh Scobee, Michael Vick, and the befuddling play calls of Todd Haley.

With the absence of Ben Roethlisberger looming large on Thursday night, Vick helped give the Steelers an early 3-0 lead on their second possession of the game, finding Markus Wheaton for 18 yards to help set up the boot. Baltimore would answer on their next drive, when Michael Campanaro took an end around into the end zone after Arthur Moats and Will Allen whiffed on the tackle late in the first quarter.

A quick three-and-out by the Steelers offense gave the ball back to Baltimore, who looked like they were ready to extend their lead when Ross Cockrell stepped in front of a Joe Flacco pass and returned it 37 yards to the Ravens 36. Pittsburgh couldn’t capitalize, but the turnover likely kept points off the board for the Ravens.

Pittsburgh would eventually find pay dirt when Le’Veon Bell reversed field and picked up a Vick block on an 11-yard jaunt to the end zone to give the Steelers a 10-7 lead. Sean Spence sacked Joe Flacco on the Ravens ensuing drive to help force a quick three-and-out, and a personal foul penalty on the punt helped move Pittsburgh into range for Scobee to boot a 36-yard try through the uprights, making it 13-7 at halftime.

On the first play from scrimmage in the second half, Cam Heyward chased down Flacco and swatted the ball out of his hand as the quarterback attempt to scramble down the left sideline. Cockrell alertly scooped up the bouncing ball, toe-tapping both feet in bounds to complete the recovery.

Vick capitalized on the short field by finding Darrius Heyward-Bey for a nine-yard touchdown pass to give Pittsburgh a 20-7 lead with just over ten minutes left in the third quarter. Flacco responded with a six-play, 80-yard drive, capped by a touchdown pass to Kamar Aiken in the back left corner of the end zone.

Vick was sacked twice on the ensuing Pittsburgh possession, before a poor Jordan Berry punt and a nice return set Baltimore up at the Steelers 28. The Ravens could manage only eight yards in three plays, before attempting a fake field goal on 4th-and-three that Spence sniffed out to drop the ball carrier for a three yard loss.

The Steelers offense could not move the ball however, putting the defense back on the field with a quick three-and-out. Baltimore responded with a lengthy, albeit short, drive of 38 yards on 12 plays, capped by Justin Tucker’s 40-yard field goal to cut the score to 20-17.

Baltimore got the ball back with 7:31 left in the game, but Flacco was stuffed for no gain on 4th-and-one from the Steelers 43-yard line with 4:20 left. Bell raced for gains of 21 and six yards to set up Scobee for a 49-yard attempt with 2:29 remaining, but the woebegone kicker missed it wide left.

In a drive that everyone thought would be the Ravens last gasp, James Harrison sacked Flacco for a ten-yard loss on 4th-and-10, giving Pittsburgh back the ball at the Ravens 29-yard line with 2:04 left. The Steelers could gain just six yards on three plays, but still remained well within range for Scobee to kick a 41-yard field goal to put Pittsburgh up six points with just over a minute left and no timeouts for Baltimore. Game over right?

Sure, until Scobee missed the kick wide left again, giving the Ravens another desperation drive. This time Flacco managed to get them into range for Tucker to hit a 42-yard field goal and send the game into overtime.

Pittsburgh opted to receive the ball first in the extra period, and Bell’s 22 yard rumble down the left sideline to the Ravens 47 jump-started the attempted game-winning drive. Two Bell carries netted eight yards, until a Vick incompletion (very lucky the pass wasn’t intercepted) forced the Steelers into a 4th-and-two from the Ravens 39-yard line. With Scobee not an option given his struggles, a punt seemed like the obvious decision, but Pittsburgh decided to go for it. That decision was strange enough as it is given how the Pittsburgh defense was playing, but Haley’s play call for a Vick sweep to the left on a quarterback keeper was laughably stopped for no gain, giving Baltimore back the ball with strong field position.

Still the Pittsburgh defense refused to wilt, as Mike Mitchell broke up a deep pass to Aiken on 3rd-and-ten, forcing Baltimore to punt. Antonio Brown raced to the Pittsburgh 41-yard line on a nifty return, before catching a 17-yard pass from Vick to move the Steelers to the Ravens 42. Facing a 4th-and-one from the Ravens 33, Tomlin opted to go for it rather than have Scobee attempt a 50-yarder for the win. Run Bell right, who is never stopped in the backfield and always falls forward?

Nope, Vick dropped back and proceeded to overthrow an open Brown in the flat for what would have been the first down, giving the Ravens offense the last gasp they needed. Flacco took eight plays to march his team into position for Tucker’s game-winning 52-yard boot, escaping Heinz Field with a 23-20 victory.

Pittsburgh will have 11 days to meditate on how epically they blew a game that was in their hands multiple times, gift-wrapped by a defense that refused to give in all night. Coaching and kicking cost the team a 3-1 start, as the 2-2 Steelers will now prepare for their upcoming Monday night matchup against the San Diego Chargers on October 12th.