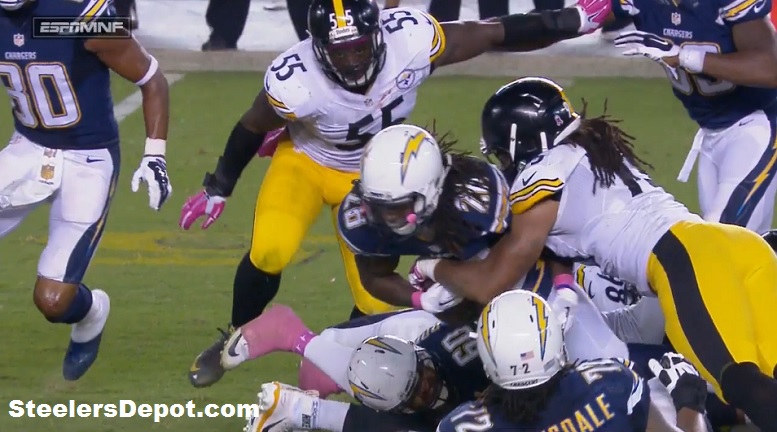 Monday night against the San Diego Chargers, Pittsburgh Steelers third-year linebacker Jarvis Jones had perhaps his best game as a professional as he registered a sack, two hurries, a forced fumble, and five total tackles in the 37 snaps that he played. On Thursday, Steelers defensive coordinator Keith Butler was asked during his weekly session with the media if he thought Jones turned the corner in that game.

“He played a good football game,” said Butler of Jones. “Turing a corner for me is playing three in a row. Then, we can see something. I think he did well last week. I think he’s starting to feel comfortable in the system. I said this the last two years, I know he’s the No. 1 draft choice, but, anytime you try to do something and it’s fast and physical, it takes a while to learn that sometimes. When you feel comfortable enough to the point it’s second nature to you, it becomes easier. The game slows down a little bit. Hopefully, that’s starting to happen for him.”

While Jones did have a good game against the Chargers, it is worth pointing out that a lot of his snaps came against Joe Barksdale, who was forced to switch over to the left tackle spot from the right tackle spot after starter Chris Hairston left the game after just 17 snaps with an injury. Hairston, by the way, was starting in place of King Dunlap, who missed the game with an injury. By the way, Jones’ sack Monday night included him stunting to the inside and pushing center Trevor Robinson back into the lap of quarterback Philip Rivers.

On Sunday, Jones will attempt to show Butler that he can have solid back-to-back games when the Steelers host the 4-1 Arizona Cardinals at Heinz Field. This time, however, the Steelers former first round draft pick out of Georgia will square-off against Cardinals left tackle Jared Veldheer, who might very well be the most underrated player currently in the league at his position.

Veldheer has only allowed one sack, one quarterback hit and three hurries so far this season in the Cardinals first five games. His worst game of the five came a few weeks ago against the St. Louis Rams and specifically against defensive end Robert Quinn, one of the league’s top pass-rushers.

Pass rushing won’t be the only thing that Jones will be doing on Sunday, however, as he’ll also be expected to help shut down the Cardinals league-leading running game. Their offense has averaged 4.96 yards per rush so far this season and an amazing 6.72 yards per carry on runs to the left side of the center.

In summation, Jones certainly has his work cut out for him this coming Sunday and hopefully come Monday morning we’re writing about him looking ahead to him potentially playing third good game in a row.