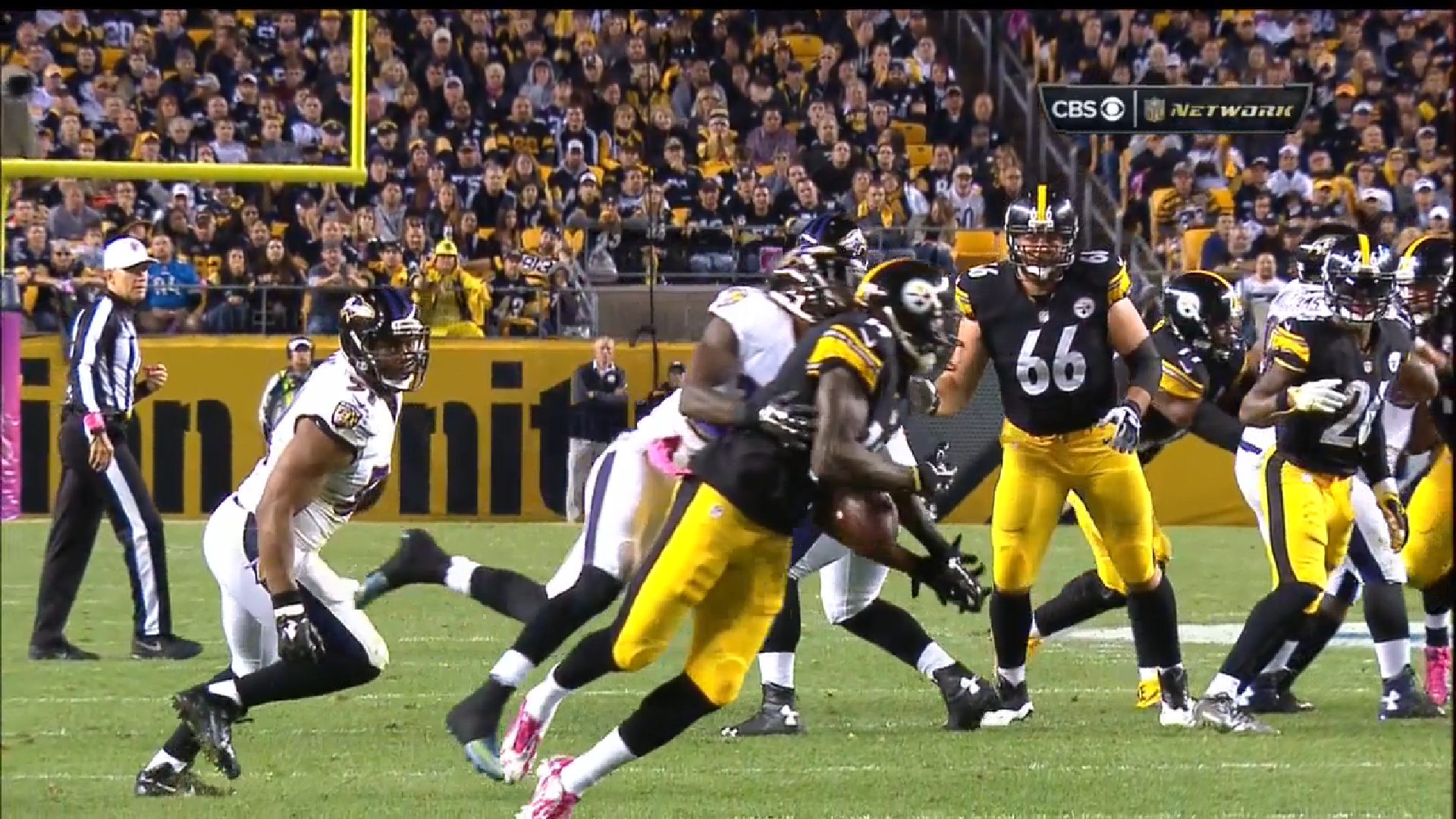 Depending on the health of Pittsburgh Steelers wide receiver Markus Wheaton a week from tomorrow, it may be a while before rookie wide receiver Sammie Coates sees the field again, so it’s a good thing that he got an opportunity to play on Thursday night just to get the taste of game day in the NFL, in prime time no less.

Wheaton was injured 17 offensive plays into the game for himself, on the first play of the Steelers’ penultimate drive of the second quarter. The play was presumably designed to be a pass to him, but the Ravens’ Courtney Upshaw was all over him, taking him out of the play.

Wheaton then became the blocker, impeding Upshaw from getting to Michael Vick, who scrambled for a 10-yard gain, but the third-year receiver injured his shoulder in the process and did not return to the game.

After he left, Coates was immediately inserted on the right of the formation outside the numbers, and Vick found him for an 11-yard reception, the first of his career. He ultimately played about 30 snaps in the game with the lone reception.

Vick targeted the rookie late in a critical situation on third and five with 2:32 to play from the 31-yard line. A first down here would have been enormous, but the pass bounced off his chest and through his arms, onto the Heinz Field grass.

He argued, perhaps fairly, that there was some contact before the reception attempt, but that does not excuse the inability to recover the ball in this situation.

Coates was kept as essentially the fifth wide receiver for the first two weeks of the season, as rookie undrafted free agent quarterback-turned-wide-receiver Tyler Murphy played ahead of him, catching a 16-yard pass on fourth down late in the Steelers’ opening day loss.

Murphy did not see any playing time the following week, however, and when the Steelers activated Le’Veon Bell, who was returning from suspension, it was he who was released to make room, though he was later re-signed to the practice squad.

Soon, the Steelers will have to make room on the roster for the receiver of wide receiver Martavis Bryant, and while that will not be Coates, it does figure to mean that the rookie will be back on the sideline without a helmet with Bryant back in the lineup.

Of course, should Wheaton have to sit out, then Coates would still be the fourth wide receiver, and may see a few snaps per game as a result, though it doesn’t appear that the third-year receiver’s injury was anything to be concerned about at the time, pending a further update.

While the rookie was able to make a few plays for himself during the preseason that showed off why he was drafted in the third round, he also showed the same skill set that explained why he was not drafted in the first, dropping a number of balls and running inconsistent routes.

The Steelers were down to four wide receivers the last two weeks, which got him a hat for a couple of games, but with Bryant back, he figures to be a spectator once again.