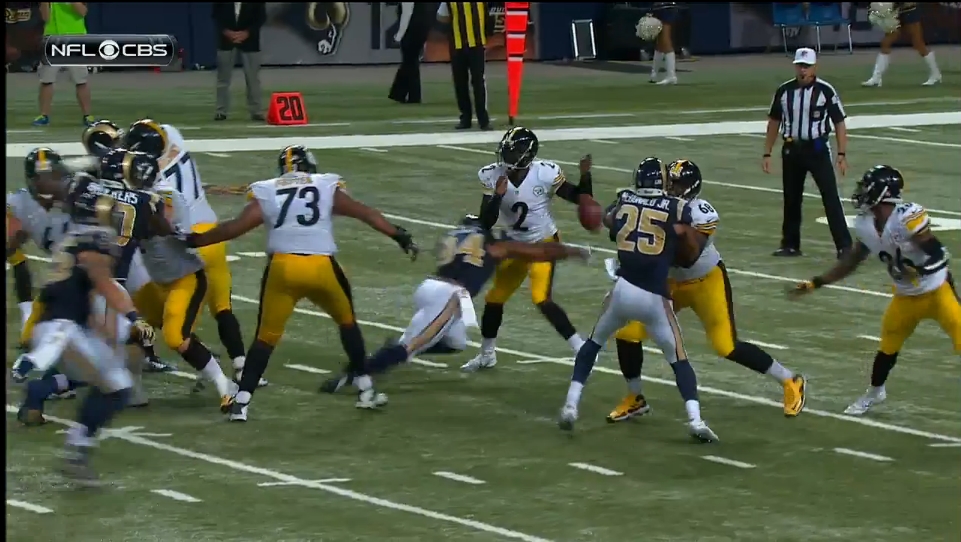 We had last week off from the Pittsburgh Steelers’ sack breakdown. But the St. Louis Rams kept us plenty busy this week with four forced on Sunday.

1. 1st and 10, :54 2nd. 11 personnel. Steelers keep seven into block versus a six man rush. Basically a max protect against a blitz-heavy pre-snap look with eight possible defenders. The Rams do only rush that six, meaning the Steelers are “safe” and there is no need for a hot read. 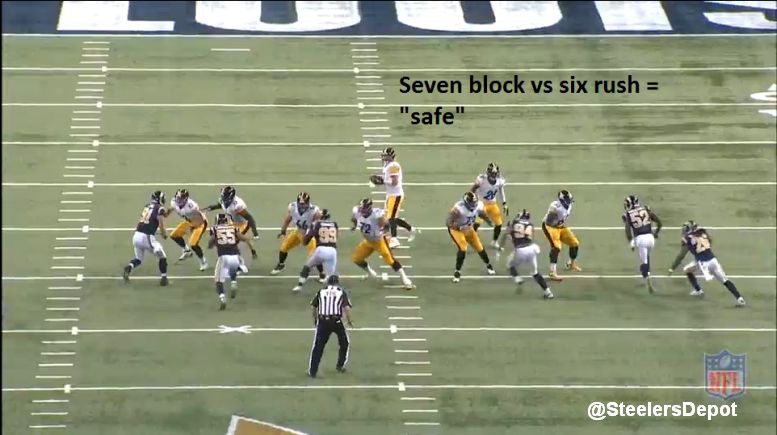 Steelers actually have no issue identifying and picking up defenders. There’s no unblocked rushers and that’s a great place to start with any protection. Now it just becomes about winning your individual matchup. Unfortunately, Kelvin Beachum fails to do that here. Linebacker Alec Ogletree bull rushes him, getting into his frame. Beachum fails to create space between him and the defender. That’s a crucial element of pass blocking – just check out Heath Miller doing that to Chris Long on the other side. 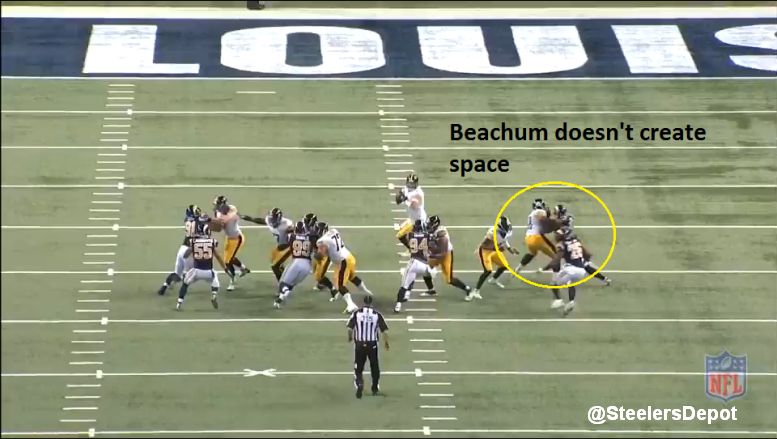 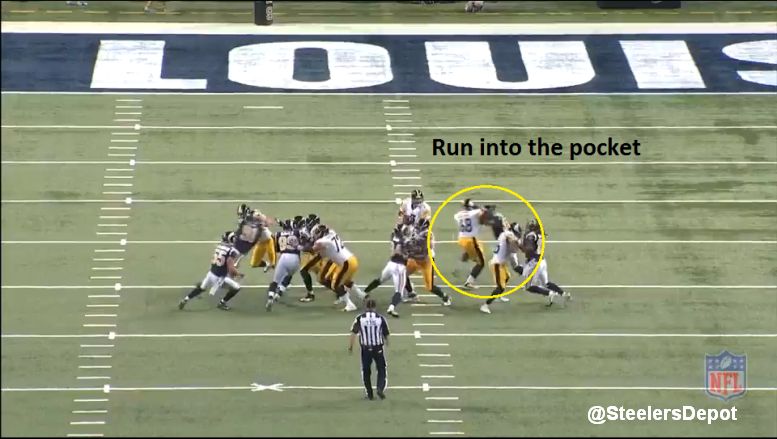 Without space, you can’t get your arms extended. You don’t have power and you’re put on skates. That’s what happens to Beachum and he gets taken into the pocket while Ogletree sheds and sacks Ben Roethlisberger.

There’s no chance for Ben to do anything here, either. It’s a three vertical concept and there isn’t enough time for the routes to develop.

2. 1st and 10, 6:18 3rd. 11 personnel. Five blocking against a five man rush. Aaron Donald is lined up to Cody Wallace’s outside shoulder pre-snap but hops inside off the ball. Wallace is forced to try and mirror but simply lacks the lateral quickness and plays it with poor technique – a dubious combination. 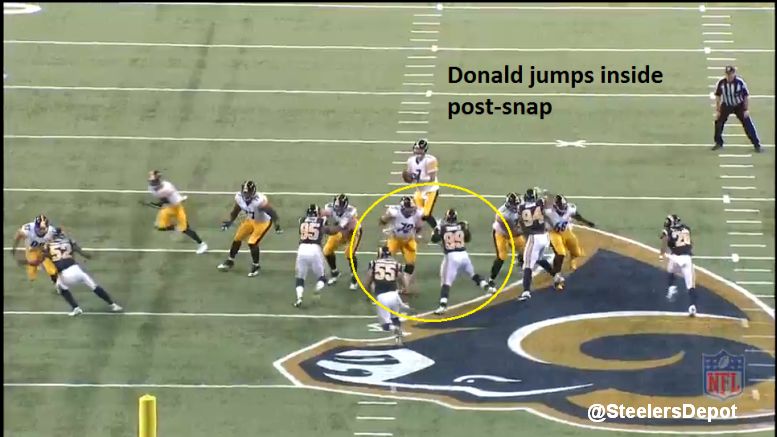 He doesn’t slide to the midpoint of the defender but desperately tries to lunge into Donald, sapping himself of all power and making him an easy target to run through. Donald predictably wins cleanly to bring Ben down. 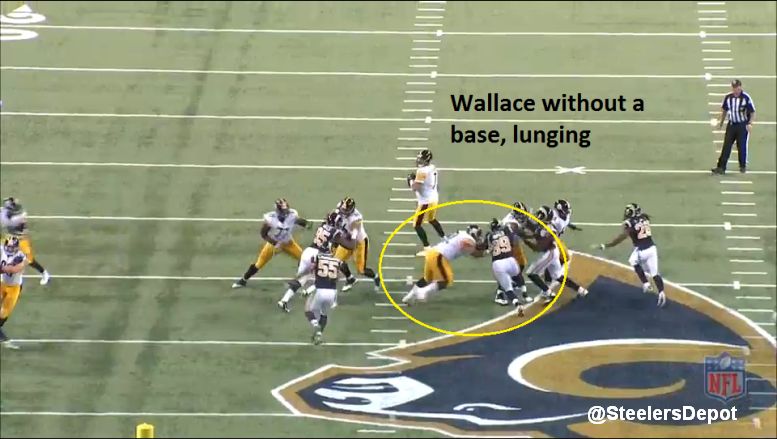 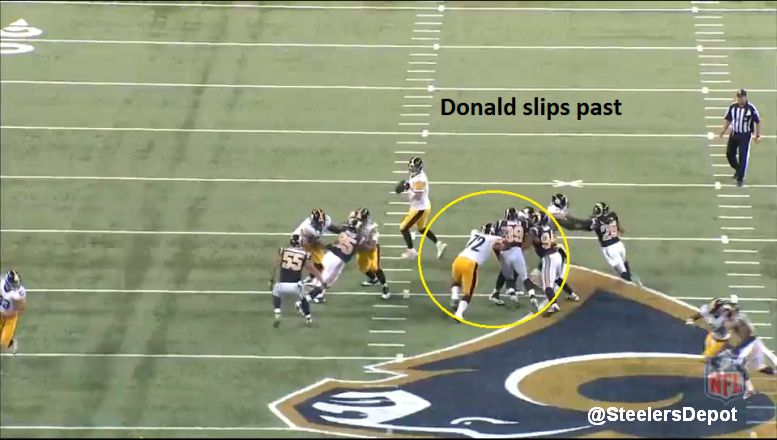 This is exactly where you miss having Maurkice Pouncey. We laud Wallace for being the gritty guy who is a technician. He is gritty but in pass protection, a sub-par technician.

3. 2nd and 18, 5:35 3rd. 11 personnel. Five to block a five man rush. This is the Roethlisberger injury. I can tell you what happened on this play, but I struggle to tell you what I think should’ve happened.

It’s five on five but Mark Barron blitzes in as an unblocked defender off the defense’s right side. You don’t like to see free rushers when you have even numbers. Barron trips and falls into Roethlisberger, knocking him out of the game and at least the next month. 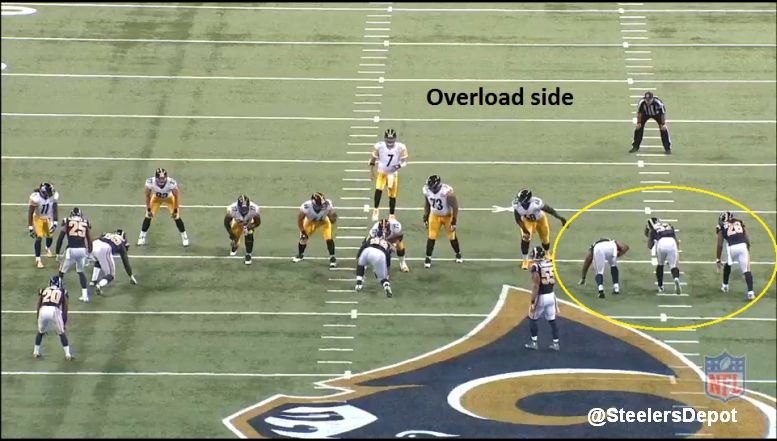 I struggle to determine where the blame should be assigned. Beachum and Foster are asked to defend three players, an impossible task so it’s unfair to blame either of them. They take the most likely and biggest pass rushing threats. If anything, they did their job just fine. 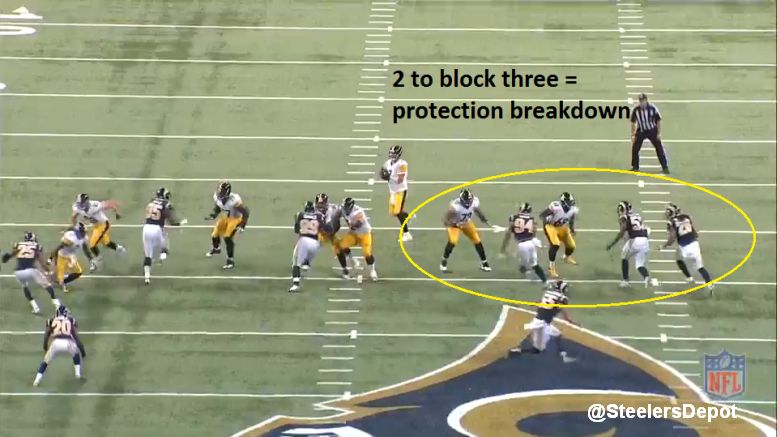 Roethlisberger doesn’t check that side off the snap. Meaning, I wouldn’t think Roethlisberger is responsible for the safety, throwing hot if Barron blitzes.

Which leaves us with Cody Wallace. Is this supposed to be a slide protection to the left, enabling the Steelers to pick up the overload side while David DeCastro is responsible for Donald and Marcus Gilbert the RT? DeCastro does seem to slide that way off the ball but to counter that, it’s not surprising considering there was no one else in his gap. 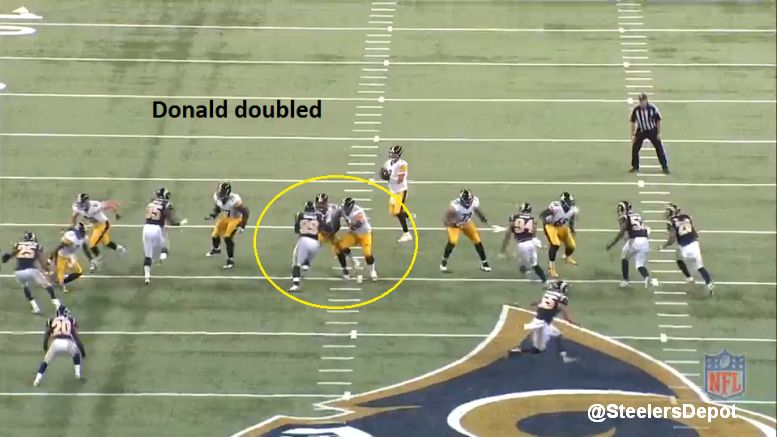 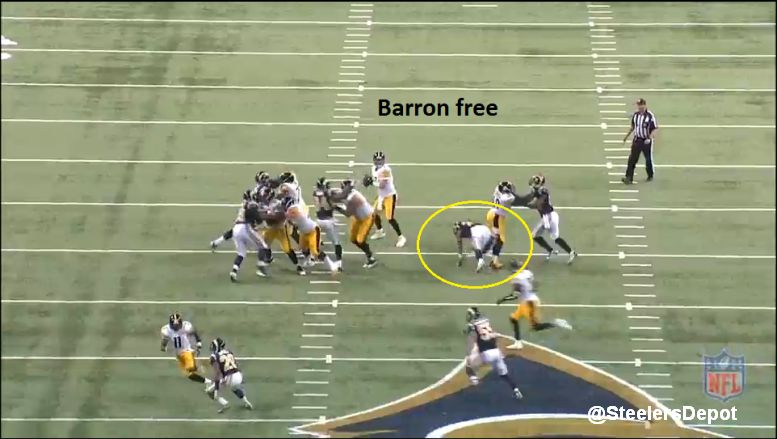 Ultimately, I can’t say with a lot of confidence. I will put it on Wallace because I believe he should have slid down the line to the overload side. But it’s up for debate.

4. 2nd and 10, 15:00 4th. 13 personnel. Eight men into block against a five man rush. Half-hearted playaction with Michael Vick who fakes right (the running back goes the other way) and then has to reset his feet given that he’s a left-handed quarterback. 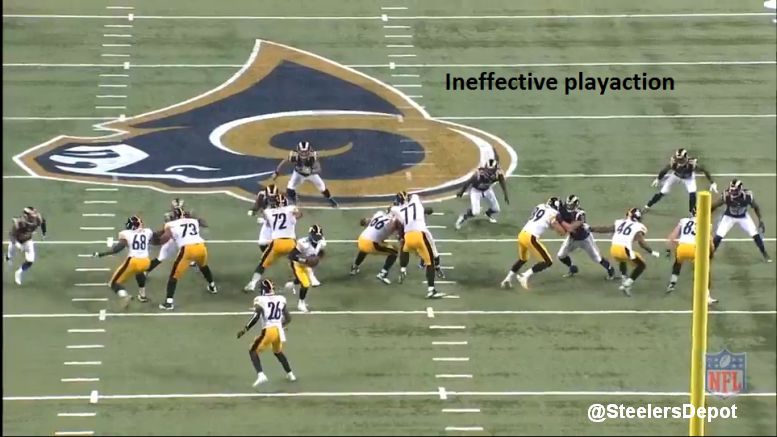 Rams run a corner blitz off the Steelers’ left side that Beachum picks up. Robert Quinn spikes hard inside into the A gap. Ramon Foster sets to his left and is forced to try and mirror inside against Quinn. Like Wallace earlier, Foster has trouble sliding as Quinn swims over. 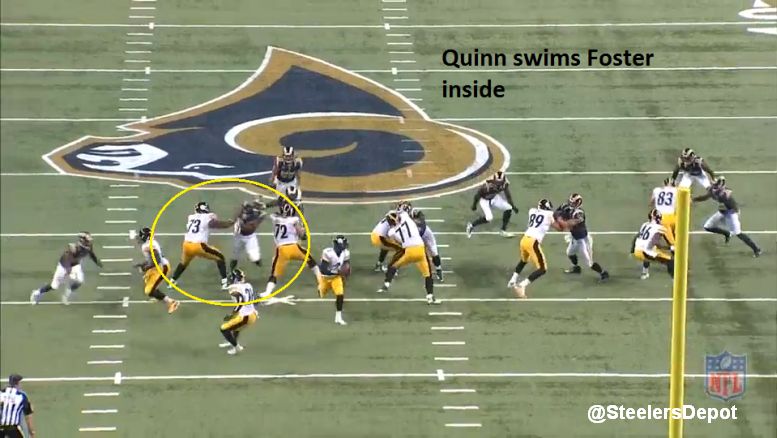 Foster opens his inside hip, giving Quinn a clear path to the QB. He strips Vick and Le’Veon Bell luckily falls onto the football. 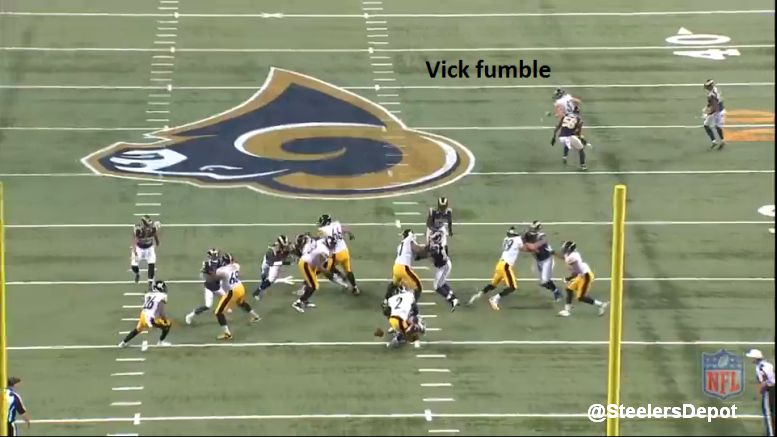 For the record, though there technically is a fifth sack, it came when Vick was running out of bounds for no gain. Officially counted as a sack but there’s not actually any blame to be given here. So I will not count it.