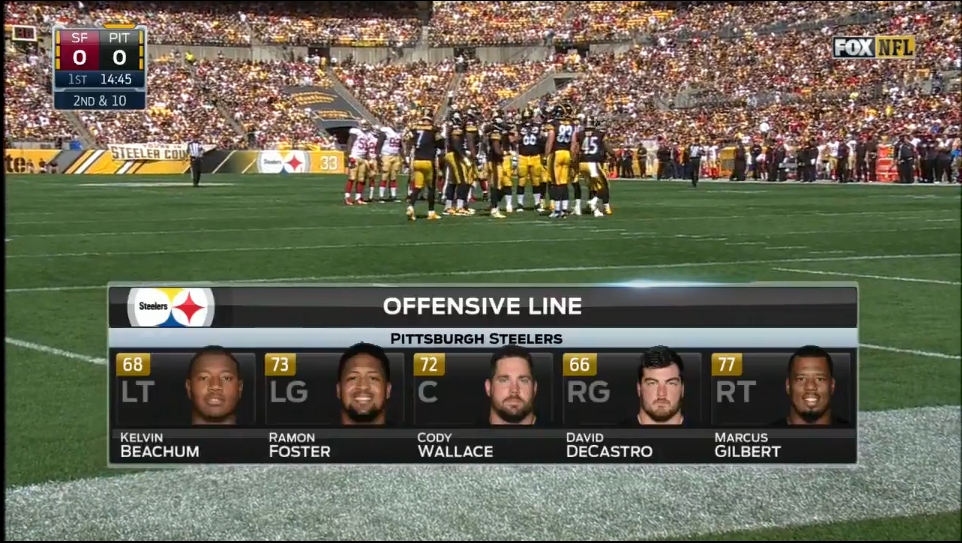 You don’t have to look far to find an analyst harping on the need for quality offensive line play in today’s NFL. Very few teams have a strong offensive front amongst their starting lineup, and even fewer have quality depth on their roster.

The Pittsburgh Steelers have been blessed with at least the former, returning all five starters from last year’s top-tier unit. Maurkice Pouncey’s broken ankle has already caused them to call upon their limited depth, and while Cody Wallace has been average at best, the rest of the unit’s play has more than made up for his inadequacies.

On Pittsburgh’s second drive of the game against San Francisco, Ben Roethlisberger was able to move through his progressions to find Antonio Brown for 59 yards, thanks in large part to the stellar protection he received.

Kelvin Beachum needs only one hand to knock Ahmad Brooks off balance, while Ramon Foster does a great job mirroring to shut off interior pressure. David DeCastro isn’t phased at all by his man, while Heath Miller and DeAngelo Williams handle Aaron Lynch with ease on the right side. Gotta love the physicality of Williams coming over to shove Lynch up the arc aggressively.

Roethlisberger aided the offensive line’s efforts by getting the ball out quickly all game, but even when he had to extend the play a bit, Pittsburgh’s front was more than equal to the task.

To be fair, I didn’t think San Francisco offered much of a threatening pass rush, never sending more than five on a blitz all game. When they did send pressure, Pittsburgh was prepared with screens and hot routes.

The offensive line was perhaps even more devastating in the run game, consistently finishing blocks and playing with a nasty edge. These traits were on display on Williams’ first touchdown run of the game, when Foster and Marcus Gilbert pancaked their men.

While Foster is embarrassing the defensive end (couldn’t catch a number) and Gilbert is welcoming Jaquiski Tartt to the NFL, Wallace is getting just enough of NaVorro Bowman to seal off the linebacker and give Williams a running lane.

Late in the game it was DeCastro and Miller pulling around the left side to clear a path for Williams to pick up ten yards to the 49ers seven.

Brooks jumps inside to avoid DeCastro’s block, effectively taking himself out of the play. Miller is able to hit and kick out Bowman in space, while Beachum chips the five technique before reaching the other inside linebacker at the second level.

It was this kind of physical dominance up front that wore down the 49ers as the game went on. Pull up the tape of the fourth quarter and tell me you see a defense playing their hearts out. You can’t. Pittsburgh didn’t just implement their game plan, they imposed their will on the young 49ers defense. That’s what great offensive fronts do, just keep punching you in the mouth until you don’t punch back. With the 49ers defense wilting in the fourth quarter after being dominated all game, Pittsburgh was able to deal the knockout blow.